Some of the best-known footballers are known for the tattoos they sport. They ink their arms, legs or torso with names of their loved ones, motivational quotes or random motifs.

Their style quotient with their elaborate tattoos is up, but many of these pieces of body art carry special meaning to the players.

Here’s a look at some of the players in the World Cup whose tattoos caught our fancy.

Chile striker Mauricio Pinilla has tattooed on his back the last-ditch World Cup goal attempt that rattled the bar in their second round defeat by Brazil, local media reported on Tuesday.

‘La Roja’ almost clinched an upset victory against the hosts in extra time on Saturday when substitute Pinilla's powerful shot struck the woodwork with Brazil fans holding their breath.

The thrilling game finished 1-1 minutes later and went to a penalty shootout, which Brazil won in Belo Horizonte to edge into the quarter-finals while devastated Chile went home.

"One Centimetre from Glory,” reads the tagline next to a drawing depicting the shot on Pinilla’s lower back. The ball hitting the crossbar radiates like a sun in the tattoo.

“He said it was an inerasable wound,” tattoo artist Marlon Parra told newspaper La Tercera. “That he hasn’t stopped thinking about that moment, in what could have happened if the ball had been a few centimeters lower.”

Just like Pinilla, soccer-mad Chile is still coming to terms with what could have been. The country of 17 million people is brimming with acid jokes that the crossbar haunts them in their sleep or is the first thing they see when they wake up.

Compounding the gloom is the fact that Brazil have now eliminated the Andean team at four World Cups, including the 1962 semi-finals when Chile hosted the tournament.

"What he wanted to do was leave a record of the suffering he's going through," Parra said of Pinilla.

Portugal's midfielder Raul Meireles flaunts tattoos all over his body. 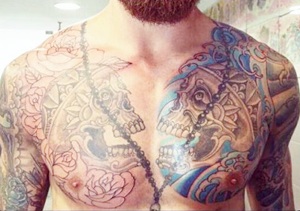 Recently his tattooed leg was snapped in Istanbul during a team training session.

The former Chelsea and Liverpool player’s right leg features a portrait of his wife next to the Blue Mosque in Istanbul, Portuguese capital Lisbon’s famous cable car, an old microphone and a rose.

He is possibly this World Cup’s most-inked man! 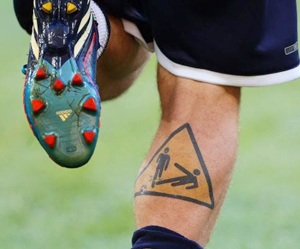 This defensive medio has a tattoo, warning 'Slide Tackles', on his calf.

He also sports coloured floral motifs inked across his arms.

Days after the birth of his son, Thiago, Argentina's ace footballer Lionel Messi had his hand imprints and name tattooed on his left leg.

A moving gesture, we say!

The four-time Ballon d’or winner also sports a portrait of his mother inked on the back of his left shoulder.

This 27-year-old is tattooed and talented. The French stud has a tribal design on his calf.

A devout Christian, the designs on his left bicep symbolises values that are important to him: faith, family, love, health and friends.

The 28-year-old Spanish defender has almost as many tattoos as he has winning medals with Spain and his club Real Madrid.

It didn't seem to help inspire the team as Spain was eliminated after their first two games.

The tribal tattoo on his right wrist is identical to the one his brother has, also inked at the same place. The centre-back also has tattoos dedicated to those killed in the terrorist attacks in the USA on 11 September 2001 and in Spain on 11 March 2004.

Ghana star Kevin-Prince Boateng has an AC Milan tattoo on one arm and a map of Africa with Ghana inscribed on other.

The Schalke star chose to remember his knee troubles by tattooing a cobweb over his left knee. The German-born player got his first tattoo at age 15.

The 27-year-old is fan of Spanish giants Real Madrid, and has a tattoo of a crown on his neck.

Brazil defender Dani Alves has several tattoos including the picture of Jesus Christ on his left forearm.

He is a man of few words, but like his game, he lets his tattoos do the talking.

This defensive midfielder carries the most important people and aspects of his life inked on his body. He also has the phrase “what doesn’t kill you makes you stronger” inked down both sides of his torso.

Neymar’s collection of tattoos is impressive. He has inked a crown for his son, David Lucca; his sister’s name (Rafaella), and several Portuguese sayings to symbolise his joy.

Ezequiel Lavezzi believes in sporting a collection of portraits of unrelated tattoos.

This Argentine has a tattoo of Diego Maradona besides tattoos of Jesus, a gun, a badge of football club Rosario Central, and a handcuffed alarm clock.

Mario Balotelli sports a lion tattoo. The Italian sensation also has his initials tattooed behind each ear and also has five characters that represent his family.

After scoring his first Premier League goal of the 2012-13 season, Balotelli got the words of Genghis Khan inked on his chest: ‘I am the punishment of God. If you had not committed great sins, God would not have sent a punishment like me upon you.’