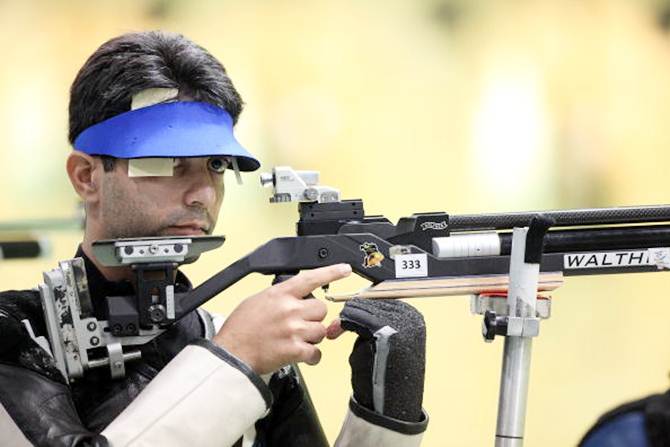 Beijing Olympics champion Abhinav Bindra was a distinct class above the rest of the field as he won his first individual gold medal at the 2014 Commonwealth Games in Glasgow on Friday.

The 31-year-old former World and Olympic champion aggregated 205.3 points to win the men's 10m air rifle event by a commanding margin of 3.2 points, at the Barry Buddon Shooting Centre, and pick his first individual gold medal at a Commonwealth Games, having won a pairs gold in Manchester (2002), Melbourne (2006) and Delhi fours years ago.

Bangladesh’s Abdullah Baki, who scored 202.1 points, won silver, while Daniel Rivers of England took bronze with a tally of 182.4 points. 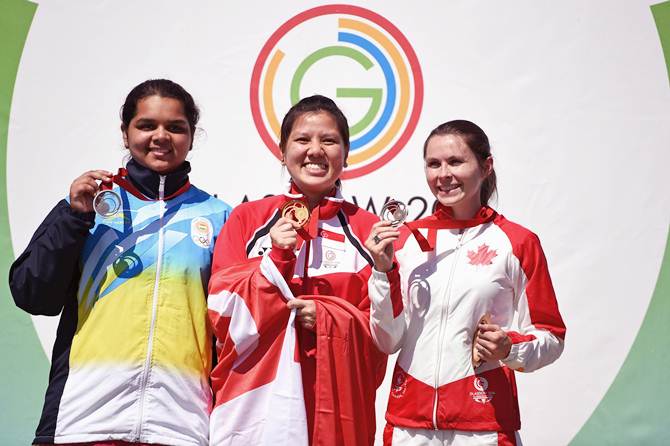 Heena Sidhu, her teammate and favourite for the gold, fell by the wayside, finishing a poor seventh.

Goel had an aggregate score of 197.1 in the final to finish second and grab her first senior international medal after a close fight for the gold on the opening day of shooting competitions at the Barry Buddon Shooting Centre at Dundee.

Singapore's Shun Xie Teo won the gold, with a total of 198.6, a Final Commonwealth Games record, while Canada's Dorothy Ludwig was a distant third with a 117.2 effort.

Former world No 1 Sinhu disappointed after topping the qualification rounds. She was the second shooter to be eliminated in the eight-woman field in the final.

Goel, who qualified for the final round at fourth, had a great start and led till the fifth of the seven round elimination stage, but lost her way in the last two rounds.

The youngster from Patiala was way ahead of the rest in the first two rounds in the first competition stage with a total of 61.7, as against Shun Xie's 58.0 and Dorothy's 60.1, with five over-10 scores and one 9.9 shot.

However, she had two very bad shots in the first two rounds of the elimination stage and scored 8.8 and 8.6.

At that stage, Canada's Dorothy was in second place and jumped to the top spot in the fifth round of the elimination stage only to be left out in the penultimate round and secure a bronze.

Sidhu, on the other hand, was third before the elimination round started but could not come up with a 10-plus shot later on and was eliminated in the second round of the final stage.