The multi-million dollar World Series Hockey suffered a huge jolt just days before its start, with six top Indian players withdrawing from the league, to be held across different cities in the country from December 17.

According to a letter addressed to Hockey India secretary-general Narinder Batra, goalkeepers Bharat Chetri and PR Sreejesh, star drag flicker Sandeep Singh, defender Sardar Singh, and forwards Tushar Khandker and Yuvraj Walmiki have preferred country over the unsanctioned league, the dates of which clash with the national camp for the Olympic qualifiers.

- 'All who have signed up for World Series Hockey will play'

'We are not playing in the World Series Hockey event and that we will be attending the national camp in Delhi for the Olympic qualifiers on December 11, 2011 until February 2012.

'We will be available for selection in the national team for the Olympic qualifiers,' said a letter issued by Hockey India, which bears the signatures of all the six players.

'We signed the contract with World Series Hockey under the impression that WSH will not force us to play and ask us to leave for the national camp.

'We play for our country and that is a matter of honour and pride for us,' the players, currently playing in the Champions Challenge I tournament in South Africa, are quoted as saying in the letter.

The players, however, did not completely rule out participation in the league and requested the WSH organisers to postpone the event.

'We appeal to World Series Hockey to postpone their tournament after the qualifiers in the national interest,' their letter adds.

The WSH organisers, however, said that they have not yet received any communication from the six players stating that they are pulling out of the tournament.

Meanwhile, Chief Operating Officer of Nimbus Sport Yannick Colaco, rubbished talk of any withdrawals, saying, "As of now we have received zero withdrawal, including all the Pakistani players. We have not heard anything from the six players."

"In fact, all the players have sent us the sizes and preferences for their kit," he added.

Colaco accused Batra of using pressure tactics on Indian players to stop them from participating in the league.

players from playing in WSH. In fact, a player told me that Batra is threatening them to withdraw from WSH or else they can't play for India," he alleged.

The International Hockey Federation (FIH) had already categorised WSH as an unsanctioned event and warned that any player participating in the league will be barred from representing their country.

Several national bodies, including Hockey India and the Pakistan Hockey Federation have also warned its players against participating in the US $2 million event. 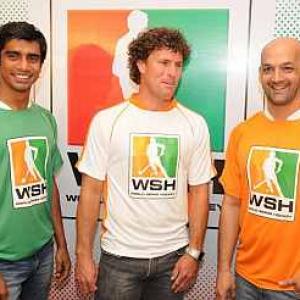 'All who have signed up for World Series Hockey will play'

'Pakistani players will not participate in WSH'