Champions League: PSG miss out on away win; Roma, Porto stroll to victory 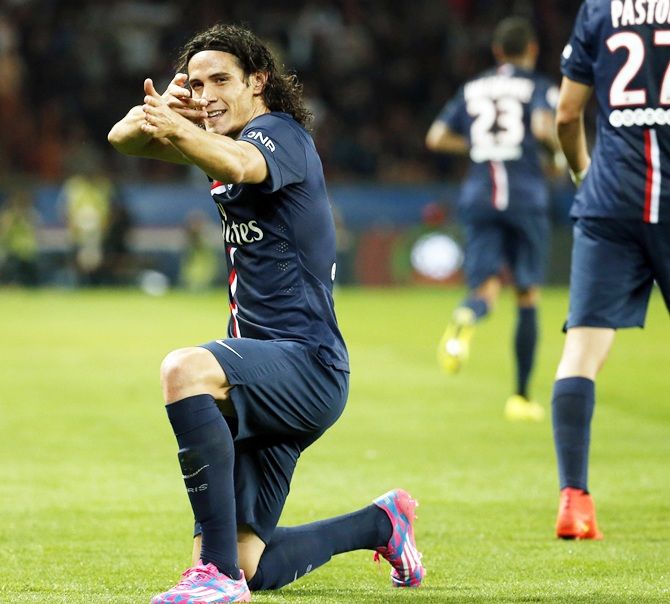 Edinson Cavani scored early for Paris St Germain but a series of wasted chances came back to haunt them as Ajax Amsterdam equalised late to deny the French a winning start on the road in a 1-1 draw in Champions League Group F on Wednesday.

"We are certainly pleased with the draw. If you look at the mistakes we made, you have to be happy with the result. In the end we came close to winning it, but that would have been unjust," Ajax coach Frank de Boer said.

PSG took the lead just as the two sides were settling into the game. An error from Nicolai Boilesen, who let a long ball slip away from him, enabled Lucas to square a pass to Zlatan Ibrahimovic and although the visiting captain's shot was blocked, Cavani tapped home the loose ball.

Brazilian Lucas was at the heart of the French champions' creativity but was also the main culprit in their profligacy.

He stole the ball straight after the break but instead of passing to the unmarked Ibrahimovic he went alone and shanked his shot horribly wide.

Ibrahimovic missed from an angle with time to set his sights and then thundered a low free kick past the Ajax wall but straight at goalkeeper Jasper Cillessen.

Hat-trick for Brahimi as Porto stroll to victory 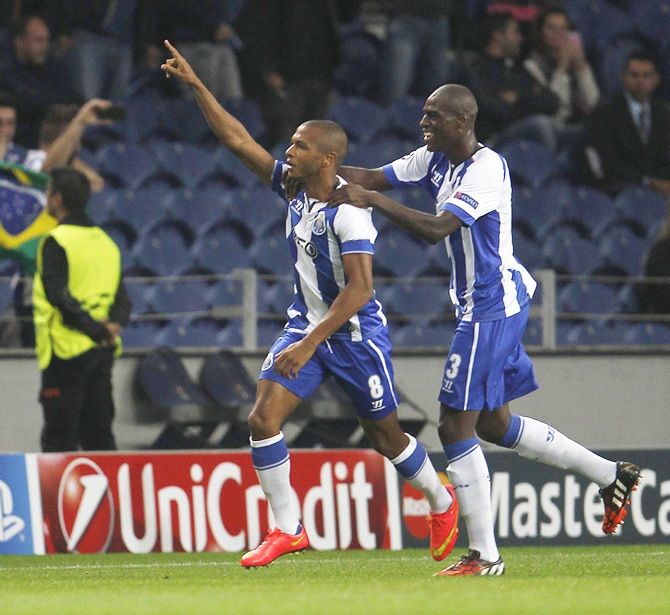 Algeria midfielder Yacine Brahimi scored a hat-trick to help Porto crush blunder-prone BATE Borisov 6-0 in the Champions League on Wednesday, their biggest-ever win in the competition.

The performance sent a warning to Group H rivals Athletic Bilbao and Shakhtar Donetsk, although the Belarus champions proved feeble opposition and contributed to their own downfall with a series of defensive errors.

Porto, Champions League winners ten years ago under Jose Mourinho, have quickly been revitalised by former Spain under-21 coach Julen Lopetegui, winning six and drawing one of their seven matches this season.

Lopetegui was brought in after a relatively poor last season when Porto finished third in the league and fell in the Champions League group stage.

Brahimi, making his Champions League group debut, took full advantage of BATE's generosity, starting with a gift from BATE goalkeeper Sergei Chernik in only the fifth minute. He miscued a throw straight to Brahimi, who ran into the penalty area and hit the ball high into the net from a narrow angle. Brahimi, who represented France at all age levels from Under-16 to Under-21 before declaring for Algeria, added a fine solo goal after 32 minutes, running from the halfway line and veering inside before shooting in off the far post. As Porto's dominance continued, Colombia forward Jackson Martinez volleyed against a post before scoring the third in the 37th minute. Martinez also headed against the bar early in the second half but the home crowd did not have to wait long for further goals.

Brahimi curled in a superb free-kick for his hat-trick after 57 minutes and four minutes later substitute Adrian Lopez, who appeared in last season's final for Atletico Madrid, scored the fifth. Vincent Aboubakar, substituting for Martinez, completed the rout with quarter of an hour left as Porto surpassed their previous biggest victory in the competition, a 5-0 away success against Werder Bremen 20 years ago. 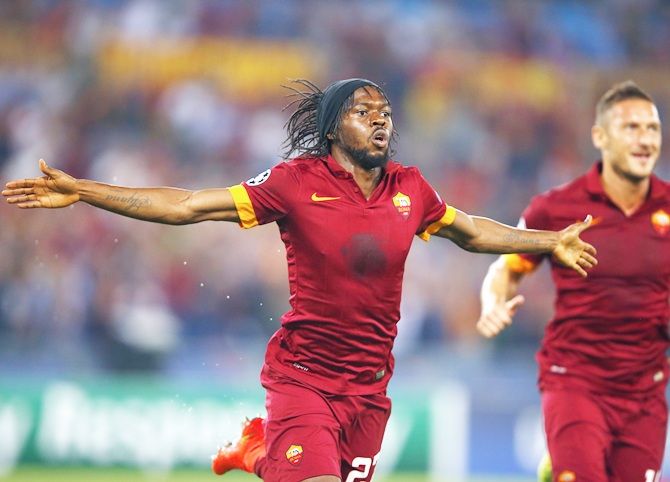 Forward Gervinho and 37-year-old captain Francesco Totti produced virtuoso performances to help AS Roma maul a shambolic CSKA Moscow 5-1 against an ugly backdrop of crowd violence in the Champions League on Wednesday.

Gervinho scored twice and set up another goal for new signing Juan Iturbe as Roma raced to a four-goal lead in just over half an hour against the Russians, who were well out of their depth at the Stadio Olimpico.

Totti, starting his 23rd season at his only professional club, orchestrated the win, spraying passes around effortlessly from midfield in the Group E match.

There were ugly scenes in the second half as CSKA fans let off flares in the stands and fought with stewards, before riot police were called in to stop the trouble.

Roma, back in the Champions League for the first time since 2010/11, got off to a flying start when Gervinho created an opening for Iturbe and the 20 million euro signing from Verona slotted past Igor Akinfeev in the sixth minute.

Iturbe returned the compliment four minutes later as he picked out Gervinho and the Ivorian produced some nifty footwork to fire home the second.

Ten minutes later, Maicon got behind the CSKA defence on the right and scored with a shot which slipped through the demoralised Akinfeev's hands.

Totti set Gervinho free with an exquisite first-time pass and the Ivorian cut inside his marker, leaving him sprawling on the pitch, before firing the fourth after only 31 minutes.

CSKA suffered another defensive disaster when Sergei Ignashevich headed past Akinfeev five minutes after halftime, although the Russians pulled themselves together after that.

Ahmed Musa pulled one back with eight minutes left, the first goal Roma have conceded this season.

Bilbao thwarted by Shakhtar on return 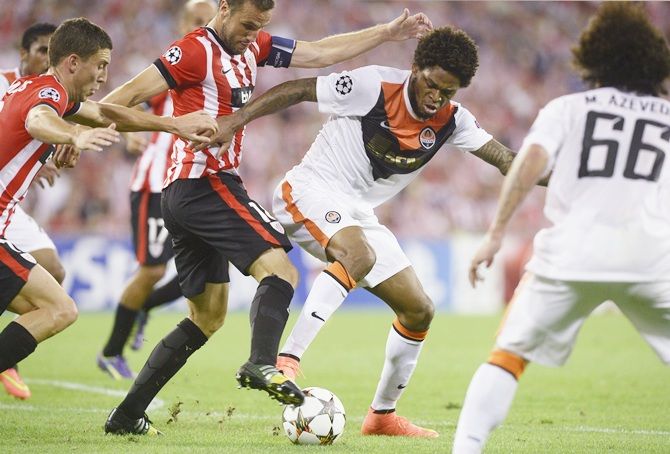 Athletic Bilbao failed to mark their Champions League return with a victory when they were held to a 0-0 draw at home to Shakhtar Donetsk in their Group H opener on Wednesday.

The contest at Bilbao's impressive new San Mames stadium was evenly-matched, with both sides creating plenty of chances and the home side perhaps narrowly having the upper hand.

Bilbao goalkeeper Gorka Iraizoz was nonetheless voted man of the match after the 33-year-old denied Darijo Srna in the first half and Douglas Costa in the second to help secure a point for the Basque side.

"We struggled a bit in the second half and we were unable to get on the end of crosses but a point is positive," he added.

"Shakhtar are very quick in attack, they are like bullets. We all wanted to win, but Shakhtar are a great team. They have been playing this way for 15 years."

Shakhtar midfielder Taras Stepanenko said his team had "controlled the game in the first half and most of the second".

"We got one point and didn't concede which is the most important," he told.

"We analysed them. The coach told us how they would play in attack and we were able to shut them out."

© Copyright 2022 Reuters Limited. All rights reserved. Republication or redistribution of Reuters content, including by framing or similar means, is expressly prohibited without the prior written consent of Reuters. Reuters shall not be liable for any errors or delays in the content, or for any actions taken in reliance thereon.
Related News: Gervinho, CSKA Moscow, Yacine Brahimi, Shakhtar Donetsk, Athletic Bilbao
COMMENT
Print this article 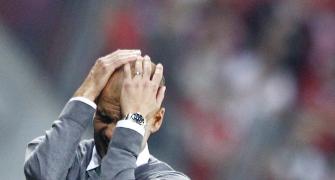 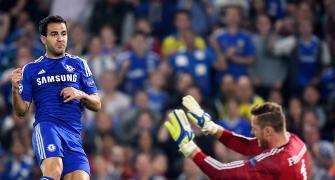 Fabregas scores but Schalke stop Chelsea juggernaut in its tracks 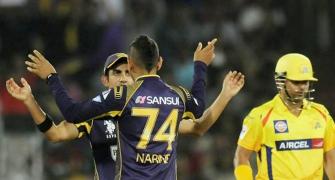 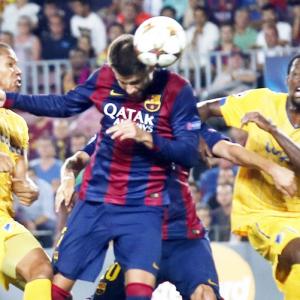 Champions League: Barca do the bare minimum to win against APOEL 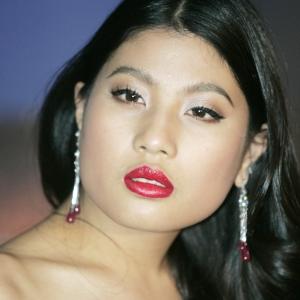