World's second youngest Grandmaster ever Parimarjan Negi succumbed to his third straight loss, going down to Fabiano Caruana of Italy in the third round of the Young Grandmasters tournament of the 43rd Biel Chess Festival in Biel.

Luckless till now, Parimarjan could not find his rhythm for the third day running and the Indian now stands to lose a huge amount of rating points if he does not recover quickly in this 10-players round-robin tournament.

Wesley So of Philippines benefited from a 11th hour blunder by Maxim Rodshtein of Israel to emerge as sole leader on 2.5 points after the third round.

Caruana and Evgeny Tomashevsky of Russia, who drew with compatriot Dmitry Andreikin, share the second spot with two points apiece.

With six rounds to come, top seeded Maxime Vachier-Lagrave of France, Nguyen Ngoc Truong Son of Vietnam, Anish Giri of Holland, Rodshtein and Andreikin share the fourth spot on 1.5 points each while David Howell is on their toes with two draws to his credit so far. Parimarjan is yet to open his account.

Playing white for the first time in the tournament, Parimarjan's hunt for an elusive account opener did not end.

Surprisingly, he went for the Closed Sicilian, an opening that he had not played before and though it carried the initial surprise value, it also turned out to be something in which experience was lacking for the Indian.

Caruana, a former winner of the 'B' group of Corus Chess tournament is now a seasoned campaigner and he sensed his chances in a timely onslaught on the queen side.

Parimarjan could not find adequate ways to counter that and by the 20th move Caruana had wrested the initiative.

A simple trick was overlooked by Parimarjan on another bad day in office and the game folded in just 28 moves.

Wesley So played a fashionable line in the Grunfeld and came with a theoretical improvement to hold his fort against Rodshtein. The game developed on an even keel and it was a tense position when Rodshtein Blundered on his 38th move and fell in checkmate web.

The other three games of the day ended in draws. David Howell played an unusual set up in the Petroff defense game against Giri and signed peace in a mere 27 moves. The all Russian encounter between Tomashevsky and Andreikin was an even quicker 22-move draw while Vachier-Lagrave fought on for 54 moves against Truong Son before splitting the point. 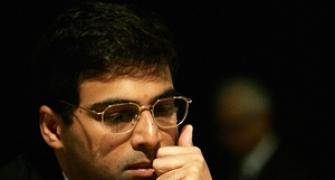