The simmering tension on the India-Pakistan border spilled over to the sporting arena on Tuesday, with a rattled Hockey India deciding to send back all the nine Pakistani players taking part in its high-profile league following protests over the killing of Indian soldiers.

After protests by the Shiv Sena and other right-wing organisations disrupted the training and first match of the league, Hockey India considered the "extra-ordinary circumstances" and asked the players to return.

"After discussion with all the stakeholders, the Hockey India and Pakistan Hockey Federation have mutually decided to send them (Pakistan players) back due to an extra-ordinary situation which has arisen," Hockey India secretary-general Narinder Batra told reporters in Delhi.

"We and PHF have mutually decided to release the players so that they do not feel the mental stress and their performance is not affected," Batra added.

Batra said the franchises, who had to release the Pakistani players, were free to seek replacements.

"We will give the right to franchises which own Pakistani players that they can ask for replacements. They can select from the reserve pool within their allocated budget," Batra said.

Hockey India had initially decided to send back the Pakistani players of the Mumbai Magicians franchise only but fearing that the league could be affected by disruptions, it took the decision to send back all.

The league ran into rough weather after the killing of two Indian soldiers allegedly by the Pakistan army on January 8 in Poonch sector of Jammu and Kashmir.

Mumbai Magicians, based in Mumbai, became the obvious target because of its large number of Pakistani recruits and the presence of right-wing outfit Shiv Sena's stronghold on the city.

Over 100 Sena workers had protested the participation of Pakistani players in the Mumbai franchise and disrupted the scheduled practise session on Sunday. This prompted the team management to shift base to Delhi.

On the inaugural day, two supporters from Hindu Yuwak Sabha attempted to invade the turf at the National stadium, the venue where the opening match between Delhi Waveriders and Punjab Warriors was on Monday.

The Mumbai team is scheduled to play its first match against Delhi in the capital tomorrow. Their first home match in the tournament is scheduled for January 20, against the Punjab team. 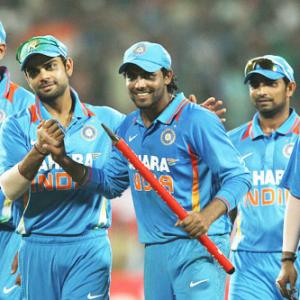