Nadal-slayer Muller emerges from the shadows to march forth

Although he had beaten Nadal 12 years ago at Wimbledon, few gave Luxembourg’s Muller a chance on Monday against the fourth seed and French Open champion. 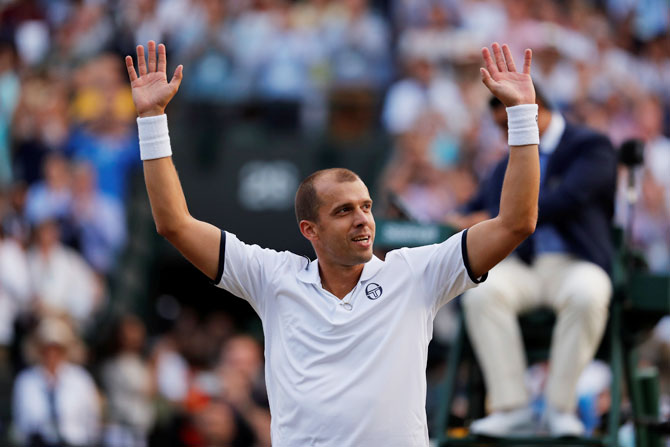 This time last year Gilles Muller was an unheralded 33-year-old journeyman from Luxembourg without a single title on the ATP Tour.

One of the many men who travel the world, playing in the less noticed tournaments, picking up the more modest appearance fees, Muller's record and age suggested he would end his career as barely a footnote in the annals of the sport.

His second round appearance at the All England Club last year was barely noticed, understandably for a player who had made the last eight at a grand slam event just once in his career -- at the US Open in 2008.

On Monday though, the left-hander produced one of the most memorable upsets in the history of Wimbledon -- beating 15-times grand slam winner Rafael Nadal in an astonishing 6-3, 6-4, 3-6, 4-6, 15-13 battle that lasted four hours and 48 minutes.

Muller puts his delayed emergence down to a 2013 elbow injury that, almost threatened his career, kept him off the courts and let him work on fitness and other aspects of his game. "Since 2014 when I came back, I'm able to play full seasons without any breaks during the season. I have a lot of confidence in my body now, which I didn't have before.

"All this is changing a lot for me. For sure that has been the key for me in the last few years, to be that successful."

While viewed as a grasscourt specialist, he can be an awkward opponent with his fondness for old-school serve-and-volley play.

Although he had beaten Nadal 12 years ago at Wimbledon, few gave him a chance on Monday against the fourth seed and French Open champion.

But Muller has risen up the rankings this year, capturing his first two titles on the tour, in Sydney earlier this year and then on grass at Den Bosch in the lead up to Wimbledon.

He is ranked 26th in the world but his comfort on grass earned him a 16th seed at Wimbledon -- a placing that he has more than justified.

Cool to the point of being emotionless, Muller coped with giving up a two-set lead to the Spaniard and then continued, unruffled, through the marathon two hours 15 minutes final set before finally sealing victory. 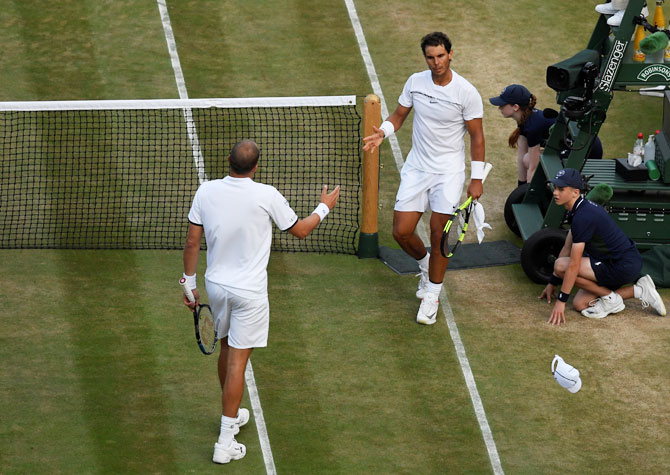 Muller had been unable to take advantage of four match points prior to the decisive game and when he finally clinched victory, the calmness he had shown throughout the match remained.

"A lot of relief. I had those match points before. I mean, the noise the crowd made every time he saved a match point was just massive," he said.

"So at that moment ... in my head I was thinking, 'We have to finish this now or otherwise we're going to come back tomorrow'. I knew it was going to be maybe another 10, 15 more minutes maximum.

"Just a lot of relief to finally get it done."

Next up for Muller is seventh-seeded Croatian Marin Cilic, who beat him on grass last month in the semi-finals at Queen's Club.

"It's going to be a tough match, for sure," said Muller.

Maybe but after Monday's magnificent heroics, who would bet against the man from Schifflange, population 9,332, producing another upset?

© Copyright 2020 Reuters Limited. All rights reserved. Republication or redistribution of Reuters content, including by framing or similar means, is expressly prohibited without the prior written consent of Reuters. Reuters shall not be liable for any errors or delays in the content, or for any actions taken in reliance thereon.
Related News: Gilles Muller, Rafael Nadal, IMAGE, All England Club, Queen's Club
SHARE THIS STORYCOMMENT
Print this article PHOTOS: Muller knocks out Nadal; Federer and Murray sail through Nadal makes no excuses after 'lost opportunity' in thriller