India's leading discus thrower Vikas Gowda kept himself in medal contention by qualifying for the final round at the London Games. He finished top of Group A and fifth overall with an impressive performance at the Olympic stadium.

The United States-based Gowda started with a throw of 63.52m, but hurled the 2kg disc to a distance of 65.20m in his second attempt to book an automatic berth in the final round, to be held on Tuesday, 7:54 pm local time (1215 IST Wednesday).

The final round entry standard was set at the 65m mark or the best 12.

Gowda is also only the second Indian to make the final in track and field at the ongoing Games, after Krishna Poonia, who eventually finished seventh in women's discus throw. 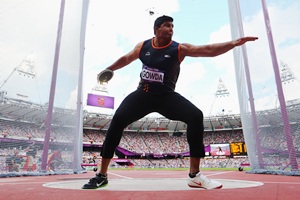 The 29-year-old Gowda's fine effort brought some cheer to the Indian contingent which has so far failed to make much of an impression in the athletic arena. He was one of the six throwers who secured automatic qualification by clearing the 65m mark.

"The first throw slipped out of my hand but I knew the second was a good one. My first aim to qualify and I have achieved that," Gowda said.

He went on to add that the 10 am start made him feel a little sluggish.

"It's 10 O'clock so I'm feeling pretty sluggish but I am confident for the final. I just need to stay relaxed and stay focussed," he said.

All the other throwers also began sluggishly, including defending champion Gerd Kanter of Estonia who eventually topped the final standings by winning the other group with a 66.39m effort in his third and final throw.

Though Gowda qualified for the final round in fifth place, he will have a tough job at hand if has to win a medal as 10 other qualifiers out of the 11 are above him at the latest IAAF rankings having better season's best than him.

Reigning World champion Robert Harting of Germany qualified in second place behind Kanter with a qualification round throw of 66.22m. He is the current world leader, with a season's best of 70.66m.