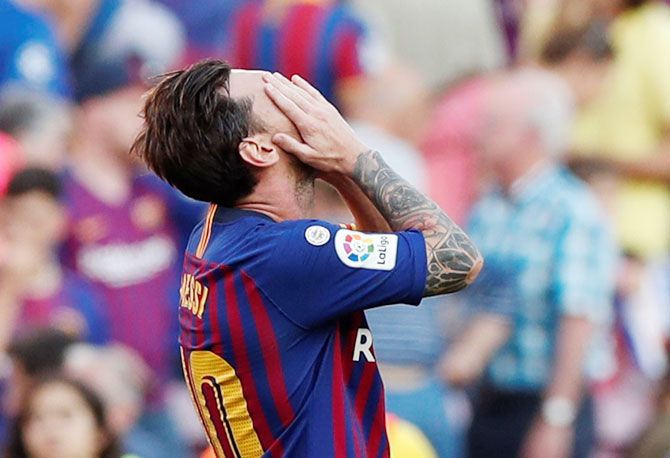 Barcelona captain Lionel Messi says the La Liga champions are "angry" about dropping seven points in their last three league games after he came off the bench to help his side scrape a 1-1 draw at home to Athletic Bilbao on Saturday.

Messi was a surprise absentee from the starting line-up, along with Sergio Busquets, but he and the Spain midfielder were both called into action in the second half after Oscar de Marcos had put the visitors ahead.

The Argentinian hit the woodwork for the seventh time this season as Barca desperately chased an equaliser following their 2-1 defeat at lowly Leganes on Wednesday and 2-2 draw with Girona last weekend, eventually providing the cross for Munir El Haddadi's 84th-minute leveller.

"We are not anxious because the season is long and has only just started, but we are angry about the last results," Messi told reporters.

"We didn't expect them.

"Against Leganes we played well in the first half and lost, and today we created chances to win but couldn't."

De Marcos's volley was the eighth goal the La Liga champions have conceded in seven games this season and Messi said his side urgently needed to improve in defence.

"We are aware that we have to be much stronger defensively," added Messi, who inherited the Barca captaincy from the departed Andres Iniesta this season.

"Last year we hardly conceded goals but now teams are scoring against us with their first attempt. We cannot afford to concede goals in every game.

"We have to improve and become stronger in defence, which is the most important thing."

Messi's strike partner, Luis Suarez, also criticised the team's display and said they needed to rid themselves of their dependence on their all-time top scorer.

"He is the best in the world but we can't rely on Leo to always sort everything out for us," Suarez said.

"The other players here are here on our own merits and we can't depend on him or Busquets, we should have been winning when they came on to the pitch."

The Argentinian, asked about Suarez's comments, said he agreed with his teammate.

"We have the squad and the players to be a great team and not depend on anyone, like it always used to be at Barca," Messi added.

Eight soccer fans were taken to hospital in Spain on Saturday after a barrier collapsed at La Liga side Eibar's Ipurua stadium as Sevilla supporters celebrated a goal during a 3-1 win.

"In the end, and pending confirmation from the emergency services, eight Sevilla supporters have been taken to Mendaro hospital. None of the injuries are serious," said Eibar in a statement on their official Twitter account.

The barrier collapsed as dozens of travelling supporters standing behind the goal spilled on to the pitch after Ever Banega converted a penalty in the 58th minute to put Sevilla 2-0 up.

Play was stopped for eight minutes while stewards and emergency services attended the supporters.

In a message on Twitter, Sevilla dedicated the win to the fans affected.

"Three goals and three more points in Ipurua. The victory is dedicated to our supporters who suffered today in the accident in the stand. We hope they recover soon," said the club.

© Copyright 2021 Reuters Limited. All rights reserved. Republication or redistribution of Reuters content, including by framing or similar means, is expressly prohibited without the prior written consent of Reuters. Reuters shall not be liable for any errors or delays in the content, or for any actions taken in reliance thereon.
Related News: Lionel Messi, FC Barcelona, Sevilla, Eibar, Leganes
COMMENT
Print this article 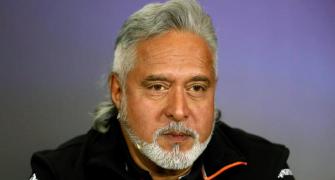 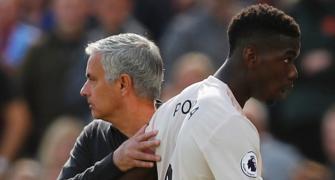 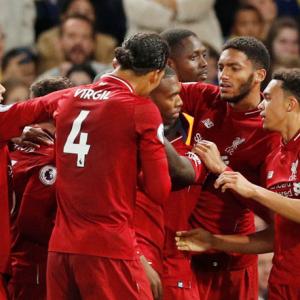 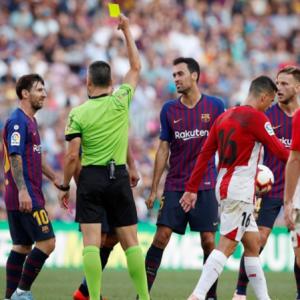