The 20-year-old Indian, who made it to the main draw through the qualifiers, came back from one game down as he won the remaining two in stunning fashion to shock the former world number one and 2004 Athens Olympics gold medallist 15-21, 21-12, 21-17 in a 52-minute gruelling first round contest.

The world number 55 Indian, now runs into world number one and 2012 London Olympics silver medallist Lee Chong Wei of Malaysia, in the pre-quarterfinals on Thursday.

Three other Indians -- Ajay Jayaram, RMV Gurusaidutt and Sourabh Verma -- also reached the pre-quarterfinals but it turned out to be a bad day in office for world number 10 Parupalli Kashyap as he crashed out of the men's singles competition. 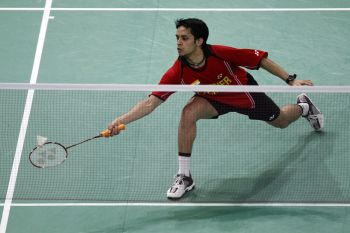 The 26-year-old Kashyap was not in his elements and was completely outclassed by former world number six Sho Sasaki of Japan 7-21, 8-21 in his campaign opener, which lasted just over half an hour.

However, world number 28 Jayaram, Gurusaidutt and Varma notched up victories later in the day to keep India afloat in the men's singles event.

Jayaram will take on fourth seed Sony Dwi Kuncoro, who had won the silver medal at the 2007 World Championship in Kuala Lumpur. Gurusaidutt will meet the winner of the match between seventh seed Dane Jan O Jorgensen and Japan's Kazumasa Sakai.

Varma prevailed over Hans-Kristian Vittinghus of Denmark 19-21, 21-14, 21-15 in a one-hour-five-minute first round contest. He takes on third seed Chinese Pengyu Du in the pre-quarterfinals

In the women's doubles, Indian pair of Pradnya Gadre and Ashwini Ponnappa beat Mingtian Fu and Lei Yao of Singapore 21-16, 15-21, 22-20 in 47 minutes. They now take on Indonesian duo of Anneke Feinya Agustin and Della Destiara Haris in the pre-quarterfinals.

However, it was curtains for Aparna Balan and Siki Reddy as they suffered a 12-21 17-21 defeat to local combo of Gebby Ristiyani Imawan and Tiara Rosalia Nuraidah in another women's doubles first round match.

Praneeth was the clear winner on net play as he won 21 points from that as against 12 by his more-fancied opponent.

The Indian trailed all through the first game and he tried top catch up from 3-11 down but to no avail though he closed the gap to 12-13 at one stage.

The second game, however, changed the complexion of the match completely in favour of the Indian. After the two were locked at 9-9, Praneeth left behind Hidayat and scored five straight points before pocketing the second game to take the match to the decider.

After making a fine comeback, Praneeth ensured that the hard work did not go waste and he raced to a 5-0 lead in the decider though the vastly experienced Hidayat closed the gap to just one point by winning five straight points to make it 8-9.

However, the rising Indian was not the one to cave in under pressure and he reeled off four straight points and maintained his lead till the end.

Jayaram found the going tough against Riyanto right from the start and was lagging 9-14 but the Indian slowly clawed back with five straight points and then reeled off four points on the trot to move to 19-15.

Riyanto caught up at 20-20 but the Indian managed to pocket the first game by capturing the next two points.

In the second game, Riyanto showed his mettle and opened up a 5-1 lead and then held his fort to bounce back into the game rather comfortably.

However, in the decider, Jayaram got his act together and distanced himself from 4-4. The Indian started dominating the proceedings and knocked off six points on the trot to further consolidate his position and eventually seal the issue.

In the other men's singles match, Gurusaidutt rode on his powerful smashes to tame Andre. Although, the first game was a rollercoaster ride for both the players as leads exchanged hands quite often, the Indian had his nose ahead after a hard-fought battle.

In the second game, Gurusaidutt was more in control and after an early fight, he managed to create a gulf and hanged on to the lead to emerge victories in the end. 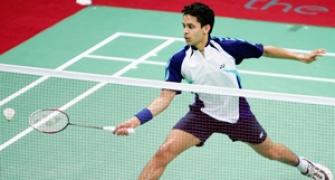 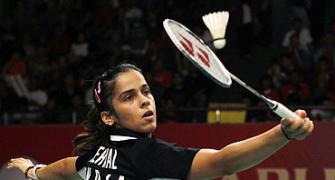 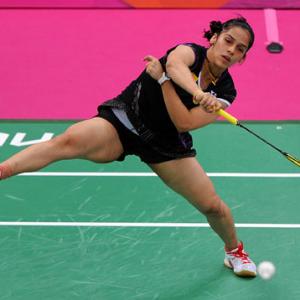