Egged on by a capacity crowd at the Siri Fort Sports Complex, the fourth seed mixed doubles pair of Saurav Ghosal and Joshna Chinappa came out with a heartening performance to lead the Indian charge in the squash team events of the Commonwealth Games.

Chennai-girl Chinappa, who paired up with Saurav Ghosal in the mixed doubles category after Dipika Pallikal pulled out of the Commonwealth doubles events due to a mild fever, ably supported her Kolkata partner Ghosal in front of the capacity crowd, vociferously cheering for them.

The pair defeated Cayman Island's Marlene West and Cameron Stafford 11-6, 9-11, 11-5 in 30 minutes. They will next take on Scottish ninth seed pair of Alan Clyne and Frania Gillen Buchert.

In the first game, both were classy in their approach and execution of shots and dead drops for winners. The next saw some fiery exchange of long rallies and backhand winners before the Indian pair committed a slight error of judgment to hand over the second game to their opponent.

In the decider, Ghosal-Chinappa pair showed athleticism with soft drop shots and dying length to the back corners to win on 11-5 points and seal the issue.

"We both played really well today. Joshna is a good player and we have paired up before so we know each other's game well. I am particularly happy that we rose to the occassion in front of the home crowd after Dipika opted out of the event due to her illness," Ghosal said.

"Saurav has been great with the ideas and I need to just implement it in my game. We have given good performance as a pair and adopted well to the situation. We are hopeful of performing well in the remaining matches," Chinappa said.

Earlier in the day, the pair rallied from a set down to secure a win over unseeded Ugandian pair of Michael Kawooya and Ian Rukunya 8-11, 11-4, 11-3 in 26 minutes.

Indians maintained their focus to the optimum throughout the match and scored a deserving win over their lesser known opponent.

It was business as usual for both Sandhu and Jangra who were classy in their approach and execution of shots and dead drops for winners. The 8th seed pair of Siddharth Suchde and Gaurav Nandrajog also won their encounter against unseeded Kenyan pair of Hartaj Bains and Hardeep Reel 11-6, 11-9 in just 11 minutes.

Both displayed some excellent volleys and good groundstrokes to outclass their lesser known opponent.

But, in the women's doubles event, unseeded pair of Anaka Alnakamony and Surbhi Misra went down fighting to 8th seed pair of Malaysia's Delia Arnold and Low Wee Wern 11-7, 11-4 in 26 minutes in their respective group.

The chances of their advancing further in their group look bleak as they will be up against third seed English pair of Jenny Duncalf and Laura Massoro on Sunday at the center court.

Meanwhile, in the morning session, both Suchde and Nandrajog failed to rise on the occassion and went down fighting to Scotland's ninth seed pair of Lyall Paterson and Chris Small 11-8, 11-8 in 43 minutes.

Top seed English pair of Nick Matthew, who on Friday won the Commonwealth gold medal in the singles event, and Adrian Grant displayed some of their famed dead drop winners to reduce their opponents to a mere spectator.

The Australian second seed pair of Boswell and Palmer defeated Bostwania's Lekgotla Mosope and Lefika Ragonste 11-3, 11-0 in the men's doubles in just 18 minutes while in the mixed doubles category, Brown and Pilley defeated Canada's Samantha Cornett and Robin Clarke 11-1, 11-3 in 16 minutes. 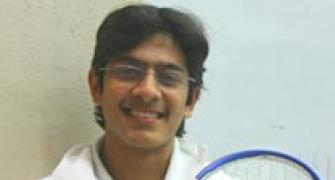 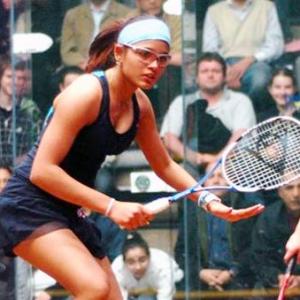 Pallikal knocked out of Australian Open