Tottenham Hotspur and Schalke 04 belied their reputations to knock seven-times winners AC Milan and twice finalists Valencia out of the Champions League on Wednesday with performances that went entirely against type.

Tottenham had pledged not to sit back and defend their 1-0 lead from a tempestuous first leg in Milan but that was exactly what they did, escaping with a goalless draw thanks to an unimpressive night in attack from Zlatan Ibrahimovic and co.

Surprisingly, it fell to Schalke to supply the outstanding forward display as they shrugged off poor Bundesliga form and intense pressure on coach Felix Magath to beat Valencia side 3-1 and win 4-2 on aggregate.

Jefferson Farfan was the hero for Schalke, with two wonderful goals in a barnstormer in Gelsenkirchen, where fans have been used to seeing more grim-faced defending than attacking greatness in a difficult league season.

Wednesday's games were inevitably something of a comedown after Barcelona's heady win over Arsenal on Tuesday.

While Tottenham were never likely to match the Catalans for panache it was still a surprise to see them take such a pragmatic approach against Milan.

Tottenham racked up 18 goals in the group stage, playing with a bravado that seemed to wilfully invite trouble, but back at White Hart Lane in the knock-out phase they packed the defence and let Milan come at them.

The surprise tactic made for a tense evening for their fans but, in truth, Milan created only a few clear chances, with Robinho missing the two best -- a weak effort that William Gallas cleared off the line and a shot that fizzed just over right at the end.

Milan, who have not reached the quarter-finals since they last won the competition in 2007, had plenty of possession but their attack was more blunt instrument than the fine blade required.

Schalke had no such problems thanks to the razor-sharp Farfan but they also had much-admired goalkeeper Manuel Neuer to thank for victory on a night when they really chanced their arm.

Valencia took the lead with a Richard Costa header in the 17th minute before Farfan curled in a free kick for the equaliser to launch the comeback.

The 21-year-old Swiss Mario Gavranovic made it 2-1, playing pinball with a shot that went in off both posts before Farfan rounded off the evening with a glorious run and chip over the Valencia keeper.

"I hope I gave our fans something to smile about," Farfan said.

Schalke, down in 10th in the Bundesliga, are through to the quarter-finals for the second time since 2008, while Tottenham have to look back to 1962 for the last time they reached such European Cup heights.

They joined Barcelona and Shakhtar Donetsk, who pulverised AS Roma on Tuesday, in the draw for the last eight, with the remaining four places to be decided next week.

© Copyright 2022 Reuters Limited. All rights reserved. Republication or redistribution of Reuters content, including by framing or similar means, is expressly prohibited without the prior written consent of Reuters. Reuters shall not be liable for any errors or delays in the content, or for any actions taken in reliance thereon.
Related News: Tottenham, Valencia, Schalke, Jefferson Farfan, AC Milan
COMMENT
Print this article 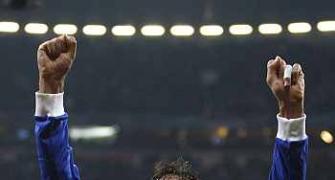 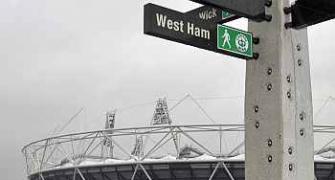 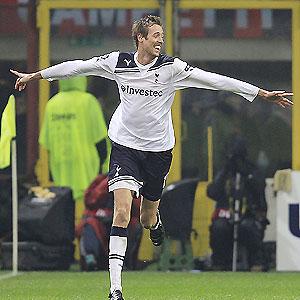