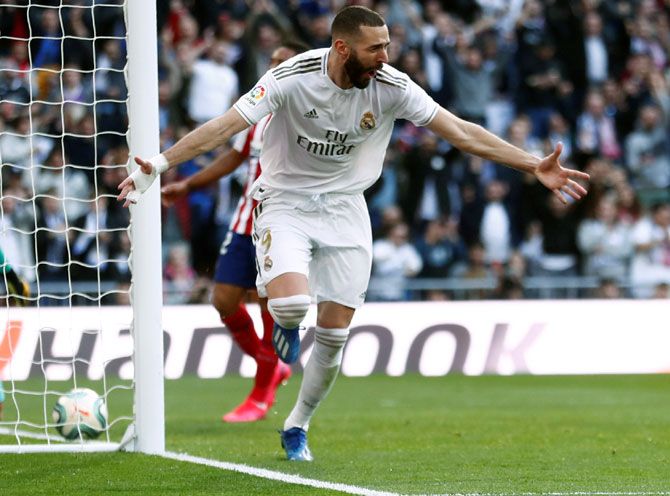 The French forward side-footed home a cross from compatriot Ferland Mendy to break the deadlock in a tight game in the 56th minute after coach Zinedine Zidane had sprung a double substitution to give his team more width.

Zidane had begun the match with a compact narrow formation containing five midfielders but after failing to break down Atletico he hauled off Toni Kroos and Isco at the start of the second half for natural wingers Lucas Vazquez and Vinicius Jr.

Brazilian teenager Vinicius helped burst open a stubborn Atletico with some patient play in midfield, taking out three defenders by releasing Mendy who needed only one touch to pick out Benzema in the area.

Atletico rarely looked like troubling a Real defence that have only conceded 13 goals in 22 league games this season, although they had a strong penalty appeal turned down when Casemiro sent Morata to the ground in the first half.

Benzema's strike gave Real their first home victory over Atletico in the league since 2012 and increased their lead over Barcelona at the top of the table to six points. Barca can reduce the margin to three if they beat Levante on Sunday.

Atletico are fifth and trail their local rivals by 13 points, while their injury problems deepened when striker Alvaro Morata limped off early in the second half with a suspected muscle problem.

Morata's injury swelled Atletico's list of injured players to seven, less than three weeks before they are due to host holders Liverpool in the last 16 of the Champions League.

The defeat piled further pressure on coach Diego Simeone, who has failed to win any of his last five games and is enduring his worst spell since taking charge of the club in December 2011. Bayern Munich scored three goals in the opening 26 minutes to defeat Mainz 05 3-1 away on Saturday and go two points clear at the top of the Bundesliga with their sixth straight win.

Top scorer Robert Lewandowski headed in his 22nd league goal in the eighth minute and Thomas Mueller and Thiago Alcantara added two more to lift the Bavarians to 42 points, two ahead of RB Leipzig who face Borussia Moenchengladbach later.

Bayern's fast start was enough to kill off the game and Mainz, who cut the deficit on the stroke of halftime through Jeremiah St Juste, rarely threatened although Leandro Barreiro hit the post.

The Bavarians also set a club record with 58 goals in their 20 league games in a boost for interim coach Hansi Flick, whose future at the club is still unclear.

Jadon Sancho opened their account in the 13th and teenager Haaland added another five minutes later.

Dortmund scored twice more after the break through Marco Reus and Axel Witsel before Haaland drilled in his second for the Ruhr valley club's third straight league win this year.

PSG thrash Montpellier, who have two sent off as tempers flare 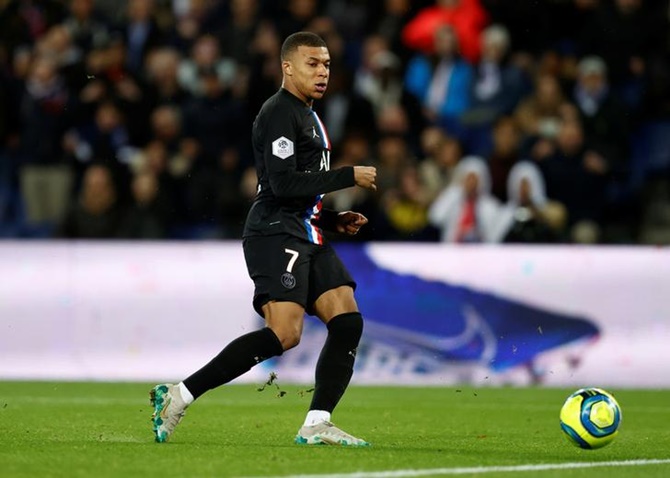 Paris St Germain demolished Montpellier 5-0 at the Parc des Princes to open a provisional 13-point lead at the top of Ligue 1 after the visitors finished with nine men as tempers flared on Saturday.

It was far from a perfect evening for PSG, however, as Mbappe showed his frustration as he was being replaced in the second half and Neymar had an argument with referee Jerome Brisard at the break after being fouled repeatedly.

Montpellier, who had keeper Dimitri Bertaud sent off after 17 minutes with midfielder Joris Chotard also picking up a red card two minutes from time, are fifth on 33 points after being leapfrogged into fourth by Lille, 2-1 winners at RC Strasbourg.

Nine-man AS Monaco lost 3-1 at Nimes after taking the lead before Tiemoue Bakayoko and Gelson Martins were sent off in the first half, the latter for pushing referee Mikael Lesage.

At the Parc des Princes, Sarabia put PSG ahead against Montpellier after eight minutes when he curled a fine shot into the top corner.

Nine minutes later the visitors’ Bertaud was shown a red card for handball outside his box.

Di Maria doubled the advantage four minutes before the break with a fine chip after being set up by Sarabia and Congre turned a corner into his own net three minutes later.

Mbappe netted his 36th goal at the Parc des Princes in 34 matches in the 57th minute with a cool finish after being played through by Neymar.

Fullback Kurzawa rubbed salt in Montpellier’s wounds in the 65th with a powerful volley from inside the area.

With the three points in the bag, coach Thomas Tuchel replaced Mbappe with Mauro Icardi and the France striker did little to hide his frustration.

Tuchel reminded Mbappe who the boss was, just like he did two months ago when the forward also showed discontent after being substituted.

“I’m the coach, someone needs to decide,” Tuchel told a news conference.

“It’s going to stay like this. On sporting matters I’ll always be the one who decides. We’re not playing tennis but football. You need to have respect for everyone.”

Substitute Edinson Cavani thought he had netted his 199th PSG goal in a rare appearance this season, but it was ruled out for offside.