Bayern to go to CAS after Ribery ban confirmed 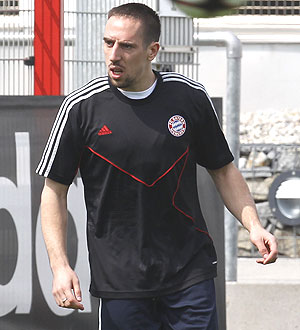 Bayern Munich will appeal to the Court of Arbitration for Sport (CAS) after UEFA upheld a three-match ban that will keep Franck Ribery out of the Champions League final, the German club said on Wednesday.

Appealing to CAS in such circumstances is highly unusual but Bayern described the ruling as harsh and said Ribery was disappointed and sad to be missing the final against Inter Milan.

The French playmaker, who has already served one match of the ban, was dismissed before halftime in the first leg of the semi-final against Olympique Lyon for a studs-up challenge on Lisandro Lopez.

"We will keep on fighting," Bayern chairman Karl-Heinz Rummenigge told reporters. "We're not happy with the decision here and we will take the decision to CAS in Lausanne.

"For him to miss the Champions League final for an offence of foul play is just too harsh," he added.

"Foul play should be punished with a one-match ban, those are the UEFA statutes but they have not followed them," added Rummenigge. "It's much too harsh."

Bayern said in a statement last week that UEFA had found Ribery, who attended the meeting but did not comment, guilty of assault.

"Given the outcome of the proceedings, Bayern Munich and the player have the right to lodge an appeal at the Court of Arbitration for Sport," UEFA said.

A UEFA spokesman said appeals could be taken to CAS for bans lasting for two matches or more.

In practice, however, it is very unusual for matters concerning bans for incidents on the field to go to CAS, which usually deals with contractual and off-field disputes.

World soccer's governing body's statutes differ from UEFA's and only allow an appeal when a player is banned for four games or over, or a minimum three-month period.

Ribery and fellow international Sydney Govou were questioned in April as witnesses by police investigating a prostitution network.

French media have said the players were clients of a nightclub in the posh Champs-Elysees district of Paris, which allegedly featured escort girls.

Ribery's lawyer has said her client was only questioned about his ties with the leader of an escort girl network and the player has made no comment about the affair.

© Copyright 2021 Reuters Limited. All rights reserved. Republication or redistribution of Reuters content, including by framing or similar means, is expressly prohibited without the prior written consent of Reuters. Reuters shall not be liable for any errors or delays in the content, or for any actions taken in reliance thereon.
Related News: UEFA, Bayern, CAS, Franck Ribery, Karl-Heinz Rummenigge
COMMENT
Print this article
Robben helps Bayern enter German Cup final
Bayern extend lead despite draw with Leverkusen 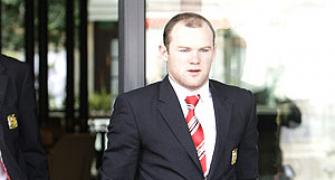