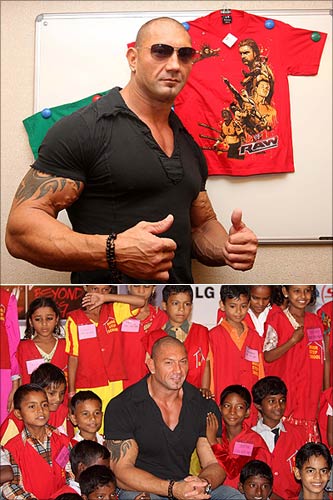 Brought to India by Ten Sports, the Dubai-based television channel that has the World Wrestling Entertainment telecast rights, the 6 feet 6 inches, 130 kg giant showed his soft side when he visited a non-profit organisation on Friday.

At one of his first engagements during his visit to Mumbai, Batista met children from Door-Step School, an NGO working towards providing sustainable education to underprivileged children.

Batista is a patron of education and truly wishes to support the WWE's efforts towards educating underprivileged children.

He spoke to the children on self development stressing education as the cornerstone of success. He discussed his own achievements and hurdles which he overcame, in order to encourage the children to put their best foot forward. The children were extremely involved in the interaction and spoke passionately about their dreams and ambitions.

"Today's interaction with the children from Door-Step School has been extremely fulfilling. I would like to thank them for giving me this opportunity to meet the kids. Everyone was so full of life and each one of them is gifted. It was a privilege to extend my support to such a cause and hopefully encourage the children to pursue their dreams", said Batista.

Batista clicked pictures and signed autographs with the children.