Badminton: World Tour to resume with Taipei Open in September IMAGE: The BWF announcement comes a day after India's singles players were allowed access to indoor courts with badminton in the list of 11 sports which have been permitted to resume training. Photograph: Jason O'Brien/Getty Images

The Olympic-qualifying India Open badminton tournament, which was postponed due to the COVID-19 pandemic, will now be held in New Delhi from December 8 to 13 after the BWF unveiled a revised calendar to salvage the disruption-hit season.

The World Tour Super 500 tournament, originally scheduled to be held in New Delhi from March 24-29, will now take place from December 8 to 13, the Badminton World Federation (BWF) said in a release.

The all-important event will be preceded by the Hyderabad Open (August 11 to 16) and the Syed Modi International (November 17 to 22).

The BWF announcement comes a day after India's singles players were allowed access to indoor courts with badminton in the list of 11 sports which have been permitted to resume training.

Tournaments in New Zealand, Indonesia, Malaysia, Thailand and India have been rescheduled, while the season resumes in August with two BWF Tour Super 100 events in Hyderabad (Aug. 11-16) and Lingshui (Aug. 25-30).

The season-ending World Tour Finals in Guangzhou, China has been pushed back by a week and will now finish on Dec. 20 while the Thomas and Uber Cup Finals in Aarhus was postponed to Oct. 3-11 last month.

"It is a condensed calendar but we are confident this provides the framework to allow us to start again when it is safe and logistically possible," BWF secretary general Thomas Lund said in a statement.

"At this point in time, it's difficult to predict when international movement and entry restrictions will be lifted by individual countries and territories.

"But we will not resume competition unless it is absolutely clear that is safe to do so."

The badminton season was suspended following the All England Open in March. The German Open, Swiss Open, European Championships and Australian Open -- all scheduled between March and June -- remain suspended.

© Copyright 2021 Reuters Limited. All rights reserved. Republication or redistribution of Reuters content, including by framing or similar means, is expressly prohibited without the prior written consent of Reuters. Reuters shall not be liable for any errors or delays in the content, or for any actions taken in reliance thereon.
Related News: Badminton World Federation, New Delhi, Syed Modi International, India, Jason O'Brien
SHARE THIS STORYCOMMENT
Print this article
COVID-19: BFI releases SOP for resumption 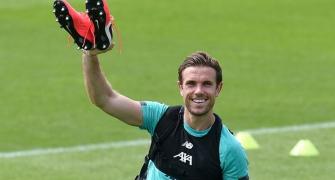