Penalty corner specialist Sandeep Singh pumped in four goals as India swamped Bangladesh 9-0 to notch up their second straight victory in Group B men's league of the Asian Games hockey competition at the Aoti field in Guangzhou, on Wednesday.

Two-time champions India, who opened their campaign to regain the gold they last won in 1998 and qualify for the 2012 Olympics with a facile 7-0 victory over Hong Kong, led 3-0 at half time before upping the pace in the second half and pumping in six more goals to complete the rout.

The Rajpal Singh-led team warmed up nicely for the much-awaited clash with arch-foes Pakistan on November 20.

The Indians took some time to find their bearing in the first half before scoring their 17th victory in 18 meetings against their South Asian rivals and the fifth in as many attempts in the Asiad. 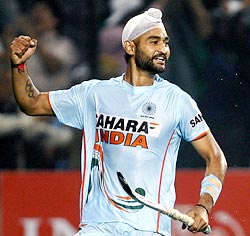 Tushar Khandekar, who combined very well up front with skipper Rajpal, Arjun Halappa and Shivendra Singh, opened the floodgates in the second minute and then found the mark again in the 39th minute.

Sandeep Singh, who was very effective in his penalty corner tries, scored the second goal in the 13th minute, and then fired home thrice more with hits off penalty corners in the 47th, 63rd and 66th minutes for India's seventh and eighth goals before Dharamvir Singh completed the tally a minute from the end.

Shivendra Singh scored the third goal which was a field try, in the 22nd minute, Rajpal Singh (37th, field goal) that put India 4-0 up two minutes into the second half and Khandekar who scored his second goal with a field effort in the 39th minute.

It was a totally one-sided encounter in which India virtually pitched their tent in the rival half and could have scored a few more goals but for some missed attempts, mainly by Bharat Chikara, in the first half.

Khandekar provided the perfect start for the eight-time Olympic champions very early by deflecting to the roof of the goal a through pass from Arjun Halappa. It was also India's 100th goal against Bangladesh.

Shivendra made it 3-0 ten minutes later with another field effort but Chikara flunked in front of the goal on four other occasions to deny India another goal before half time.

India set up a fast pace from the start of the second half and it was no surprise when they quickly jumped to a 5-0 lead with two goals coming in three minutes.

A quick move down the middle resulted in Rajpal sounding the board with an angular shot before Khandekar made a quick one-two with his captain before slotting in another angular effort.

Sandeep Singh buried any hopes of a fight-back by firing home his first directly taken penalty corner try in the 47th minute before adding two more to his tally in a three-minute spell towards the close.

The final nail on the Bangladesh coffin was hammered home by Dharamvir after the ball was snatched from near the 25 yards circle by the Indians, in the 69th minute.

"I am satisfied with the performance. We came with the intention of scoring six goals at least and got more. We missed a few chances," he said.

He, however, was cautious about the penalty corner conversions by Sandeep Singh and said the variations were kept purposely out of public view.

"This team and this goalkeeper would not have troubled us. We did not use many variations deliberately," he said.

But Brasa also slammed the pitch, for having extra bounce than normal and the FIH (International Hockey Federation) saying nylon pitches, as are being used here, should never be used for international matches and the pitches should be given at least a one-year period to settle down.

On the forthcoming match against Pakistan, Brasa said the team will study the game which will be played by their arch-rivals before deciding on the strategy.

"We will study how they are playing. We have a few days to do so and then decide what to do," he said.

Rajpal Singh did not feel India will start off with an advantage against Pakistan following the 7-3 drubbing that his team gave them in the Commonwealth Games in Delhi.