News
Business
Movies
Sports
Cricket
Get Ahead
Money Tips
Shopping
Sign in  |  Create a Rediffmail account
Rediff.com  » Sports » All actors promoting IPL, so I am all for WSH: Suniel Shetty

All actors promoting IPL, so I am all for WSH: Suniel Shetty

Bollywood, on Wednesday, became part of the World Series Hockey (WSH) as the Bangalore franchise, moments after being acquired by Zentrum Group, appointed cine star Suniel Shetty as the team's mentor.

The franchise has been named as 'Karnataka Lions'.

The action hero straightway exuded confidence, that the multi city-based league would see the light of the day despite the long-standing dispute between Hockey India and Indian Hockey Federation.

"Everything is being taken care of as the WSH management is looking into the issue and the organisers are in constant touch with the authorities concerned. I hope that this issue will be a minor one and we overcome all the glitches. I hope for the success of the tournament," Shetty said. 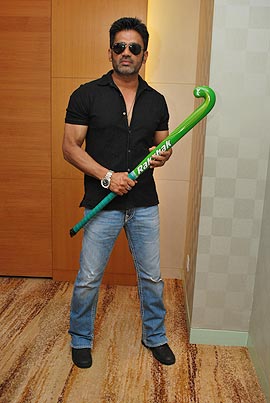 "All are looking forward to playing in this tournament. The management is doing its bit and we are hoping for positive results. Everyone is tirelessly working on resolving the issue. We hope that this stand-off comes to an end soon," added Shetty.

WSH is a lucrative league jointly organised by the IHF and Nimbus Sports. IHF is not affiliated to the International Hockey Federation (FIH) and the world body recognises Hockey India as the national federation for the sport in India.

FIH had also threatened to bar players from national selection if they take part in WSH.

The team has been acquired by Sporting Ace, a part of the Zentrum Group, which is a global player in the field of energy, chemicals, education, sports, information technology, consulting, media and outsourcing.

Shetty, who has been actively associated with organizing several sporting and celebrity events in India, said the sport needs better infrastructure and its due share of promotion.

"Hockey needs infrastructure in the country, players need better salary and exposure, and this is what I believe WSH will do, promising an alternate career to kids who do not make it to the national team necessarily," the 50-year-old said.

The actor said his role as a mentor will be to spread the awareness of the game and promote the cash-rich event.

"This association is a dream come true for me. Being part of hockey, which is your national game, it's a real honour. According to me if you are supporting hockey you are also supporting other sports and hoping that they also reach the same platform, at least close to what cricket is today.

"As a mentor, I will be building the team, building the infrastructure in Karnataka itself to develop the sport. It's a great opportunity for the youngsters to show their talent and skill," he added.

Asked about the future of the series as the Premier Hockey League (PHL), launched a couple of years ago, died a premature death, Shetty said, "From PHL, there's a lot that we have learnt. We have to make sure that we don't repeat the mistakes committed by the PHL organiers."

Shetty said it's the right time to organise the league despite the fast-approaching Olympic qualifiers.

"The more they play the better they will be. I believe the tournament is happening and because it's happening we are supporting it. I think it will help the Indian players in their preparation for the Olympic qualifiers."

Asked about what prompted him to join the WSH, Shetty said, "Because everybody is part of the IPL, all actors are promoting cricket so I decided to promote hockey."

Players are being allocated to the teams based on the internationally accepted and practiced 'draft' system.

Source: PTI© Copyright 2020 PTI. All rights reserved. Republication or redistribution of PTI content, including by framing or similar means, is expressly prohibited without the prior written consent.
Related News: WSH, PHL, Shetty, FIH, IPL
SHARE THIS STORYCOMMENT
Print this article

Maken hopes to introduce Bill in winter session of Parliament