Why Sharad Pawar Is Against The Bhima Koregaon 16's Arrests

Despite Sharad Pawar's assertion, the Maharashtra government has done nothing to ease the suffering of the Bhima Koregaon 16, who have been denied their basic rights to health and to communication with their families while in jail.
Jyoti Punwani reports. 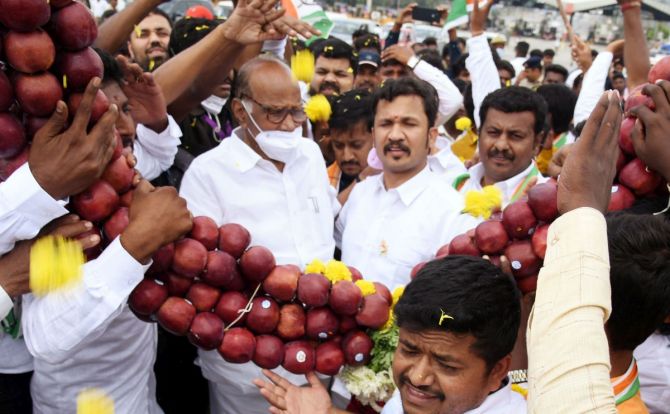 With these answers, given during cross-examination before the Bhima Koregaon Commission of Inquiry on Thursday, May 5, 2022, Sharad Pawar, head of the Nationalist Congress Party and the power behind the Maha Vikas Aghadi coalition government in Maharashtra, gave as much of a clean chit as possible to the 16 intellectuals arrested for their alleged involvement with the Elgar Parishad and for allegedly making inflammatory speeches there.

The speeches at the Parishad were the cause of the violence at Bhima Koregaon on January 1, 2018, according to the prosecution.

Pawar has been more forthright in the past, calling the arrests of the 16 a 'misuse of power' by the Pune police who were initially handling the case, till the National Investigation Agency took over in 2020.

In fact, the NIA took over only after Pawar announced that an Special Investigation Team would be set up to reinvestigate the case. The MVA coalition was then just over a month old.

Despite his categorical stand then, the Maharashtra government has done nothing to ease the suffering of the Bhima Koregaon 16, who have been denied their basic rights to health and to communication with their families while in jail, leading to the death last year of the oldest among them, 84-year-old Jesuit priest Stan Swamy.

In opposing their bail applications, the counsel for the Maharashtra government has taken the same tough stand as has the NIA counsel.

To add insult to injury, Maharashtra's home minister is from Pawar's NCP.

The police version holds these intellectuals responsible for a Maoist conspiracy to overthrow the government, a conspiracy that led to the Bhima Koregaon violence on January 1, 2018, when lakhs of Dalits were on their way to pay homage at the site of the historic Bhima Koregaon battle. Mahar soldiers had helped the British defeat the Peshwas in that battle, and January 1, 2018, marked its 200th anniversary.

However, the very first FIR filed after the violence held two Hindutva leaders: Sambhaji Bhide and Milind Ekbote responsible for instigating violence against the Dalits. Substantiating this charge, eye-witnesses have testified before the Commission that the violence began when saffron-flag carrying mobs threw stones at Dalits making their way to Bhima Koregaon.

Later in the day, the violence degenerated into a riot, in which one Maratha was killed.

Ekbote was arrested and released on bail within a month; Bhide was given a clean chit by then chief minister Devendra Fadnavis in the state assembly -- an act that Pawar felt was wrong.

Asked by advocate for the Dalits B G Bansode on Thursday whether a chief minister could give a clean chit to a suspect before his case was investigated and chargesheet filed, Pawar replied 'No.'

Bhide has in fact been discharged from the case.

Villagers have also deposed how, on December 29, 2017, a dispute between Dalits and Marathas in Vadu Budruk village created tension, resulting in a bandh being called by Maratha followers of Bhide and Ekbote on January 1, 2018.

The police did nothing to prevent the bandh, despite knowing that lakhs of people were to gather there for the 200th anniversary of the Bhima Koregaon battle.

But, apart from stating that 'Right wing persons were trying to create a tense atmosphere in Vadu Budruk', Pawar did not say anything pertaining to this aspect. He claimed he did not know Bhide and Ekbote personally.

In response to a question by advocate Kiran Channe, representing Dalit victims, the NCP leader defined right wing as 'persons who, taking advantage of the fault lines (relating to caste and religion) in society, spread hatred among different sections.'

Evidence before the Commission showed that Ekbote had created a trust in the name of Sambhaji Maharaj and was involved in looking after his samadhi in Vadu Budruk, and observing his death anniversary.

While the popular view is that the last rites of Sambhaji Maharaj, who was killed on Aurangzeb's orders, were performed by a Mahar family, Ekbote has been propagating the view that it was a Maratha family that performed the last rites.

This disputed history was one of the reasons for the clash at village Vadu Budruk on December 29, 2017.

Refusing to comment on this disputed history, Pawar expressed his disapproval of Ekbote's involvement in Sambhaji Maharaj's samadhi.

Replying to a question by advocate Rahul Makhare, representing Dalit victims, Pawar stated: 'Once the Maharashtra government's Department of Archaeology had declared the Samadhi Sthal a monument, then no person or organisation could claim any right over it', adding that its management should be assigned to an authority appointed by the state government.

Strangely, this has not been done even though Pawar is part of the state government for over two years, and even though Ekbote is still accused of instigating the violence.

Among the charges faced by the Bhima Koregaon 16 is sedition. Pawar stated that he would raise the issue of misuse of the sedition law (Indian Penal Code Section 124 A) in the Rajya Sabha, and ask that it either be amended or repealed.

When it was pointed out to him by Niteen Pradhan, advocate for Milind Ekbote, that since the IPC fell under the Concurrent list, state governments could also repeal or amend IPC Sec 124 A. he merely repeated that as a Rajya Sabha member, he would raise the issue there.

Among the veteran leader's suggestions on how riots could be prevented was the designation of a special area for protests so that the public was not inconvenienced and public property not destroyed if the protest turned violent. A government representative should meet the protesters to accept their representation and address their grievances, he said.

It may be recalled that the 1994 Gowari stampede took place precisely because no one from the government came to meet the 50,000 Gowari tribals gathered to protest in Nagpur. The police had banned all protests outside the state assembly, so they were kept a distance away. After waiting for hours, the tribals saw a car with a red light approaching them and rushed towards it, only to be beaten back by the police.

114 tribals died in the stampede. Sharad Pawar was then Maharashtra's chief minister. He was exonerated by the Justice S S Dani Commission of Inquiry which concluded that the CM was neither aware of the protest nor the protesters's demands.