News
Business
Movies
Sports
Cricket
Get Ahead
Money Tips
Shopping
Sign in  |  Create a Rediffmail account
Rediff.com  » News » 'When the tri-colour is painted on my body, I feel I can even die for my country'

Today: Sudhir Kumar Chaudhary, a one-of-a-kind cricket fan, who worships Sachin Tendulkar and follows the Indian team wherever it goes. All set for the India-Sri Lanka series this month, he is ready with three liters of saffron, white, green and blue! "I have already bought three liters of saffron, white, green and blue colour paint boxes. These are in preparation for the upcoming cricket matches I plan to watch.

As cricketers buy new bats, gloves or batting pads, these paint boxes are the gear I will utilise at the stadium. When the chips are down on the field, or it's celebration time, I am ready with our tri-colour painted on my body.

A Test match is like a test for me too. Because of the early start (9 am) I have to start painting my body the previous night.

I need to apply two coats of paint, so it needs enough time to dry. In the morning, the last thing I paint is my face. I write India and Tendulkar.

It generally takes me four hours to paint my body and face for One-Day Internationals. The T20s are easier. I start painting in the morning and by evening I am all set for the game.

I generally apply the paint myself, but need help to paint my back. Friends are always willing to help. The NRIs and Punjabis in Australia and New Zealand were more than willing to help me during the 2015 World Cup.

Today I am a recognised face and an icon of Muzaffarpur, Bihar, though I rose to fame as a fan of Sachin (Tendulkar). He is my God.

It all started in 2002 after I cycled 1,200 kilometres all the way to Bangladesh to meet my idol. I was always a cricket fanatic. Like many Indians, I would switch off my television set when Sachin would get out.

My friends would tease me about this. They once challenged me to meet Sachin. They chided me but I took it one step ahead and made it happen.

Soon my photograph was in all the newspapers and though Sachin didn't play that match due to injury I went ahead to watch it. How could I not? After all, my photographs were in all the papers! 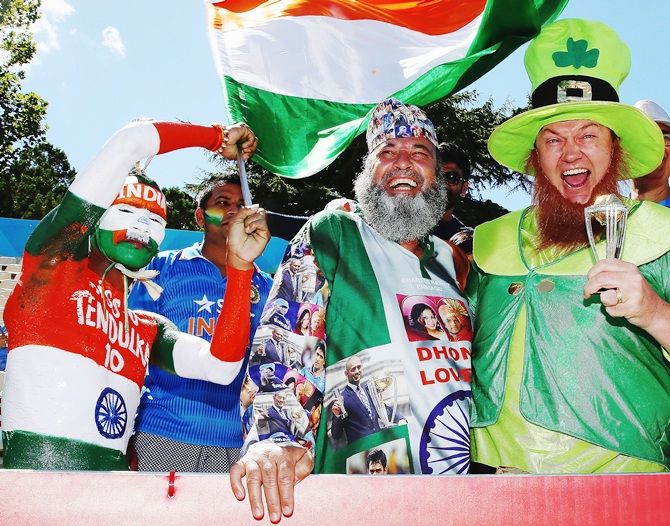 I went to Mumbai to meet Sachin during the India-Australia-New Zealand tri-series in 2003. I was at the Wankhede standing with my cycle, but no one paid attention to me. Later, a journalist was kind enough to tell me that Sachin would be at the Trident hotel.

I went there with my cycle. The guards would not allow me to go close to him. I pushed them and managed to get the attention of my God. I immediately touched his feet and then his wife's.

Then Sachin invited me to his home. I could not wait for the next morning. It looked like an eternity. I reached his home and parked my cycle next to the gate. His guards didn't let me go inside. I waited there from morning until evening.

The neighbours saw me and offered me water and food. The guards also started getting worried as I didn't budge. They finally called up Sachin and told him about me and my cycle. He remembered and asked me to come inside.

I had dreamt of only meeting Sachin once in my life, but here I was sitting in my idol's house and he was offering me food. I could hardy eat as I was so nervous and excited at the same time.

He gave me tickets for the next game.

He asked me, "Sudhir, do you want to watch more matches?" I told him I had to appear for my graduation examination. So he said, "Exams are more important, go ahead and appear for your exams."

But then I thought, when would I get an opportunity like this again. It was like God knocking on my door and offering me tickets for the rest of the series. It was a once-in-a-lifetime opportunity. I grabbed it with both my hands. I will always rate that moment as my biggest achievement.

That day Sudhir, the Sachin fan was born!

I would have thanked my stars if I would have got his autograph and a photograph clicked with him, but my fortune changed and today I am known as his most famous fan.

I left my cycle at Sachin Sir's doorstep and went by train to Cuttack (November 6, 2003) to watch the other match. I first went to the stadium to watch the practice session. I spotted Sachin and ran up to him to touch his feet.

The guards tried to stop me, but I heard Sachin Sir telling the guards let me come.

The team travelled to Bangalore (November 12, 2003) and then for the next game in Hyderabad (November 15, 2003). I was just in time to watch the master blaster hit a century.

Painted in orange, white and green, with the India flag in hand, I managed to breach the security and reach the pitch to touch Sachin Sir's feet. As soon as I touched his feet, the guards were all over me, beating me. Once again Sachin Sir came to my rescue and told the guards to move away.

The team reached Kolkata for the Eden Gardens match (November 18, 2003) but I could not follow them. I was badly hurt and I had to take my cycle back with me which I had left at Sachin Sir's gate in Mumbai.

I came to Mumbai by train and once again met him at his home and took my cycle with me.

I don't understand anything other than cricket, but when I paint my body with the tri-colour, I feel patriotic. When I carry the national flag, I feel responsible. I get the feeling that I am all-powerful and I can even die for my nation.

I feel proud to flaunt our national flag. The feeling of being an Indian and being associated with the national flag was so much that I stopped going for IPL matches.

It has been two years since I watched an IPL match. I feel the teams play for their franchisees, it is more industrial in nature. The other reason I stopped watching the IPL was that my idol also retired.

I have my family, but today my life is dedicated to cricket. My parents tell me to find a full-time job and get married, but I don't listen to them. If I am committed to cricket, how can I find time for marriage and my family? IMAGE: Sudhir has seen 43 Test matches, 256 One-day Internationals and 32 T20s. For the 2015 World Cup, he was sponsored by the FM channel Fever 104. Photograph: Hannah Peters/Getty Images

I will always honour him. Every match, I write 'Miss U Tendulkar 10' on my body. No one can replace him.

In 2004 when I went to Sachin Sir's place I took Muzaffarpur's famous litchi for him. It is a tradition that in the month of May I deliver litchis to his place.

After Sachin Sir, Harbhajan Sir always asks about my well-being. I also give litchis to Harbhajan Sir and (Mahendra Singh) Dhoni Sir. These cricketers are very kind to me.

I have been doing odd jobs to support myself. I sometimes set up food stalls or work as an artist to fund my passion for cricket. It is not enough, I know. But I have been lucky to find help. When I go to any city, other cricket fans invite me to their homes and also give me food.

Even in Bangladesh, Sri Lanka and Pakistan, cricket fans, and sometimes players, are so helpful that they ask me to stay with them.

The only time I stayed in hotels was during the 2015 World Cup. I cannot stop thanking the God of Cricket for helping me. It was his letter to the Australian embassy that worked like a magic wand.

Fever 104 (the FM radio station) sponsored my trip, but Sachin Sir's letter helped me at all the airports. 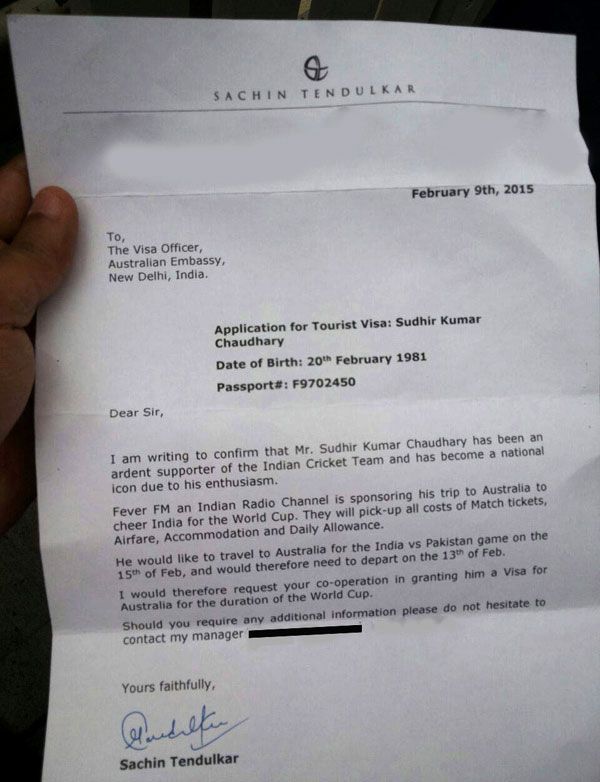 At Auckland airport, I was about to be fined $1,400 for carrying eight boxes of paint, but after a lot of pleading and with Sachin Sir's letter of recommendation, they let me go with just a warning.

It gives me enough reasons to keep doing this to my last breath.

When Laxmi Negi/Rediff.com spoke to Sudhir Kumar Chaudhury. He was in New Delhi and trying to book the cheapest tickets to Colombo for the India-Sri Lanka Test series.

He lives in Muzaffarpur, Bihar, and says he has dedicated his life to cricket. 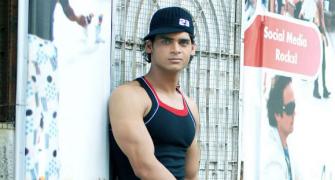 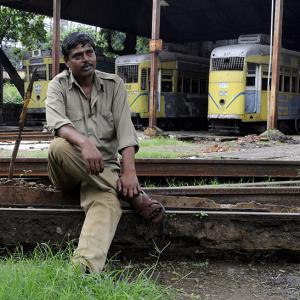