News
Business
Movies
Sports
Cricket
Get Ahead
Money Tips
Shopping
Sign in  |  Create a Rediffmail account
Rediff.com  » News » Shashi Tharoor: The Sangh does not speak for Hindus like me

Will India become a 'Hindu Pakistan'?
That is what Shashi Tharoor, the Congress MP from Thiruvananthapuram, believes will happen if the BJP wins the next general election.
Even as he was cautioned by his party and urged to maintain 'restraint', Dr Tharoor took to Facebook to clarify his remarks which he said had been 'bizarrely misconstrued'.
'I have said this before and I will say it again. Pakistan was created as a State with a dominant religion, that discriminates against its minorities and denies them equal rights.'
'India never accepted the logic that had partitioned the country.'
'But the BJP/RSS idea of a Hindu Rashtra is the mirror image of Pakistan -- a State with a dominant majority religion that seeks to put its minorities in a subordinate place.'
'That would be a Hindu Pakistan, and it is not what our freedom movement fought for, nor the idea of India enshrined in our Constitution.'
'Many proud Hindus like myself cherish the inclusive nature of our faith and have no desire to live, as our Pakistani neighbours are forced to, in an intolerant theocratic State.'
'We want to preserve India and not turn our beloved country into a Hindu version of Pakistan.'
This is something Dr Tharoor stated in his book, Why I Am A Hindu.
Presenting an exclusive excerpt: 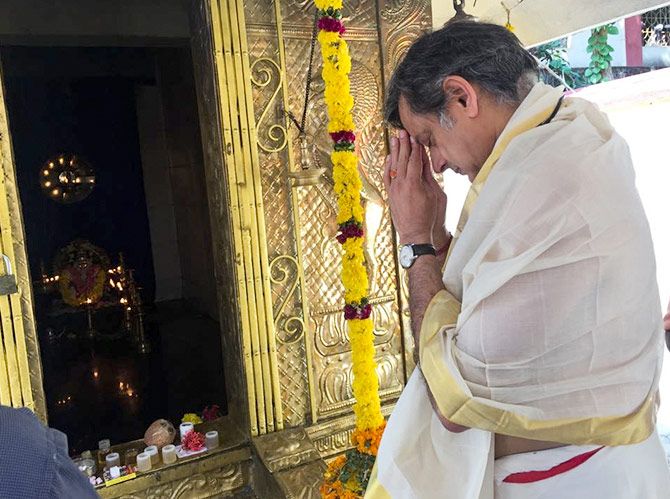 While not everything in the philosophy I have sought to summarise is objectionable -- and there is much to admire, for instance, in (Deen Dayal) Upadhyaya's humanistic thinking -- there is much that is troubling too.

By rejecting the territorial idea of the nation in favour of an abstract ethos of patriotism, it excludes many who belong on the territory of modern India and are loyal citizens but feel differently about Bharat Mata.

In its emphasis on cultural authenticity and allegiance to ancient Indian traditions and beliefs, it risks alienating those who do not share these assumptions.

While extolling the virtues of harmony and cooperation, it sows the seeds of further division by setting those who subscribe to these values against those who -- for reasons of religion, politics or intellectual conviction -- do not.

And in dismissing minority appeasement but requiring minorities to accept Hindu ways of being as their own, it offers no real solution to the undeniable reality that 20 per cent of India's population are not Hindus and cannot be expected to conform to Hindu ideas of how they should live and what they should believe.

It also ignores, in its desire to portray a Hindu vision, the diversity within Hinduism itself.

The faith is practised differently by people in different parts of the country, or worshipping different manifestations of the Divine, or adhering to different castes or sects.

Even the Brahmins, who are spread throughout the country and are associated everywhere with learning, priestly functions and religious erudition, manifest diversity in their social practices: While the Malayali Brahmins grow their tuft of hair at the front, most orthodox Tamil Brahmins wear it at the back; where Iyengar Brahmin women regard white as the colour of widowhood, the Namboodhiri Brahmin bride wears white at her wedding.

As we have seen, Hinduism is not a totalising faith. Each Hindu may have a different conception of her own dharma.

Integral Humanism undoubtedly emerges from a close and sustainable reading of Advaita philosophy, but Upadhyaya's is not the only way of being Hindu, and other sages and rishis may offer alternative approaches to the same conundrums. 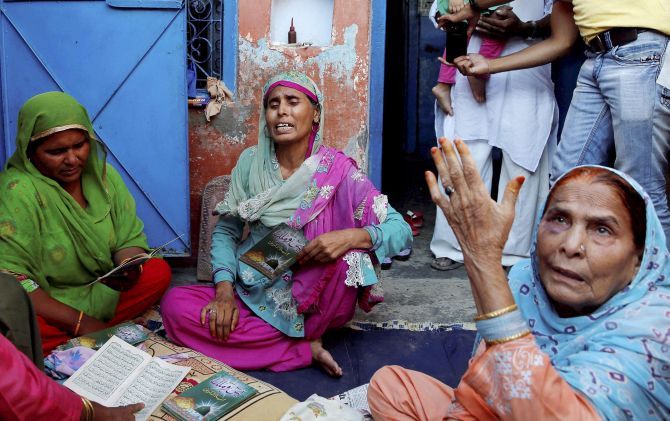 IMAGE: In September 2015, Mohammad Akhlaq was brutally lynched by a mob, at his home in Bisara village, Dadri, Uttar Pradesh, on the suspicion of storing and eating beef. His stunned family, in the immediate aftermath of his untimely death.Photograph: PTI Photo

Upadhyaya's philosophy suffers the demerit of its own certitudes; it is unable to accommodate dissent.

Some have seen in Upadhyaya's approach a reaction to Islam's assertiveness.

What does this 'Islamicised Hinduism' of the 'Sangh Parivar' consist of?

The ideological foundations laid by (Vinayak Damodar) Savarkar, (Madhav Sadashiv) Golwalkar and Upadhyaya have given members of the RSS a fairly coherent doctrine. It rests on the atavistic belief that India has been the land of the Hindus since ancient times and that their identity and its identity are intertwined.

The history of India is the story of the struggle of the Hindus, the owners and custodians of this ancient land, to protect and preserve their religion and culture against the onslaught of hostile alien invaders.

It is true that the territory of India also hosts non-Hindus, but these are invaders (Muslims, Christians) or guests (Jews, Parsis); they can be tolerated, depending on their loyalty to the land, but cannot be treated as equal to the Hindus unless they acknowledge the superiority of Hindus in India and adopt Hindu traditions and culture. Non-Hindus must acknowledge their Hindu parentage, or, better still, convert to Hinduism in a return to their true cultural roots. 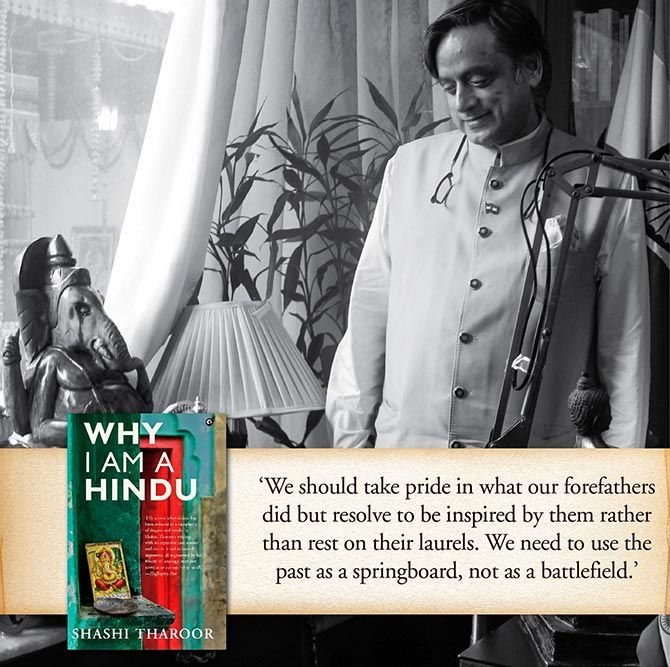 Those political forces in India who are opposed to the Sangh ideology are mistaken, the doctrine goes on, since they make the cardinal error of confusing 'national unity' with the unity of all those who happen to be living in the territory of India, irrespective of religion or national origin.

Such people are in fact anti-national, because their real motivation is the selfish desire to win minority votes in elections rather than care for the interests of the majority of the nation.

The unity and consolidation of the Hindus is therefore essential.

Since the Hindu people are surrounded by enemies, a polarisation must take place that pits Hindus against all others.

To achieve this, though, Hindus must be unified; the lack of unity is the root cause of all the evils besetting the Hindus.

The Sangh Parivar's principal mission is to bring about that unity and lead it to the greater glory of the Hindu nation.

The problem with this doctrine, coherent and clear though it is, is its denial of the reality of what Hinduism is all about.

What Swami Vivekananda would have seen as the strength of Hinduism -- its extraordinary eclecticism and diversity, its acceptance of a wide range of beliefs and practices, its refusal to confine itself to the dogmas of a single holy book, its fluidity, the impossibility to define it down to a homogenous 'Semitic' creed -- is precisely what the RSS ideologues see as its weakness.

The Sanghivadi quest for polarisation and unity is also a yearning to make Hinduism what it is not -- to 'Semitise' it so that it looks like the faiths of the 'invaders': Codified and doctrinaire, with an identifiable God (preferably Rama), a principal holy book (the Gita), a manageable ecclesiastic hierarchy, and, of course, a unified race and a people to profess it.

This is not the lived Hinduism of the vast majority of Hindus.

And so the obvious question arises: Must every believing Hindu automatically be assumed to subscribe to the Hindutva project?

And since manifestly most do not, does the viability of the project require a continued drive to force the dissenters into the Hindutva straitjacket? 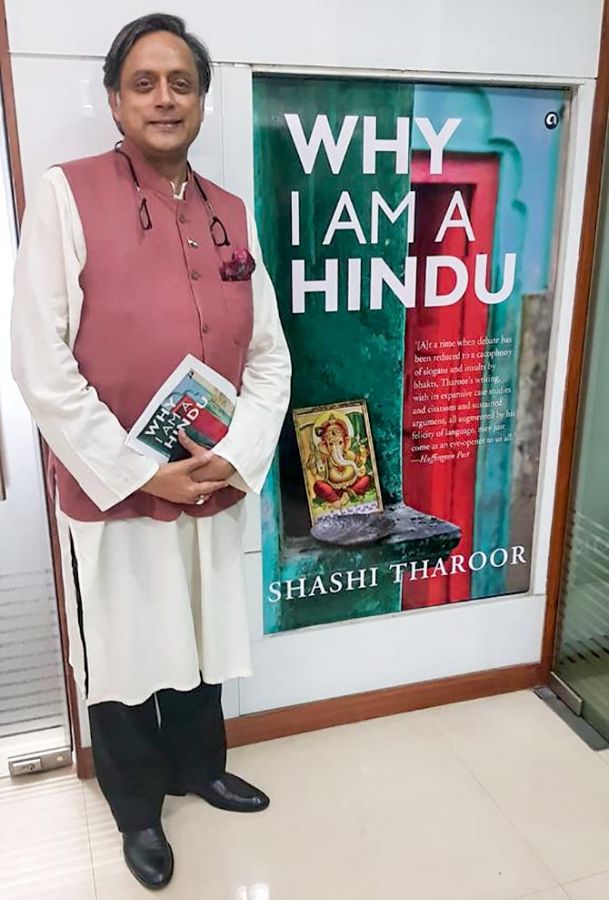 Whereas Hinduism is an inward-directed faith, focusing on Self-Realisation above all and the union of the soul with the Absolute, Hindutva is an outward-directed concept, aimed at creating social and cultural distinctions for a political purpose.

Hindutva, therefore, is disconnected from the central assumptions and tenets of my Hinduism. Yet it piggy-backs on the faith, claiming to represent Hinduism, though it does so not as a set of doctrines or precepts but as a cultural marker.

Hindutva adopts the Hindu religion not as way of seeking the Divine, but as a badge of worldly political identity.

This has little to do with the Hinduism of Vivekananda, or of Adi Shankara; it is a 20 century idea, born of 20 century forms of political thinking that were already beginning to be dangerously out of date elsewhere in the world when they were propounded in India.

Parties professing to speak for an entire people or 'volk' were discredited as well as destroyed in Europe in 1945; seven decades later, the idea flourishes in India, in the name of Hindutva. 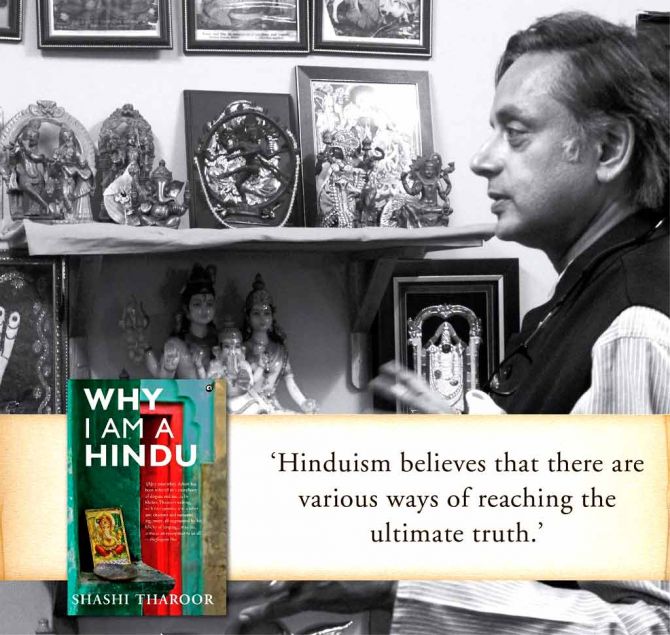 Speaking for myself, any attempt to reduce my Hinduism -- which sits comfortably with the Nehruvian notion of Indianness -- to a sectarian notion of Hindutva is a travesty of what Hinduism really is.

I too, as a Hindu, can say, when people tell me 'Garv se kaho ki tum Hindu ho', that I am proud to be a Hindu, but in what is it that we are to take pride?

I take pride in the openness, the diversity, the range, the lofty metaphysical aspirations of the Vedanta; of the various ways in which Hinduism is practised, eclectically, and of its extraordinary acceptance of differences.

Unfortunately, as I have noted, the votaries of Hindutva seem to take pride in Hinduism the way in which one might support a football team as a badge of identity, rather than as a set of values, principles and beliefs, and so Hinduism becomes reduced in their retelling to little more than a label on a T-shirt, a badge of allegiance rather than a way of relating to the cosmos.

My notion of Indianness and Hinduness is very much caught up in what (the late President) Dr (Sarvepalli) Radhakrishnan so memorably spoke of as a view of life.

That view of life has very little room for intolerance, for dogma, for attacks on others because of what they do or do not believe.

I am a Hindu, and I am a nationalist, but I am not a Hindu nationalist.

My nationalism is unquestioningly, all-embracingly, Indian.

The Sangh does not speak for Hindus like me.

Excerpted from Why I Am A Hindu by Shashi Tharoor with the kind permission of the publishers, Aleph Book Company.