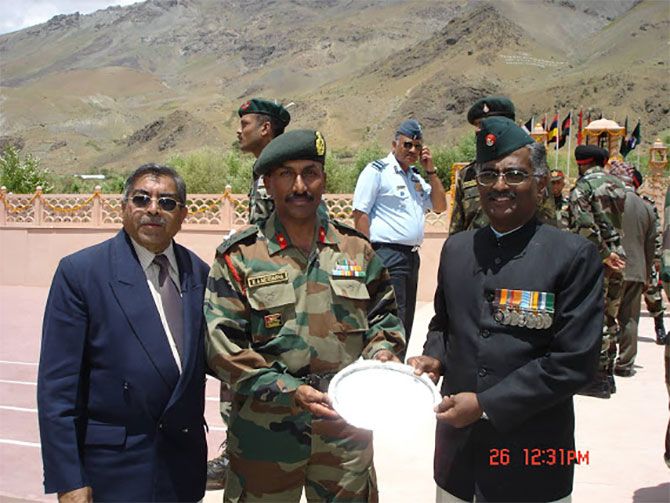 Two of the nicest, upright, brave leaders of men passed away on the same day.

They had probably never met, but both E N Rammohan, IPS, and Colonel M B Ravindranath, Vir Chakra, had left lasting impression on me when our paths crossed in different circumstances over the years.

Nineteen years ago in the summer of 1999, when I was chosen (by the maverick Vinod Mehta) to go and report from the Kargil-Drass-Batalik sector for Outlook magazine, I had no clue where I was headed.

But during the 45 days I spent on the ground in the battle theatre, many lasting friendships were forged both with officers and the units that they led or were part of.

Colonel M B Ravindranath (then Lieutenant Colonel Ravindranath), CO of 2 Rajputana Rifles (Raj Rif) was one of those several people one came across in that difficult period and have remained a permanent part of memory of the days and weeks gone by.

One of the kindest persons I have known, Colonel Ravindranath faced initial setbacks that his unit suffered in trying to evict intruding Pakistanis, with admirable calm and courage of conviction.

Despite losing precious manpower at the beginning of the campaign, he rallied the troops and kept inspiring them to go the extra mile.

And Colonel Ravindranath's troops -- who clearly were devoted to him -- responded magnificently.

The unit won back Tololing after a fierce and bloody battle spread over two days and nights on June 13, 1999.

The recapture of Tololing is considered a turning point in the Kargil conflict.

The tide actually turned from that point on in India's favour and we have to thank Colonel Ravindranath for it. He was awarded the Vir Chakra.

Those of us who heard stories from the safety of the battalion headquarters at the base of the peaks that the troops captured one after the other were awestruck.

I spent many days and some nights with 2 Raj Rif. Occasionally Colonel Ravindranath would find time to chat up or reveal some new development. He did not give breaking news each time.

But on every single occasion I stopped by at 2 Raj Rif, his instructions ensured impeccable hospitality. So I had many meals consisting simply of puri-subzi and/or aachar.

After the conflict I went back to Guwahati and it was not until 2009 (the 10th anniversary of the conflict) that I ran into Colonel Ravindranath again at Kargil. He had left the army soon after 1999. 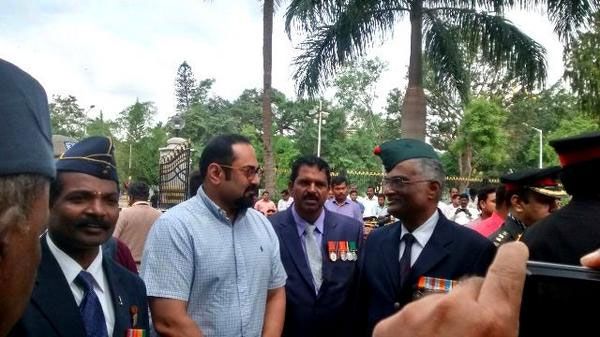 In the intervening 10 years, he had turned entrepreneur and would deliver inspiring talks on leadership for young children in his spare time.

During the 10th anniversary celebrations, we spent some time recalling many small incidents in the summer of 1999 both of us had forgotten.

Our lives never converged again, but I used to occasionally hear from his course mates about Colonel Ravindranath's progress in his second career.

Fifty-eight is too young to leave this world, but death doesn't look at age I guess. It comes when it is ordained. IMAGE: His handlebar moustache, of course, added weight to Mr Rammohan's considerable reputation as a blunt, upright and straight-talking cop.

And so it was with Mr E N Rammohan. He went when the time came.

Although 77, Mr Rammohan (yes, it was always Mr Rammohan, older as he was by two decades), always looked in good health.

His handlebar moustache, of course, added weight to his considerable reputation as a blunt, upright and straight-talking cop.

I first met him as a young reporter in Assam in the turmoil-ridden days of the ULFA insurgency in the state in the early 1990s.

He was IG, Operations and the man who coordinated with the Centre, the army and the civil administration.

Although entrusted with controlling the spreading insurgency in Assam, he never hated the insurgents.

He knew that the boys had taken up guns to get real and perceived grievances of the Assamese solved. So he didn't treat them as enemies.

For an inexperienced reporter like me (I had spent less than a decade in the profession then), this was an important distinction to make.

Although a Assam-Meghalaya cadre IPS officer, Mr Rammohan left Assam for central deputation in the mid-1990s and went on to become one of the most effective director generals of the Border Security Force between 1997 and 2000.

But it was not until 2006 when I relocated to Delhi that I renewed my acquaintance with him. He was a great source to get perspectives on various security issues, ranging from the growing Maoist menace to Kashmir and, of course, great insights into insurgencies in the north east.

Whenever I needed advice, I would call him and he would simply say, "Come to the IIC (India International Centre) library. I will be there. We will have a coffee and chat."

So I would land up there on time (he hated sloppiness and unpunctuality), get my doubts clarified and then stand in front of the camera and pretend to sound knowledgeable based on his input!

After the biggest massacre of CRPF jawans in Dantewada in April 2010, Mr Rammohan was appointed as the one-man enquiry panel.

As was his wont, he went deep into causes of the conflict in red zone, not limiting himself to the episode alone.

I and another colleague, then tracking Maoist movement and intending to write a book on it, kept pestering him for the contents of his report, but to no avail!

Then one day, out of the blue, he called and said come and see me at IIC. This was unusual. Normally, I would call him and not the other way.

As we met, he quietly handed over an envelope and said "Open it at home." Excited, I rushed home to find a copy of the Dantewada massacre enquiry report!!

Mr Rammohan was disappointed with the government of the day for not heeding his advice about restoring the rights of tribals under the 5th Schedule of the Constitution.

As long as the tribals are exploited by the rich and the powerful, the Maoists will continue to get traction, he used to say. 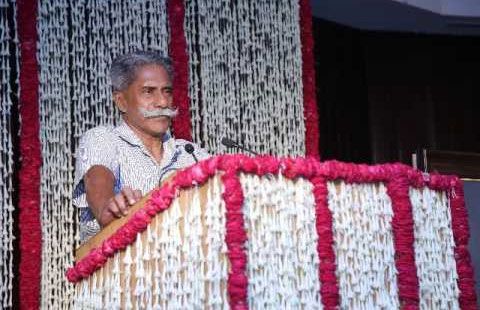 Till the end, he remained true to his belief and principles.

Despite his imposing demeanour, Mr Rammohan was a compassionate man.

Rushing to catch an early morning flight to Srinagar, I saw him in just ahead of me in the security check queue (that was another of his traits: He never pulled rank. If he wanted he could have got VIP treatment at airports, but Mr Rammohan never believed in such frills).

We chatted. I asked where was he headed. He just said Jammu and asked me why I was going to Srinagar.

Soon we went our separate ways. To my utter shock that evening I learnt that one of the two Army Aviation pilots who had died in a crash the previous day in Ladakh was his son, Major K E Padmanabhan (the other was Major Sunil Ganapathy, the brother of another friend)!

I was ashamed of myself for lack of domain awareness, but also amazed at the same time at the poise and equanimity displayed by Mr Rammohan in the face of the tragic event.

After all, there cannot be a bigger burden for a father to carry than his young son's body. And here he was giving no indication of the sorrow he must have been going through at that hour.

In the long term the grief did affect him though. In these past 10 years, I found him increasingly pessimistic and withdrawn. But he continued to write and talk at various forums and kept up the demand to treat tribals more compassionately.

His kind of leaders and human beings are indeed rare.

Will miss you Sir! 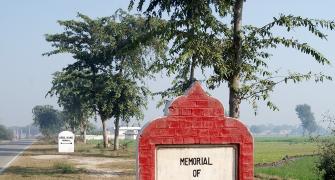