In an apparent softening of stand, social activist Anna Hazare on Sunday said Parliament was supreme and would accept its decision if it rejects the Lokpal Bill. Hazare also showed some flexibility on the August 15 deadline he had set for passage of the Lokpal Bill by Parliament saying he was open to extending it if he found that the government was on the right path.

"We will have to accept it. We believe in democracy," Hazare said in reply to a question on what would be his stand if Parliament rejected the Lokpal Bill drafted jointly by the government and representatives of the civil society.

'Can show some flexibility on Aug 15 deadline' 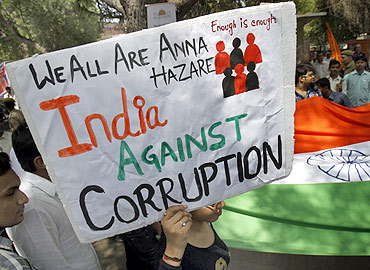 Image: A supporter of social activist Anna Hazare holds up a sign during a campaign against corruption in New Delhi
Photographs: Adnan Abidi/Reuters
Hazare, who called off his fast on April 9 after government notified a joint draft committee, had set August 15 deadline for passage of the bill failing which he would again go on a fast.

"There can be some flexibility once we are convinced that the Bill is on the right track," he said in an informal interaction with a group of journalists.

However, he felt that it could be possible for Parliament to take a decision on the Bill within a month.Hazare agreed with a questioner that his method of agitation could be called "terrorism of principles" so long the motive behind it was public good. "It is not wrong to say that we are engaging in terrorism on principles. But it has to have an element of public welfare in it. This is necessary, otherwise it would lead to dictatorship," he said.

'Open to consultations from political parties over Bill' 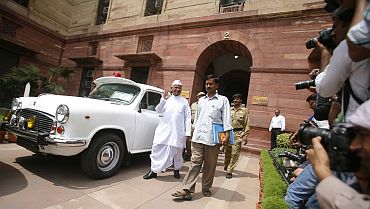 Image: Hazare waves to photographers after attending a meeting at the finance ministry in New Delhi
Photographs: Parivartan Sharma/Reuters
Hazare said he was open to have wider consultations on the Lokpal Bill and was also willing to involve the political leadership of the country. "We have to take everyone into confidence, including the political class. If they have doubts we will discuss with chiefs of political parties," he said.

He said he was open to discuss other drafts of the Lokpal Bill, which the government had said it has received from various other organisations.

Hazare admitted that corruption would not end with the passage of the Lokpal Bill, but it would definitely help curb such practices to some extent. He favoured stricter laws for government servants, including one that made declaration of assets compulsory for every one.

For politicians, he said the law should have provisions for automatic launch of investigations if there was a large difference in the assets declared by them between two consecutive elections.

'I have never shared the same dais with RSS' 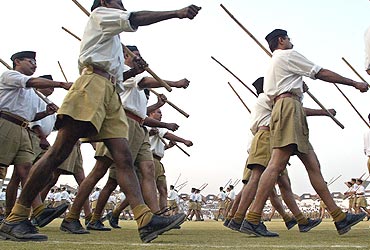 Dismissing allegations of links with the RSS, Hazare said, "I never went close to them nor have I allowed them to get close to me. I have never shared the same dais with RSS". Asked the reasons behind his prominent supporters not joining him on fast-unto-death on the Lokpal Bill, Hazare said it had been decided earlier that only he would sit on fast.

The fast which began on April 5 was called off after 98 hours following a gazette notification by the government on constituting a joint drafting committee on the Lokpal Bill.

Right To Information activist Arvind Kejriwal, former Indian Police Service officer Kiran Bedi and social activist Swami Agnivesh were among those who were in talks with the government for a solution as Hazare continued with the agitation.

"There was a clear distribution of work among ourselves. If everybody had sat on fast, who would have held talks with government," Hazare said when asked why Kejriwal, Bedi or lawyer Shanti Bhushan did not join the fast.

'Will not contest elections or float political party' 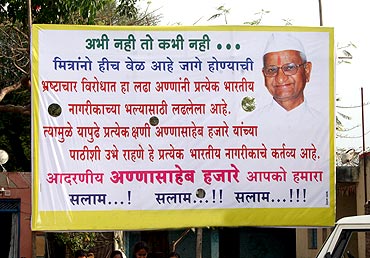 Image: Banners put up in Hazare's support, in his village Ralegan Siddhi
Photographs: Sanjay Sawant/Rediff.com
Hazare said he would undertake a tour of 20 states beginning this month-end at Lucknow to take the message of fight against corruption to the people. He categorically ruled out contesting elections or floating a political party and said his aim was clear to continue to fight for public good. "I will distance myself from any person who would try to make political capital out of this agitation," he said.

Hazare said he would insist on videography of the proceedings of the joint committee meetings from the next
meeting onwards. "We were told the drawbacks of telecasting the meetings of the joint drafting committee. So, we agreed on not telecasting the same. We came to know only later that only audio recording of the meeting was done. What is the harm in videography? I will insist on video recording of the entire proceedings at
the next meeting," he said.
More