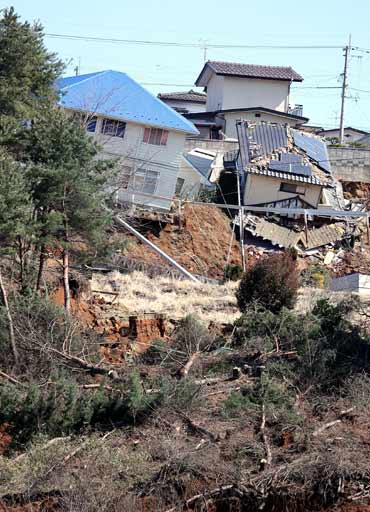 Image: Houses are left damaged by landslides triggered by a quake off the coast of north-eastern Japan
Photographs: Kiyoshi Ota/Getty Images

Scientist J R Kayal explains the why the monster quake that hit Japan caused such havoc and why it gave rise to a tsunami that compounded the misery.

At 2.46 pm Japan time, an earthquake M8.9, Lat:37.68N, Long:143.03E, depth: 20 km below the ocean's surface, off the coast Tohoku Earthquake, destroyed most parts of the Miyagi Prefecture, about 370 km north from Tokyo. The devastation was compounded by the earthquake shaking as well as by the tsunami, and more so with the nuclear power plant disaster which is very unfortunate!

Source of the tsunamigenic earthquake 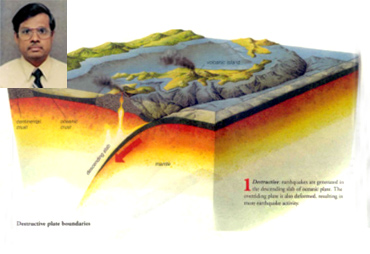 The sources of such tsunamigenic earthquakes are the gigantic subduction zones where the lithospheric plates (first 100-200 km thick earth's crust), that spreads from the mid-ocean ridges, goes down below the ocean trenches.

Subduction of the Pacific plate below the Japan trench is illustrated in an image on the left. It shows the Japan Trench, subducting Pacific plate, overriding Eurasian plate and also the volcanic arc.

All along the subduction zones volcanic arcs are found, the subducting materials get melted at the depth due to high temperature and pressure, and comes out as volcanoes.

The subducting plate moves at an average rate of 50 mm/yr; its interaction with the overriding plate causes earthquakes; small shocks frequently; strong M6.0 and large M7.0 intermittently, and great M8.0 at intervals of 50-100 yrs, and mega events M 9.0 rarely.

Japan among four mega quakes since 1960 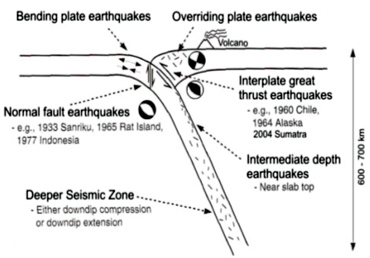 Since 1960 we have experienced four such mega events in the world including the 2011 Japan earthquake (image on left) that caused huge destruction along with the tsunamis. All these mega events occurred in the plate interface by thrust mechanism at shallower depth ( 20 km), thus named mega thrust tsunamigenic earthquakes. 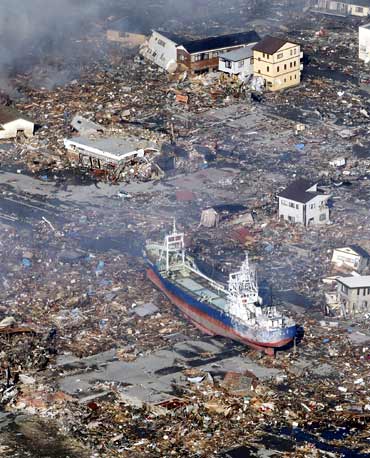 Image: A ship tossed up onto city streets by a tsunami after the earthquake is pictured in Kesennuma City
Photographs: Kyodo/Reuters

The 2011 mega thrust earthquake at a shallower depth in the subducting Pacific plate, due to the accumulated stress over past few hundred years, thrust up the overriding plate and generated the tsunami.

A huge earthquake of M9.0 occurred with an average slip 10-15 m at the earthquake source, that bounced back a huge sea wave of the order of 100-200 km of wave length (length between the crest and trough of the sea wave) with 1-2 m height. This sea wave moves at a speed of (gh) 1/2 where g is the acceleration due to earth's gravity and h is the seawater depth.

So, with an average 3 km deep seawater the wave moves with a speed of 300-400 km per hour. When the waves reach to the coast, the huge (kinetic) energy converts into the Tsunami, i.e the sea wave jumps to a height of 10-15 metres and inundate the land up to 1 km or more distance.

This is what had happened due to the recent four mega thrust earthquakes at the Chile trench in 1960, Aleutian trench, Alaska in 1964, Andaman-Sumatra trench in 2004, and now at the Japan trench in 2011.

In the subduction zones, the deeper 100-600 km earthquakes within the subducted plate would not create such devastation. The normal faulting as well as the strike faulting earthquakes, though could be at a shallower depth (20-50 km), normally does not generate M9.0 earthquakes.

The energy release of a great earthquake M8.0 is of the order of one million atom bomb of the Hiroshima type. And the energy release of an event of M 9.0 is about 30 times of M8.0; in other words the 2011 Japan event is equivalent to occurrence of 30 earthquakes M8.0 at a time. So the seismic hazard is unimaginable, and along with such seismic hazards the tsunami just wash out everything within 1-2 km in the coastal land. That is what we are seeing in Japan now. 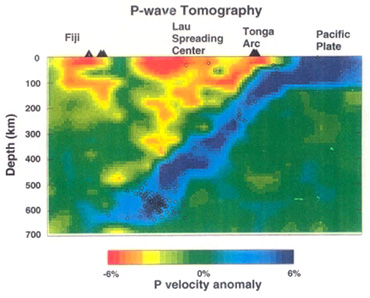 With the advancement of seismic instrumentation earth scientists are able to understand earthquake source zones, earthquake processes. Detailed images of the seismic structures are also made by seismic tomography, like the medical scanning of a human body.

Doctors have much better control to do scanning of the human body, but can't predict its last breath. Earth scientists are also unable to predict earthquakes with exact time, space and magnitude till date.

With the state of art technique, it is, however, possible to identify the most vulnerable zones of seismic hazards. It has been also possible to mitigate disaster by earthquake and tsunami warning systems.

By these warning systems, automatic shut down of nuclear power plant and emergency services are made possible, particularly in Japan, and for the whole Pacific countries tsunami warning system works well. Still we face disasters to learn further lessons!

Lessons to be learnt 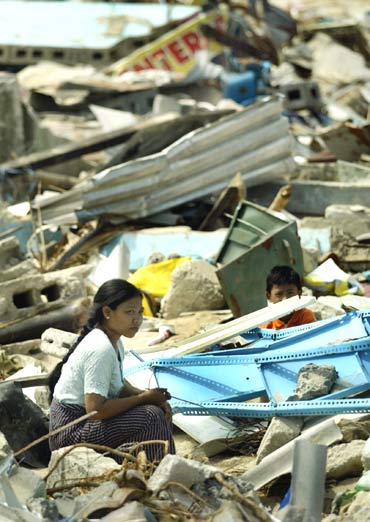 Image: A Nicobarese family, who survived lthe Indian Ocean tsunami, sit among the debris of damaged houses in Lapathy village in the badly devastated Car Nicobar island in January 2005
Photographs: Punit Paranjpe/Reuters
The earthquake-resistant houses, multi-storey buildings, early warning systems, preparedness as well as awareness reduced the casualties to a great extent in Japan compared to its past history or compared to say the 2004 similar tsunamigenic earthquake in Andaman-Sumatra subduction zone. But its failure to protect the nuclear power plants is so unfortunate!

There are some questions or public doubts that possibly the Fukushima nuclear power plant in Japan was not designed to withstand the M9 earthquake shaking and or the subsequent huge tsunami. Questions also arise whether it is advisable to have nuclear power plants near tsunami-prone areas?

In India, we have four most earthquake-prone zones -- the Himalayas, northeast India, the Andaman-Sumatra islands and the Kutch region in Gujarat. But have we developed the required preparedness and awareness for a great earthquake in these regions?

In a scientific assessment it is claimed that if the 1905 Kangra (western Himalaya) earthquake M8, that killed about 19,000 people, or the 1897  Shillong earthquake M8 repeats today it would kill more than 2 lakh people with the growth of population, houses and unawareness. This is a serious issue faced by the National Disaster Management Authorities in India.

In India, mainly the east coast areas are vulnerable to tsunami from earthquakes at the Andaman-Sumatra subduction zone. Our newly established tsunami warning system at the Indian National Centre for Ocean Information Services, Hyderabad is now equipped with a tsunami early warning system.
Possibly, we need to be fully geared up with an earthquake early warning system too for the automatic shutdown of the nuclear power plants as and when required.

We normally design a dam or a nuclear power plant keeping in mind the maximum magnitude scenario of the past earthquake. Today the question arises whether this is sufficient in context of the Fukushima plant disaster?

In conclusion, we can only say that we have to live with nature. Neither the earthquake can be stopped nor the tsunami. We have to keep ourselves well prepared and in full awareness!
More