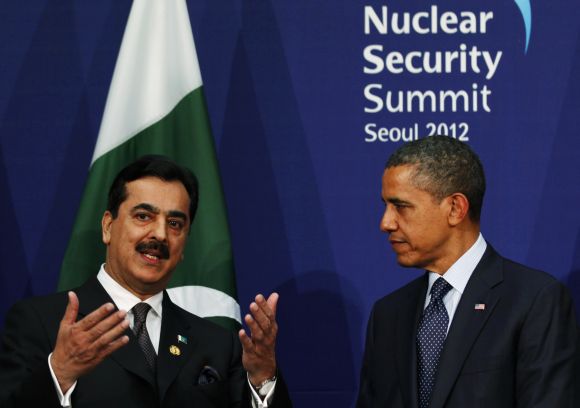 Image: Pakistan's PM Gilani talks to US President Obama during their bilateral meeting on the sidelines of the Nuclear Security Summit in Seoul
Photographs: Larry Downing/Reuters B Raman

The death of Osama bin Laden on May 2 last year has not removed or diluted the threat of jihadi terrorist organisations acquiring a nuclear capability, argues B Raman.

The second Nuclear Security Summit currently being held in Seoul, South Korea, would make a fresh evaluation , inter alia, of the security of nuclear materials in the possession of many countries.

Threats to nuclear security arise from two factors -- accidents in nuclear establishments arising from natural or man-made causes and illegal acquisitions of nuclear materials and technology by state as well as non-state actors.

While there is a laid down and frequently tested drill for coping with nuclear accidents, protective measures to prevent the illegal acquisition of nuclear materials and know-how by state and non-state actors have not been satisfactory. 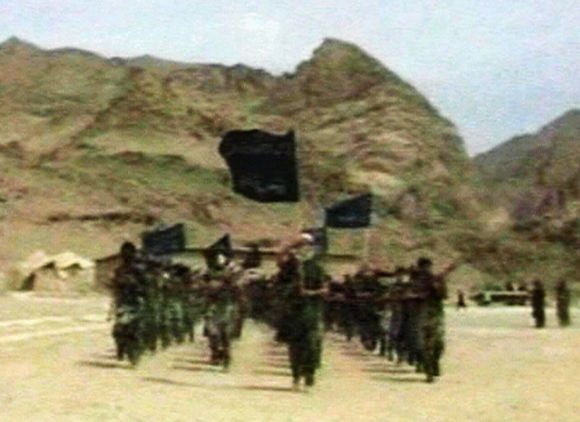 Fears of non-state actors clandestinely acquiring nuclear materials and technology acquired a new dimension in the late 1990s after the famous interviews given by slain Al Qaeda chief Osama bin Laden to US journalists from Kandahar, where he was then based, justifying the right of Muslims to acquire a nuclear weapon and to use it, if necessary, to protect Islam.

Since then fears of Pakistan's Islamic bomb, as it is referred to by Pakistani Islamic fundamentalist organisations, being transformed into a jihadi bomb in the hands of Al Qaeda and its affiliates have been preoccupying the minds of nuclear security experts.

These fears were aggravated after the US troops which defeated the Taliban after 9/11 attacks unearthed evidence to show that Sultan Bashiruddin and Abdul Majid, two retired nuclear scientists of Pakistan, were in touch with bin Laden and had met him in Kandahar. The two were arrested by the Pakistanis and interrogated by the Americans.

The interrogation did not unearth any incriminating evidence against them. Despite this, the fact that two Pakistani nuclear scientists, who had occupied important positions in its nuclear establishments, were in contact with bin Laden, showed that jihadi and other terrorist organisations might be able to acquire a nuclear capability not only through theft or other illegal means, but also by the complicity of the personnel of Pakistan's nuclear establishments.

This fear would now extend to the personnel of Iran's nuclear establishments. In the case of North Korea, the dangers of non-state actors getting hold of its capability are not rated high. 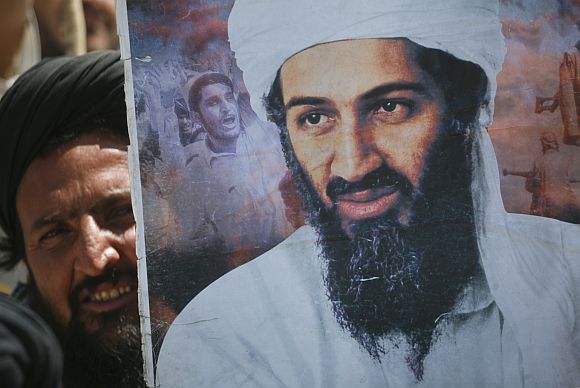 Image: A supporter of the Pakistani religious party Jamiat-e-ulema-e-Islam holds an image of Al Qaeda leader Osama bin Laden during an anti-US rally on the outskirts of Quetta, on May 6, 2011.
Photographs: Naseer Ahmed/Reuters

The death of Osama bin Laden on May 2 last year has not removed or diluted the threat of jihadi terrorist organisations acquiring a nuclear capability.

True, there has been no statement from Al Qaeda or its associates or their leaders after the initial statements of bin Laden in the 1990s, about the right of the Muslims to acquire a nuclear capability.

The absence of statements on this subject by jihadi leaders and their organisations cannot and should not be interpreted as indicative that these organisations and their present leaders did not attach the same priority to this jihadi task as Osama did.

Al Qaeda has definitely suffered a set-back as a result of the death of bin Laden and other leaders in the Af-Pak region and Yemen due to special operations undertaken by the US.

Despite the decimation of its leadership, its GenNext continues to show a high level of motivation as was seen by the recent terrorist incidents in France. There has been a geographic spread of its activities.

The threat from Al Qaeda and its affiliates and the dangers of their acquiring a nuclear capability have to be factored into in any security planning for nuclear establishments and personnel.

The discussions in conferences such as the first Nuclear Security Summit in Washington, DC, and the present one in Seoul focus on physical security measures to prevent acquisitions through thefts and other illegal means.

With countries such as Pakistan participating in their deliberations, it would not be possible for them to have any meaningful discussions to prevent acquisition of nuclear capability by terrorist organisations through the complicity of personnel in nuclear establishments.

This is a matter that has to be discussed in more restricted meetings of experts of intelligence agencies from India, the US, Japan, South Korea, Australia, Russia and the European Union countries.

This would require a high level of HUMINT (human intelligence) and TECHINT (technical intelligence) capability, joint operations to collect intelligence and arrangements for sharing and analysing the collected intelligence. India should take the leadership in working for such a mechanism if it has not already done so.