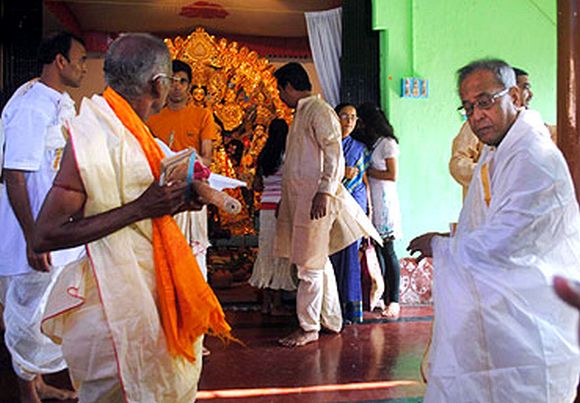 Image: From our archives: President Pranab Mukherjee with his family members during Durga Puja celebrations at his ancestral home in this 2011 photograph
Photographs: Dipak Chakraborty Indrani Roy Mitra in Miriti, Birbhum

Rediff.com's Indrani Roy was the only journalist to attend President Pranab Mukherjee's ancestral Durga Puja celebrations at Miriti village in West Bengal, and was charmed by the sight of the Head of State playing a gracious host during the festivities.

You can attend the Saptami Puja at Mukherjee Bhavan but can't take photographs. There can't be any one-to-one interaction too," President Pranab Mukherjee's private secretary Pradeep Gupta was categorical when I met him outside Mukherjee's ancestral home at Miriti village in Birbhum on Saturday afternoon.

Nevertheless, the offer seemed irresistible. Here was the country's highest-ranking personage, continuing a tradition like always.

The President's son Abhijit Mukherjee, member of Parliament from Jangipur, had told me earlier during a casual chat over the phone that his father was a voracious reader and loved to read the works of ace Bengali writers.

"I have got some books as a gift for the President," I told Gupta.

"You can hand them over yourself once the boss finishes his morning puja tomorrow," he assured me.

Thereafter, I resurfaced at Mukherjee Bhavan on Sunday morning.

Walking through the metal detectors and other security checkpoints, I stationed myself in a corner of the expansive thakurdalan (open courtyard).

Right in front of me was the mandap in which Goddess Durga was being worshipped by a meticulous priest, who had none other than President Mukherjee as his companion.

Mukherjee was wearing a spotless white dhoti and uttoriyo (the cloth covering the upper body).

The dhakis (drummers) were sitting on the ground, lighting up an occasional bidi and drumming up Puja tunes to the accompaniment of kansor ghonta (a percussion instrument) whenever asked to do so by the priest.

"It's amazing to see Pranabda spending so much time here despite his busy schedule," said an elderly neighbour sitting close to me.

Mukherjee Bhavan was cordoned off by security personnel and the pandals at the frontyard and the back wore hues of the tricolour.

There were rows of chairs facing the mandap.

The President's security personnel occupied the front rows (though they had to be on their toes mostly), his medical team occupied the second row and local police officers and constables were seated behind them.

The President's car was parked in a corner.

Maintaining security for the Head of the State had been a back-breaking exercise, a police officer told rediff.com on condition of anonymity.

A constable, Mausumi Roy, was more forthright, "The Puja leave of the entire police staff of Birbhum got cancelled this year."

"We organise Durga Puja at our village home in Bardhaman. I am missing my folks so much, but what to do?" she smiled drily.

I could empathise with her instantly.

After all, I too was away from home and family.

One of Roy's colleagues joined the conversation to voice his grievance: "I haven't had a shower in the last two days."

People were pouring in from every corner to Mukherjee Bhavan to catch a glimpse of the Head of the State observing the Puja rites.

"It's a rare opportunity. Pranabda has made us proud. We have come here to bask in his glory," said a man in his 60s, who claimed to have travelled 40 kilometres to be there.

There was no bar on anyone entering Mukherjee Bhavan on the first day of Puja.

Speaking to rediff.com earlier, the President's secretary had said, "We have got strict instructions from the boss not to bar anyone from visiting the Puja pandal.

"The visitors won't be allowed to carry a camera or a mobile phone inside the house and will be frisked on entry but they are most welcome to participate in the Puja.

"They are our special guests. It's a special occasion and the honourable President wants one and all to be a part of it," he added.

The entire Mukherjee Bhavan was buzzing with activity. One could see men carrying sacks of rice to the kitchen where about 15-20 people were busy cooking bhog (festive meal) for hundreds of guests.


Mukherjee's son was supervising every aspect of the huge preparations.
As the day rolled, morning puja for Saptami was almost over.

Suddenly one could notice a flurry of activity in front of the deity.

The President could be seen alongside the priest while two of the relatives from inside the house helped his wife Shubra Mukherjee climb the stairs leading to the deity.

Offering her puja, she came down slowly, exchanging a namaskar and a smile with every one she met on her way.
Mukherjee's elder sister too was there.

Amid the din, one could hear the soft yet clear voice of the President doing the Chandipath.

That marked the end of the morning session of the puja.

The security officials thereafter got busy clearing the way for the President.

As brisk as ever, Mukherjee got down the stairs, smiled at one and all, enquired about their wellbeing and went inside the house. People waiting to meet him were then asked to form a queue and follow him.

The President, accompanied by his securitymen, went to the first floor while his wife went to rest in one of the ground floor rooms.

Mukherjee's kin could be seen carrying huge trays of prasad into the house. It was time for them to set the lunch for the visitors in the sprawling backyard.

Their repeated calls for lunch went unheeded as all were waiting to pay their respects to the head of the house.
And he did not disappoint them.

Clad in a white kurta and dhoti, Mukherjee approached the gathering, his hands folded. Now, it was an opportunity for me to hand over the books I have been holding on to since morning.

As I identified myself and touched his feet, he said, "Onek onek dhonyobad boigulo anar jonnyo (thanks a lot for the books). Amar ekhane kheye jaben kintu (Please do have lunch here)."

The housewife whom I had met earlier in the day was absolutely right. "During Durga Puja, Pranabbabu sheds his political garb. He is just the borobabu, a perfect host."

Pranabbabu wasted no time in meeting his visitors one after another and got into an informal discussion with them.
His schedule was tight as he had to soon leave for some local functions in and around Miriti.

"The progammes were planned in such a way that he could be back for the sandhya arati," said Gupta.

After all, it was his Puja. And Mukherjee ensured that he did not miss a single part of it.

Away from Mukherjee Bhavan, a group of boys, all teenagers, were seen inspecting the President's helicopter from a permissible distance.

Apart from deliberating on the technical details of the flying object, one of them threw in a thoughtful line, "It gives me goose bumps to think that this obscure village produced the 13th President of India."

I couldn't but agree.