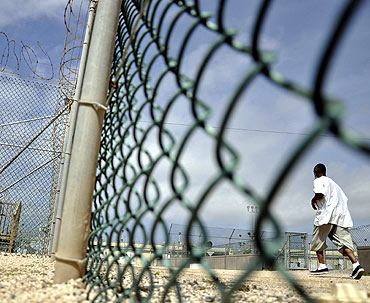 Image: A detainee runs inside an exercise area at the detention facility at Guantanamo Bay
Photographs: Michelle Shephard/Reuters

World's most wanted terrorist Osama bin Laden, the mastermind behind the worst-ever terror attack on US soil, has been killed in Pakistan.

Without their high-profile leader to guide them, what step will terror outfit Al Qaeda take next?

Al Qaeda terrorists had earlier threatened to unleash a 'nuclear hellstorm' on the West if their leader was nabbed or killed by Western forces.

A senior Al Qaeda commander had claimed that the terror group has stashed away a nuclear bomb in Europe which will be detonated if bin Laden is ever caught or assassinated, according to new top secret files recently made public by internet whistleblower WikiLeaks.

The documents contain secret details about the background to the capture of each of the 780 people held at Guantanamo Bay detention camp in Cuba, along with their medical condition and the information they have provided during interrogations. 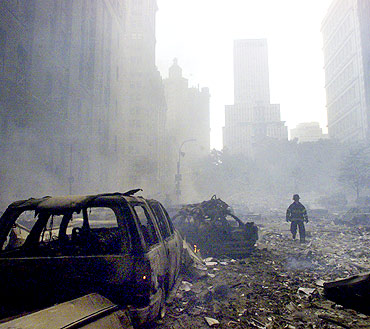 Image: A firefighter walks amid rubble near the base of the destroyed World Trade Centre on Sept 11, 2001
Photographs: Peter Morgan/Reuters

The documents, which have been released to select European and US news outlets, reveal that the day 9/11 terror killings took place in the United States, the top leaders of Al Qaeda had met in Karachi.

The mastermind of September 11 attacks watched the horrifying scenes of the planes crashing into the twin towers of World Trade Centre beamed live on TV along with key Al Qaeda commanders at a safehouse in Karachi.

According to the documents, the alleged mastermind of the bombing of USS' Cole off Yemen waters was recovering from an tonsillectomy in a nearby hospital and the alleged organiser of the 2002 Bali bombing was buying lab equipment for a biological weapons programme. 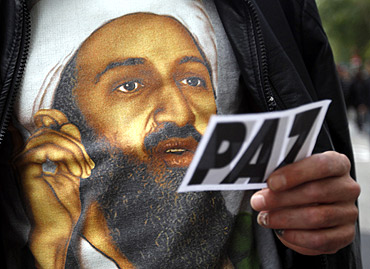 Image: A man wears a T-shirt with the image of Osama bin Laden during a rally
Photographs: Jose Manuel Ribeiro/Reuters

Within a day, much of the Al Qaeda leadership disappeared back to Afghanistan to plan a long war, the Washington Post reported, quoting the fresh leaks on whereabouts of the international Al Qaeda terror brigade.

The cache of classified military documents portray the planning of the 9/11 terror attacks and whereabouts of its plotters including the world's most wanted terrorist Osama bin Laden and his deputy Ayman Al Zawahiri on that fateful day.

The Guantanamo detainees are assessed "high or medium or low" in terms of their intelligence value, the threat they pose while in detention and the continued threat they might pose if released. 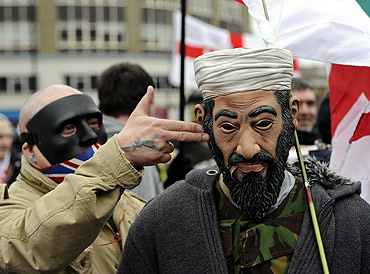 The leaks say that four days after September 11 attacks, bin Laden visited a guest house in Afghanistan's Kanadhar province where he told his Arab fighters to "defend Afghanistan against infidel invaders" and to "fight in the name of Allah".

The intelligence report says after the 9/11 attacks began a peripatetic three weeks for bin Laden and his deputy as they crisscrossed Afghanistan handing out assignments to followers, meetings with top Taliban leadership and delegating control of Al Qaeda to the group's 'shura' council, presumably because he feared being captured or killed as US forces closed in.

The leaks also refer to a meeting held in Kabul where bin Laden gave instructions to continue operations against Western targets, dispersed his fighters from training camps and send women and children, including some of his wives, to Pakistan. 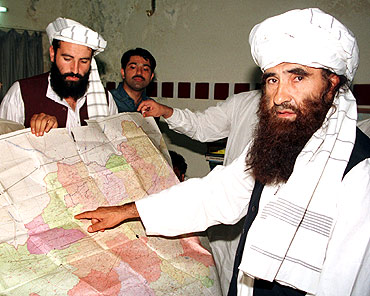 Image: Jalaluddin Haqqani (Right) points to a map of Afghanistan during a visit to Islamabad in Oct 2001
Photographs: Reuters

The tapes also refer to a meeting in October 2001 between bin Laden and Taliban leader Jallaudin Haqqani, who continues to lead a deadly insurgency against the US and its allies in Afghanistan.

It was only after dispersing his fighters and handing the reins of his dreaded organisation to the 'shura' council that bin Laden and Zawahiri fled to the cave complex in Tora Bora near Jalalabad where he was last seen giving a speech to his close followers on November 25.

The Guantanamo leaks trace bin Laden till Tora Bora caves and according to US intelligence, the Al Qaeda chief is known to have survived intense US air strikes on the caves and escaped the dragnet of American special forces sent to hunt him down. 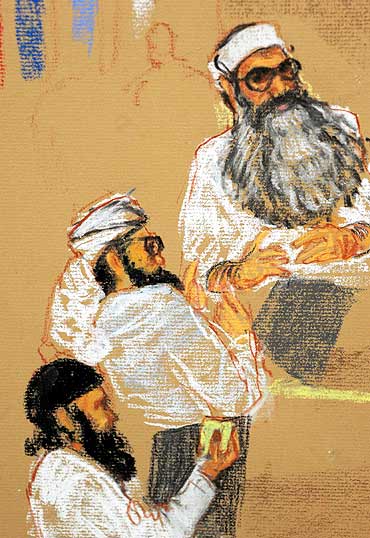 WikiLeaks said that bin Laden and his deputy Zawahiri separated from Tora Bora. While the latter is supposed to have taken refuge with an Afghan family, little is known about the whereabouts of the world's most wanted man.

According to the new documents, in December top Al Qaeda lieutenants gathered at Zarmat, in mountainous regions of Afghanistan between Kabul and Khost, where they began to plan new attacks until they were finally captured.

Among those who met at Zarmat were Khalid Sheikh Mohammad, the self-described mastermind of 9/11 attacks, Abd al-Rahim al-Nashiri, the alleged planner of the USS Cole attack and Abu Faraj al-Libbi, a key facilitator for bin Laden. 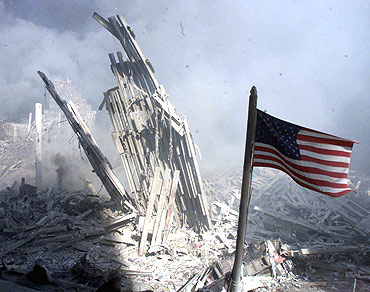 Image: An American flag flies near the base of the destroyed World Trade Centre in New York City
Photographs: Peter Morgan/Reuters

They were addressed by bin Laden at a gathering which was teeming with fighters who were waiting for their passports so they could flee across the border to Pakistan.

After the Zarmat conclave, Mohammad and other senior Al Qaeda fighters began their return to Karachi.

Gradually, Mohammad and other operatives were picked up by Pakistani agents working with Central Intelligence Agency and the Federal Bureau of Investigation.

Ramzai Binalshibh, a key liaison between September 11 hijackers was arrested at a safehouse in Karachi on the first anniversary of the attacks.