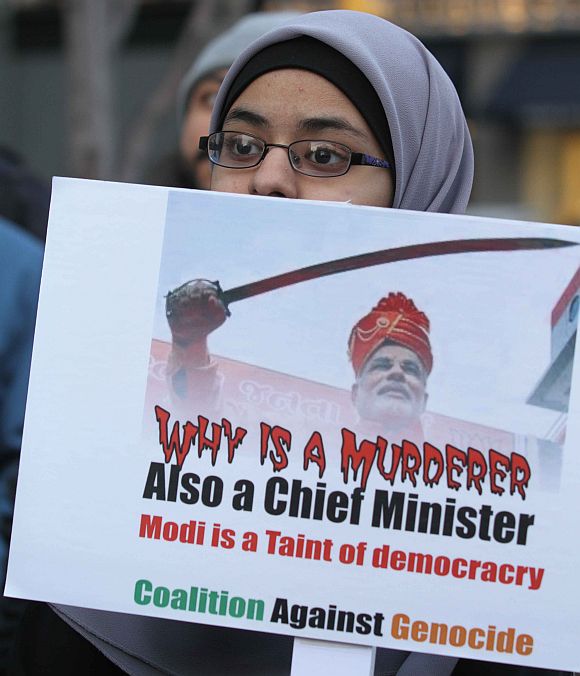 Hundreds of people on Sunday joined the rallies and candle light vigils held in several cities, including New York, Washington, Chicago, Boston, and Tamarac, Florida to mark the 10th anniversary of the Gujarat riots and to pay homage to the victims.

Demanding justice for victims of the riots and chanting against Gujarat Chief Minister Narendra Modi, participants asked for equal rights and protection for the life and liberty of all people irrespective of their religious beliefs.

In New York, people of different faiths assembled under the banner of Coalition Against Genocide, in front of the Gandhi statue at the Union Square in Manhattan. The CAG is a broad-based alliance, which was instrumental in the revocation of a diplomatic visa for Chief Minister Modi in 2005.

'We want Gandhi's Gujarat, not Modi's Gujarat,' people chanted pointing to the statue of Gandhi. 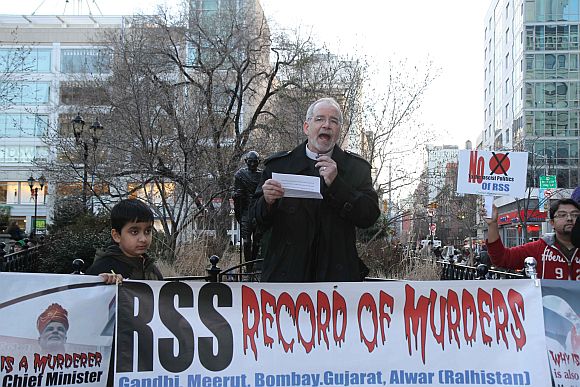 Opening the event, Rev Mark Lukens, president of the Interfaith Alliance and pastor of the Bethany Congregational Church in East Rockaway, New York, noted that people gathered had there to remember the men, women and children who were so brutally slaughtered 10 years ago, simply because of their faith.

"We will not forget the brothers and sisters, sons and daughters and fathers and mothers who perished at the hands of the mob. We can still hear the echoes of their cries as their lives were torn from them and they were torn from us and that we, as Muslims, as Christians, as Hindus, as Jews, as Sikhs, as Buddhists and Bahai, as children of God and children of this great green earth stand in solidarity with them and their still grieving families.

"We will not stand idly by while the principalities and powers, whether they be a political party in India or the police department in New York or so called Christian politicians right here in the US, abuse the rights and personhood of our neighbours because of the way they chose to worship.

"When anyone persecutes my Muslim, or my Jewish, or my Hindu or my Christian or any of my sisters or brothers, they are persecuting all of us, because we are our brothers' keepers and because like those courageous Hindus 10 years ago who braved the fire to rescue their neighbours from the mobs, my neighbour is the one whose need calls upon me to remember that we are all one, branches of a single vine, children of a God, whose likeness we are made," he said. 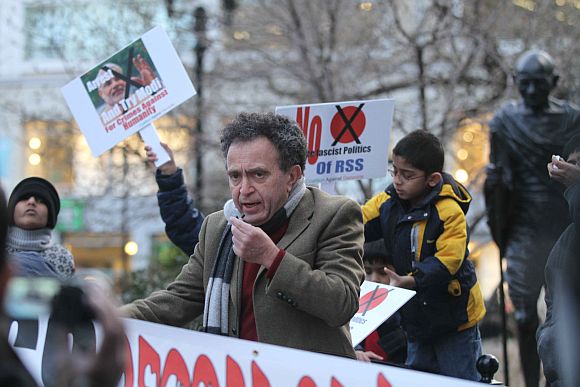 Jewish rabbi (priest) Prof Hillel Levine, the founder of Center for International Conciliation prayed for the victims in Hebrew before ending his speech.

He said he knows what a pogrom is. Drawing on the history of Jewish suffering, he criticised the powerful American Jewish Committee's award to LK Advani, a few years ago. Noting that Advani represents the ideology of hate and violence, he asked the AJC to withdraw the award.

When pointed out the good relations between Israel and India and Jews and Hindus, he said the Jews are also friends with the Muslims.

"Just because there is a problem with the Muslims in Palestine, does not mean that Jews consider all Muslims are enemies," he said.

Joe Lombardo, the national co-chair of United National anti-war coalition, pledged to fight the infiltration of Hindutva ideologues in the US power centres. He said the one per cent who rules the earth needs division and fights to keep their power over the majority or the 99 per cent. They will divide the people on the basis of race, religion or any other thing.

"There is lot of oil under the feet of the Muslims," he pointed out the reason for the growing Islamophobia. 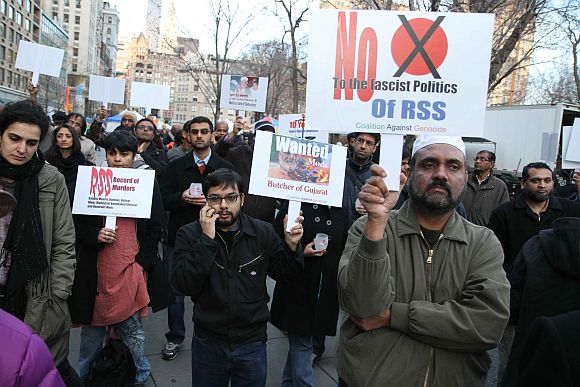 Al-Haj Imam Tali Abdur Rashid, an African American imam who heads the umbrella body of New York area Muslims, Islamic Leadership Council, said the movement that killed Gandhi and tens of thousands of Muslims and Christians will not be allowed to flourish in the US.

He drew parallels between the civil rights movement in the US and the movement by Indian minorities and Dalits and predicted that truth shall overcome.

Prof Biju Mathew, one of the founding coordinators of Coalition Against Genocide vowed to continue the struggle till fascism is completely defeated. He pointed out the right of every person to live with dignity.

Dr Shaik Ubaid, another founding coordinator of the CAG pointed out that it is expanding and more interfaith and civil rights groups are supporting it. This will help defeat the Hindutva ideology in the US and offer vital moral support to the pluralist forces in India, he said.

He asked people in the US to abandon their support for Modi and Hindutva and redeem themselves and the image of India. He noted that as long as Modi remains unwelcome in the US, his dream of becoming India's prime minister will remain unfulfilled. 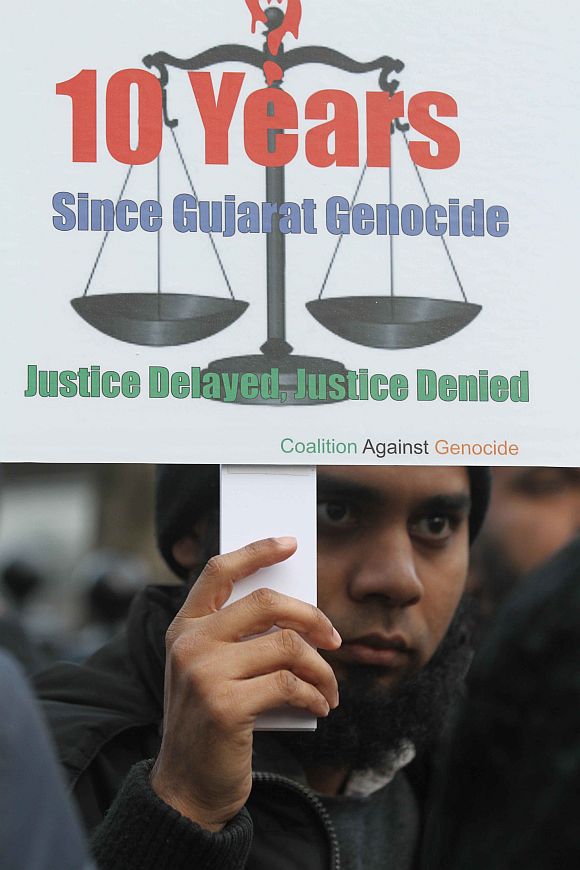 Bhairavi Desai, leader of the New York Taxi Workers Alliance, recounted her joyful childhood days in Gujarat. Her father had kept a description of his childhood days and it was read at his funeral in 2008. It vividly portrayed the harmony and good relations existed among all people.

It is a shame that the same Gujarat witnessed senseless killings and other atrocities, she said.

Sunita Vishwanath, founder of Sadhana, a new organisation for progressive Hindus, said the organisation will fight religious extremism. Hinduism is a search for god, without violence was the definition given by Gandhi and it is more relevant nowadays, she said. Her son Akash Mehta, who, as a 11-year-old organised a protest rally against Union Carbide three years ago, was also present. 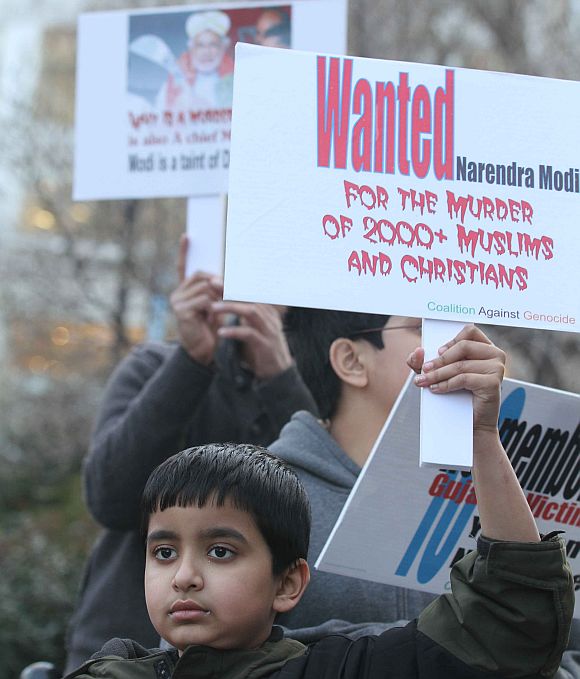 India still remains as it was because of the wisdom of the founding fathers, Yousef Dadani regional vice president of the Indian American Muslim Council said.

He said the killings were not a natural reaction to the Godhra train massacre. The riots continued for five days. The killers and perpetrators roam freely in Gujarat now, while the victims and their families suffer, he said.

Saeed Patel of Non Resident Indians for a Secular and Harmonious India, Juned Qazi of Indian National Overseas Congress, Shaheen Khateeb of Indian American Muslim Council, Monami Maulik of Desis Rising Up and Moving were among the speakers.

The rally was followed by a candle light vigil, the candles representing the lives of all the victims of Gujarat pogroms that were violently snuffed out.

At the rally in Washington, DC, Najid Hussain, the son-in-law of former MP Ahsan Jafri who was killed in the riots, and his son Tauseef Hussain were noted for their presence. Tauseef, Jafri's grandson, was 13 years old when the latter was killed. 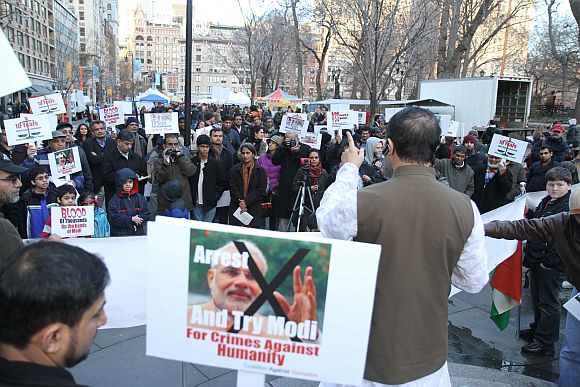 Najid's wife Nishrin was in India in connection with the 10th anniversary.

Recounting her agony all these years, Najid said, "There is nothing that hurts a family more than to see the woman of the house suffer in silence. Nishrin's agony and pain has not reduced one bit in ten years since the killing of her father. Her nightmares are not suppressed one bit. Her tears have not stopped. And that is very painful to my family as a whole, and me in particular."

"There are more than hundred thousand Nishrins and Zakias produced by the Guajrat massacre, who need the balm of justice to begin healing their wounds. Justice is possible in our country only if it is not burdened by the political influences," he said.

"One of the reasons communal violence in India continues unabated is because we do not bring the perpetrators and masterminds of the violence to justice. We politicise the massacre, cite old precedents of violence with impunity, shift blame, and totally ignore the victims. That approach needs to change. The buck must stop here.

"Gujarat was called a model "Hindutva Laboratory". Let Gujarat also be the model to start the process where the architects of the violence -- however powerful, or progressive -- are held accountable and justice served."

Tauseef added: "Ten years after the tragedy, after ignorant carnage, and after blind injustice, it is heartening that so many still come together seeking answers and demanding reconciliation through justice. What we must continue to hold out for is not some emotional salve of vengeance, but a legitimate recognition of the loss of those wronged."

"It is an embarrassment on those representatives charged with protecting the people of Gujarat that a decade has passed without the swift legal retribution Indians should be granted by a functional democracy. As if not enough that contrition has proven so elusive, even simple empathy has been fleeting."

"Our family at least has the privilege of a strong voice and supportive audience, which is more than can be said for the multitude of survivors impacted in so many more ways than us. For those long suffering, and for the sanctity of what our India represents, we must turn catastrophe into a lesson."