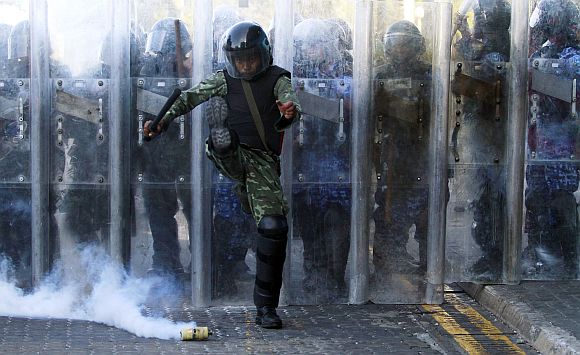 Image: An army officer kicks a tear gas cannister during a clash with the supporters of ousted Maldivian president Mohamed Nasheed in Male
Photographs: Dinuka Liyanawatte/Reuters B Raman

The Indian government appears to have been caught napping in the Maldives on two counts, says security expert B Raman.

First, the Indian government failed to foresee the implications of some arbitrary actions of former President Mohammed Nasheed such as the arrest of the chief judge of the criminal court and disciplinary action against a Sandhurst-trained colonel of the Maldives National Defence Force, who were perceived to be anti-Nasheed and advise him to desist from such actions.

These actions antagonised the judiciary and created fissures in the MNDF and the police. These elements joined hands with anti-Nasheed protesters in forcing him to quit as the President.

Secondly, it failed to realise that despite his antagonising the judiciary and sections of the police and the MNDF, Nasheed retained considerable popular support particularly among the younger generation and was in a position to take the battle against his opponents to the streets.

Instead of keeping quiet till the street equations became clear and instead of desisting from any action that might be misinterpreted as granting legitimacy to the MNDF-engineered replacement of Nasheed by his Vice-President Mohammed Wahid Hasan, the Indian government prematurely made statements that were interpreted in Maldives as amounting to the Indian government's abandoning its support to the democratically-elected President.

When Nasheed's supporters, with a defiant Nasheed at their head, took the battle against their opponents to the streets, the Indian government found itself with its credibility badly weakened. 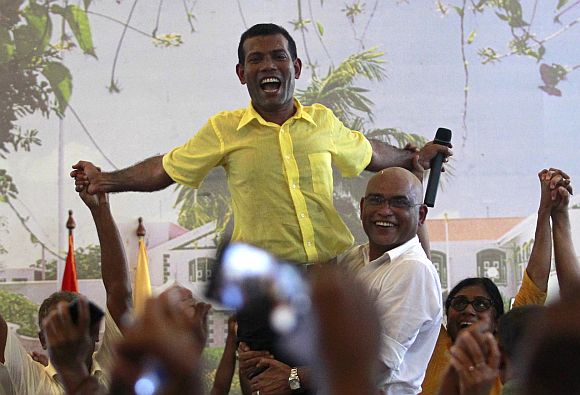 The result: the Indian government's traditional position as the sole arbiter of political fortunes in the Maldives has been badly damaged and a number of international actors from the United Kingdom, the United States, the European Union and the United Nations have rushed to the Maldives to try their hand in internal peace-making, thereby marginalising the traditional role of India.

Only China and Pakistan have not yet entered the political fray in the Maldives. If they do, that will be ultimate humiliation for Indian diplomacy at its southern door-step.

We had earlier lost our clout in Sri Lanka as a result of soft and reactive reflexes and we stand in danger of similarly losing our clout -- even if we have not already lost it --in the Maldives due to similar apologetic reflexes lacking in robustness of anticipation and action.

In the online community, one could notice articulation of condemnation of the Indian government for failing to intervene militarily in the Maldives in support of the democratically-elected government.

Unfavourable comparisons have been made with the robust response of former Rajiv Gandhi, the then prime minister, to support the then President Abdul Gayoom against threats from foreign mercenaries suspected to be from the Liberation Tigers of Tamil Eelam by sending Indian rapid action forces to the Maldives to neutralise the threat. 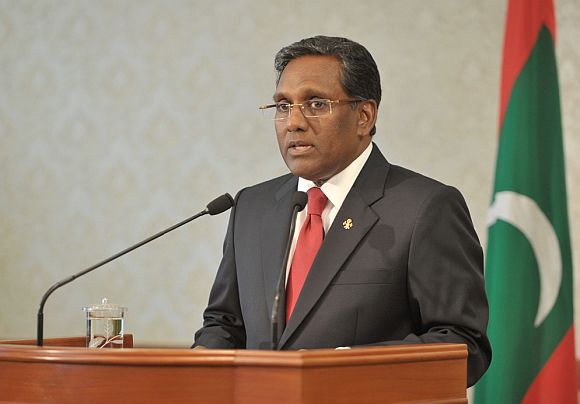 The hesitation of the Indian government to send rapid action forces in response to a reported SOS from Nasheed is understandable because the present situation is qualitatively different from what prevailed in 1988.

The threat to Nasheed was not from external forces, but from sections of his own MNDF and the police due to his perceived arbitrary style of governance. If the Indian government had sent the security forces to the Maldives this time, they would have been called upon to act not against foreign mercenaries and their local supporters, but against sections of the political opposition in the Maldives and their supporters in the MNDF and the Police.

Our security forces would have been able to overcome opposition from the MNDF and the police, but then what about managing the messy sequel--- with the Maldivian security forces many of whose senior officers were trained by us turning hostile against India?

The criticism of the Indian government for not intervening immediately through our Armed Forces is not quite justified.

But there is a lot of actions short of direct military intervention which we could have taken --such as visibly and noisily strengthening our direct action capability in the vicinity of the Maldives to convey a message to the contending forces in the Maldives -- and to external forces that might be tempted to take advantage of the situation to undermine Indian influence.

This is because India was prepared to use its Armed Forces if needed to protect its nationals and interests and rushing a high level and stick-wielding emissary to Male to cajole, if possible, and to force, if necessary, the contending forces not to undermine democracy and not to allow any other external elements to come in and partake of the broth.

The Indian government failed to take any of these actions and now finds itself with diminishing options in the face of an unpredictably evolving situation domestically and internationally. In 1988, the international community recognised implicitly that the Maldives was India's concern and that India had every right to act according to its wisdom.

Even though the situation seems to be slipping out of our hands, we can still retrieve it provided we show leadership befitting a big power and act resolutely on the lines indicated above. Evidence of such leadership and resolute action is missing in Delhi.