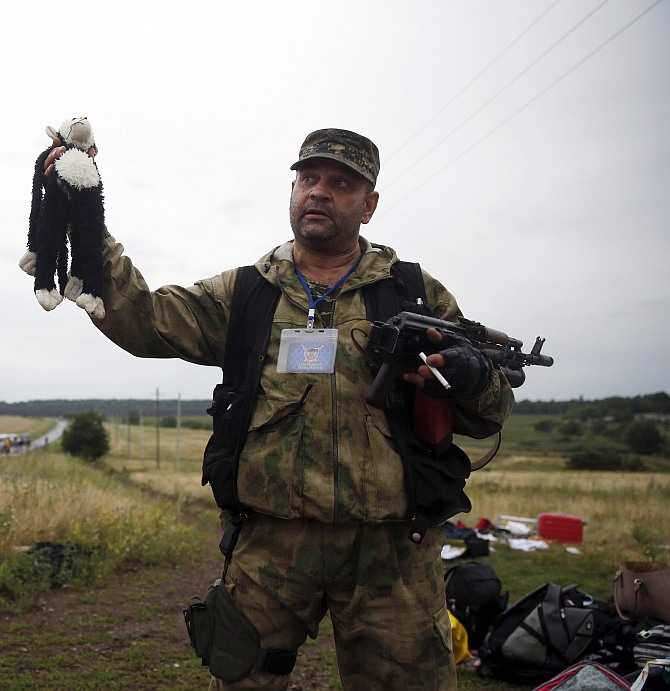 Image: A pro-Russian separatist holds a stuffed toy found at the crash site of Malaysia Airlines flight MH17, near the settlement of Grabovo in the Donetsk region
Photographs: Maxim Zmeyev/Reuters

Ukraine has claimed that it has "compelling evidence" that Russian crew operated the missile system that downed a Malaysian jet with 298 people on board and accused Moscow of helping rebels in trying to destroy evidence.

As the blame game continued with Russia accusing the United States and the West of pointing fingers at it to push their Ukraine agenda, a team of Malaysian investigators touched down in Kiev to try and get to the bottom of what happened to the Malaysia Airlines aircraft that was shot down Thursday, killing all those on board.

Russian Deputy Foreign Minister Sergei Ryabkov said the US administration sought to pin the blame on separatists and Russia without waiting for the results of an investigation.

The Boeing 777 was flying from Amsterdam to Kuala Lumpur as it was downed between Krasni Luch in Luhansk region and Shakhtarsk in the neighbouring region of Donetsk.

It is believed that flight MH17 crashed after being hit by a surface-to-air missile fired from the rebel-held area. 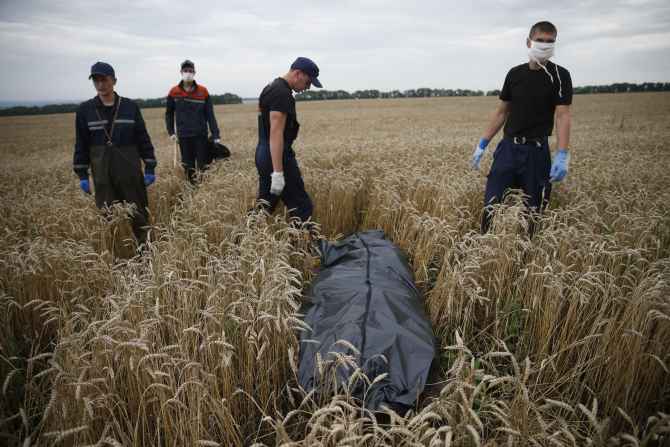 Image: Members of the Ukrainian Emergency Ministry prepare to remove a body at the crash site near Grabovo
Photographs: Maxim Zmeyev/Reuters

Ukraine's counter intelligence chief Vitaly Nada told a news conference: "We have compelling evidence that this terrorist act was committed with the help of the Russian Federation. We know clearly that the crew of this system were Russian citizens."

He also asked Russia to give Ukraine the names and surnames of the crew so that Kiev could question them.

As calls for an independent investigation into the downing of the jet grew louder, German Chancellor Angela Merkel and Russian President Vladimir Putin agreed for an international probe.

The two leaders, who spoke on the telephone, "agreed that an international, independent commission under the direction of ICAO (UN's International Civil Aviation Organization) should quickly have access to the site of the accident... to shed light on the circumstances of the crash and move the victims," a German government statement said. 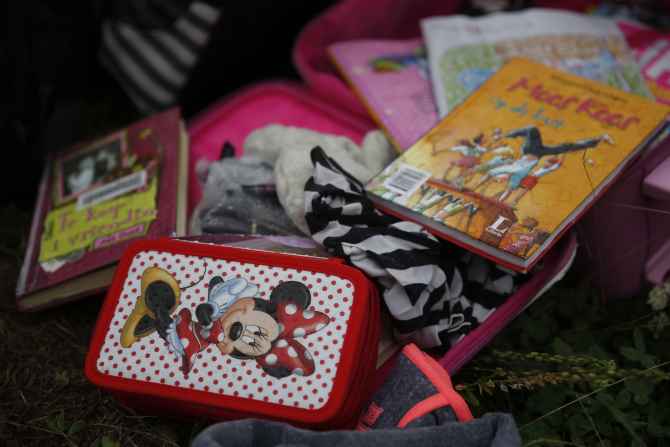 Kiev also accused Russia of helping pro-Moscow rebels of trying to destroy evidence in the downing of the aircraft.

"The Ukrainian government officially announces: terrorists with the support of Russia are trying to destroy proof of this international crime," Ukraine's government said in a statement.

It complained that "the terrorists" had taken 38 bodies to a morgue in the rebel-held city of Donetsk. It said the rebels were also trying to transport the plane's wreckage to Russia.

Meanwhile, Malaysia said its jet never strayed into restricted airspace and its flight path was considered a safe route.

"MH17's flight path was a busy major airway, like a highway in the sky. It followed a route which was set out by the international aviation authorities, approved by 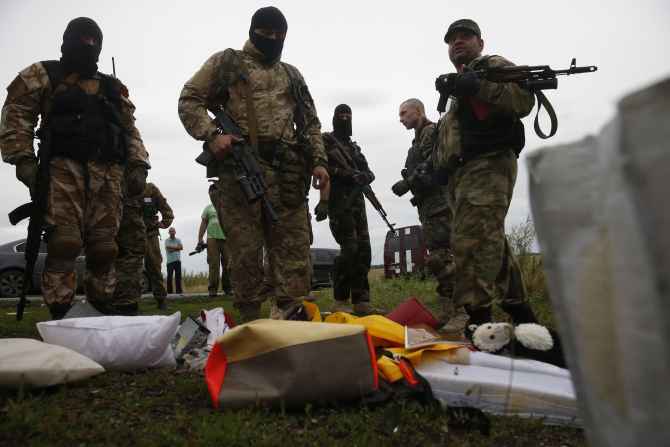 Liow said officials from Eurocontrol stated that two days before the incident, 75 different airlines had flown the same route.

"MH17 flew at an altitude that was set and deemed safe by local air traffic control, and it never strayed into restricted airspace," the minister said, adding that "the flight and its operators followed the rules."

But on the ground, the rules of war were broken, he asserted.

"In an unacceptable act of aggression, it appears that MH17 was shot down; its passengers and crew killed by a missile," he said.

The Transport Minister also confirmed reports that MH17 initially requested to fly at 35,000 feet but was ordered to fly at 33,000 feet by air traffic control operators due to

"other traffic"and that the altitude was deemed safe.

Liow issued an impassioned plea for the MH17 disaster site in Ukraine to be protected from tampering, saying evidence was being compromised in what it called a "betrayal of the lives that were lost."

"Malaysia is deeply concerned that the crash site has not been properly secured," Liow said, adding, “The integrity of the site has been compromised, and there are indications that vital evidence has not been preserved in place." 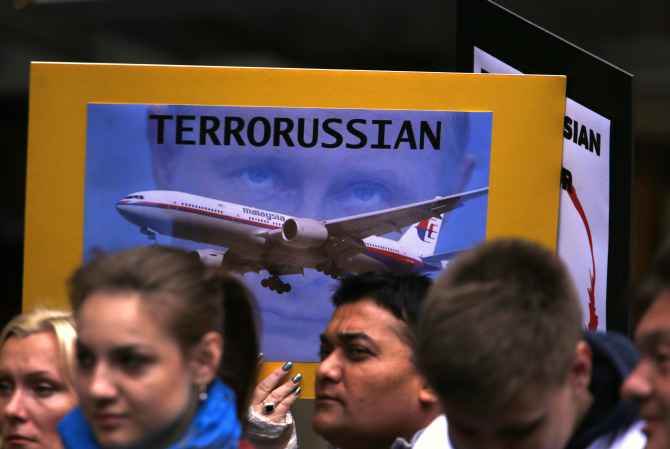 Image: Members of the Australian Ukrainian community hold placards as they hold an anti-Russia rally in Sydney on Saturday.
Photographs: David Grey/Reuters

Liow's assertions came as the Ukrainian government and separatist groups agreed to create a safety zone around the site where Malaysia Airlines jet crashed.

Ukraine Ambassador to Malaysia Ihor V Humenyyi told the Malaysian Bernama news agency that the Ukrainian authorities and the rebels -- currently in control of the territory -- had agreed that no combat action would be carried out in the area of 400 square kilometeres to enable investigations.

Prime Minister Najib Razak today said that Malaysia, as the owner of the downed Malaysia Airlines flight MH17, will ensure that the plane's black boxes will not be under the control of any irrelevant quarters.

According to the international law, the owner of the plane has every right for the black boxes, he said.

"We must follow the international law and those who have no rights whatsoever cannot claim or take over control of the black boxes," he told reporters after meeting with families of victims of the MH17 tragedy in Kuala Lumpur. 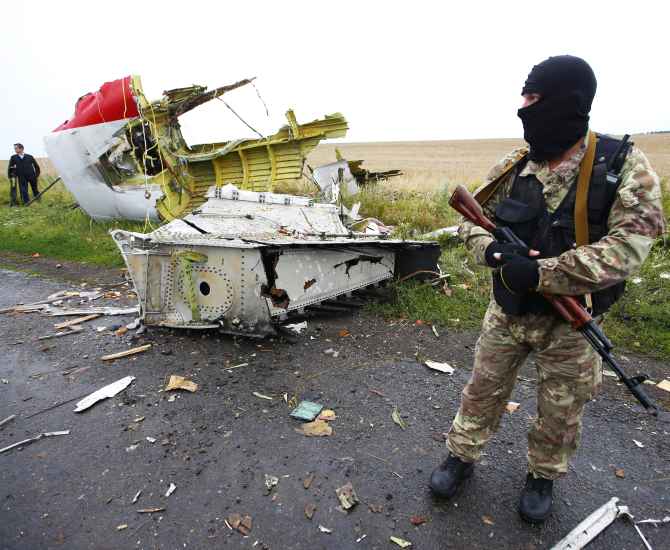 Image: A pro-Russian separatist stands at the crash site of Malaysia Airlines flight MH17, near the settlement of Grabovo in the Donetsk region of Ukraine.
Photographs: Maxim Zmeyev/Reuters

Najib also said the government was committed to doing its level best to bring home the remains of Malaysian nationals who perished in the crash.

"Right now, our team has arrived in Kiev and we are in the midst of making arrangements to enter the area of the scene in Eastern Ukraine. It is about 400 kilometres away (from Kiev), so there are several procedures that must be adhered to before they can get into the area," Najib said.

He said the authorities were taking every step to ensure the safety of the international team moving into the area, especially the investigation team from Malaysia.

"I am sure everything has been done to ensure the safety of the team," he said.

Najib said he spoke to Russian President Vladimir Putin by phone late Friday to stress the need for an objective probe into the crash, amid concerns the site was vulnerable to tampering.

"I also told Putin that the site should not be tampered (with) before the team begins its investigation," he was quoted as saying.

Najib's step-grandmother was on board the ill-fated jet, the country's defence minister confirmed on Saturday.

Hishammuddin Hussein, a minister, said his step- grandmother was also among those killed.

Meanwhile, Ukraine said, the world community, must put pressure on Russia to pull back its terrorists and allow Ukrainian and international experts to carry out their inquiry. 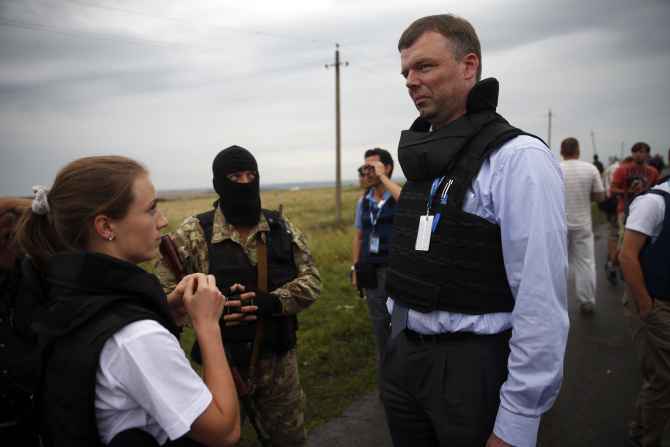 Ukraine's government has the authority to investigate the crash, under international conventions, even though the incident took place in rebel territory

On Thursday, the day the plane tore apart in the sky over Torez, the rebels granted passage to a smaller international team of 21 people from the Organisation for Security and Cooperation in Europe.

But when the OSCE team arrived among the rubble, armed local militiamen greeted them with hostility and throttled their access to the site.

"There didn't seem to be anyone really in control," OSCE spokesman Michael Bociurkiw said.

Armed men, apparently pro-Russia militants, loosely guarded the area but could not answer the monitors' questions, he said.

Tags: Organisation for Security and Cooperation in Europe , Michael Bociurkiw , Ukraine , Torez , Ukrainian
More
© Copyright 2022 PTI. All rights reserved. Republication or redistribution of PTI content, including by framing or similar means, is expressly prohibited without the prior written consent.
Print this
article
ALSO
READ