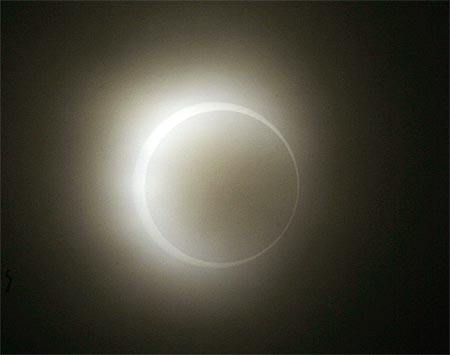 Image: The moon passes between the sun and the earth during an annular solar eclipse
Photographs: Reuters/Crack Palinggi

What does this celestial phenomenon mean to the world and does this astronomical event portend anything for us. D K Hari and his wife Hema Hari discuss the above mentioned issues in their new book,  Will History Repeat Itself? Triple Eclipse of July 2009. Omnious or Promising? the book has been published as part of the Bharath Gyan series by the Sri Sri publications.

'The triple eclipse is a harbinger of catastrophe' 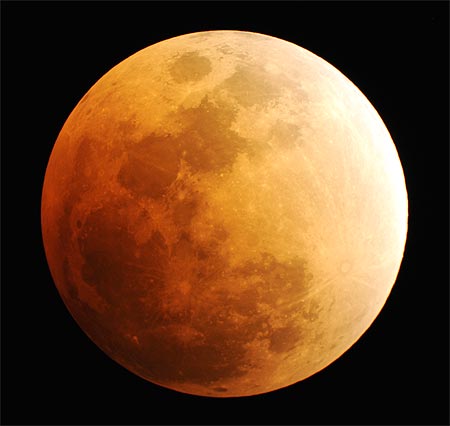 Image: The moon is seen, during a phase of a total lunar eclipse.
Photographs: Reuters/Doug Murray

The second of the triple eclipses occurred in 36 years after the first one in November 3031 BCE. There was a lunar eclipse on October 20,  which was followed by a solar and lunar eclipse on November 5 and November 19,  3031 BCE. Following this sequence, the city of Dwaraka was destroyed after it was submerged in water.

Do these eclipses only fortell castastrophes or do they also have a good message, we ask the author. Hari explains, " If we look at the events of the past, we find that along with such horrific events, there have also been some good events. Post the first triple eclipse, Krishna gave the Bhagwad Gita sermon to Arjuna. The first world war was followed by the Geneva Conference, thanks to which the concept of the League of Nations was born. After the World war II, the United Nations was born.

'Indian panchangas speak of these eclipses 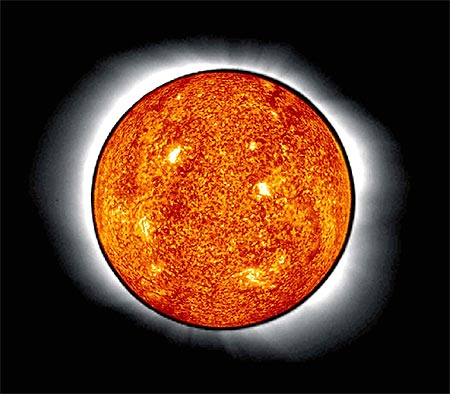 Image: A composite view of a total solar eclipse made using the Extreme Ultraviolet Imaging Telescope instrument on board the Solar and Heliospheric Observatory (SOHO) spacecraft.
Photographs: Reuters

So what major event will we witness after the triple eclipse. Hari says that he cannot predict into the future. "This is not my forte. We have gathered this information and want to spread the message across to the world so that all of us are fore warned. If one looks at India, there are a lot of hotspots around us and trouble could emerge from anywhere. However I am not trying to say that trouble could emerge only for India. It could be anywhere in the world. The eclipses are not definitely India specific."

How have they gathered data:

Hari says that the data regarding the eclipses have been gathered from NASA charts The Indian panchangas also speak about the past and forthcoming triple eclipses. As far as the past is concerned, we have referred to the text in the Mahabharatha and also relied on a new science known as Archeo Astronomy. This new scientific field gives us specific dates of the Mahabharatha.