Sign in  |  Create a Rediffmail account
Rediff.com  » News » 26/11: 'There were no awards, no recognition for injured cops'

26/11: 'There were no awards, no recognition for injured cops' 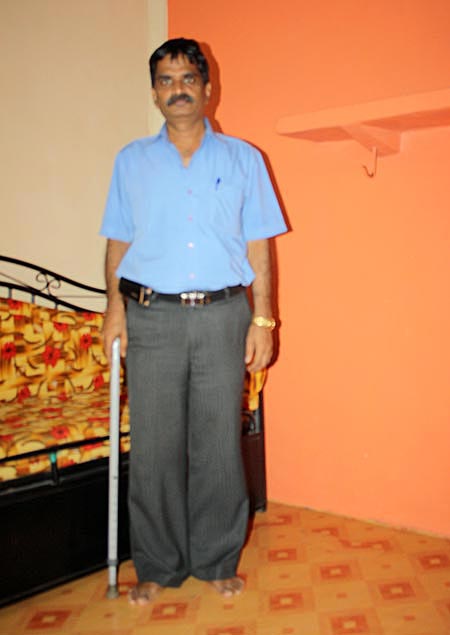 Pravin Pandurang Sawant was on patrol duty when two Pakistani terrorists walked into Colaba's Leopold Cafe on the fateful night on November 26, 2008. One of the bullets hit his leg during the attack and changed his life forever. Sawant cannot walk without the help of a stick forcing the police department to transfer him from 'frontline' duty to a desk job.  He also became the first cop to be hit that day.

Three years on, Sawant has a few complaints but keeps himself going saying he's at least alive and that his family is safe. Swarupa Dutt speaks to his family, which believes that the adversity has only made them stronger.

Pravin Pandurang Sawant was an hour and 30 minutes into his 12-hour shift, when the wireless radio inside his police patrol van crackled with a message from the main control room near Metro cinema. "The operator said there were reports of something like firecrackers being burst near Leopold Cafe on Colaba Causeway, and told us to check it out," says Sawant, who is a police naik.

Sitting on a sofa-cum-bed in his home at the police quarters near the Chhatrapati Shivaji Terminus, the 46-year-old cop says that none of his five colleagues in the van gave it any thought, because there was an India cricket match on.

"It was around 9.30 pm and we were at Colaba market. We reached Leopold's in five minutes or thereabouts and parked across the road. Even as we got off, our van was hit by a spray of bullets," he recalls.

Sawant was the first to get out of the van and saw foreigners lying injured or dead on the road in front of Leopold's. "Don't ask me what went through my mind. I don't know, I don't remember. It's not some romantic moment, you know," he points out, and says he thought it was a gang war.

In any case, he had little time to think for almost immediately, he was shot at -- twice. "First on the palm of my left hand (he holds it up) but there's no scarring and the second shot in my groin," he says.

'This adversity only made us stronger' 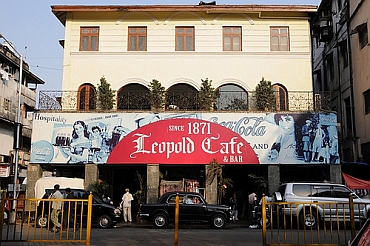 Image: Leopold's in Mumbai is a popular hangout

By then, two of the 10 Pakistani terrorists, Abdul Rehman Bada and Abu Umar, had killed 10 people and injured 28 at Leopold Cafe, and then joined their terrorist partners Shoaib and Javed at Hotel Taj Mahal nearby.

Sawant lost consciousness and much like in a movie opened his eyes in hospital to see his wife peering at him anxiously. His wife Priyanka, who is standing at the kitchen door at their home, says that night she had no idea he was in any kind of trouble since he always did a 8 pm to 8 am shift and she didn't expect him home.

"My colleagues took me to St George Hospital and someone there recognised me and called my brother who is also a policeman. My brother told me later that all the injured and dead from the carnage at CST were being brought to St George (as well as Cama hospital) and quite naturally, there was complete chaos," says Sawant.

His brother moved him to Bombay Hospital where he was operated upon for the bullet injuries in the early hours of November 27.

Three years on, the Sawants have moved on. Their daughters have been doing well academically, one pursuing a bachelors course in management and the other is doing her BCom. The elder daughter, Poonam, was in Std X during the time of the attack but, says Priyanka, she did well in her exams. "We are always together as a family, so adversity only made us stronger. Nothing changed for us," she says. 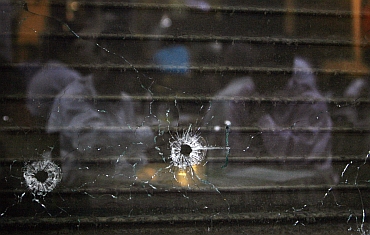 Image: Leopold Cafe has preserved the bullet marks from that night of terror

There is, however, an addition to Sawant's life. A change, if you will. The 46 year old policeman now has a cane. A constant companion, without which he cannot walk.

"After the bullet injury I cannot walk comfortably without a stick. Inside the house I don't need a stick, but manoeuvering stairs, walking on the streets -- it's impossible without support. And I can't run at all. My leg hurts quite badly," he says impassively, but admits he was shocked and upset when the doctor told him the prognosis three years ago.

Consequently, Sawant was transferred from the 'frontline' posting as a beat cop, to a desk job. "Well, obviously, there's no comparison. There's no excitement. I work at the police store doling out stationery. I have regular hours, no shift duty, but I truly (closes his eyes in emphasis) miss the police patrol duty, hearing the disjointed voice on the wireless... but it's OK. It could have been worse," he says.

Priyanka pipes in. "There's no tension now. I can see him at work if I peep from my kitchen window but yes, he misses his work. Kay karnar ata (What can be done?)," she smiles.

His wife adds that they are happy now. Her husband is a calm, quiet person, he doesn't get angry easily, but she knows he's angry within.

Sawant says, "I have no complaints about the police department. They chose to transfer me to this posting because it suits my health now. When I was in Bombay Hospital, Gafoorsaab (Hasan Gafoor, then Mumbai's commissioner of police) came to see me. I was treated with respect. But the government never announced any rewards for injured policemen, only for the dead. No promotions or awards either. I would say, there is no recognition of the fact that we stood up to those terrorists. But even that is fine. I accept it."

'Why can't they just hang Kasab?' 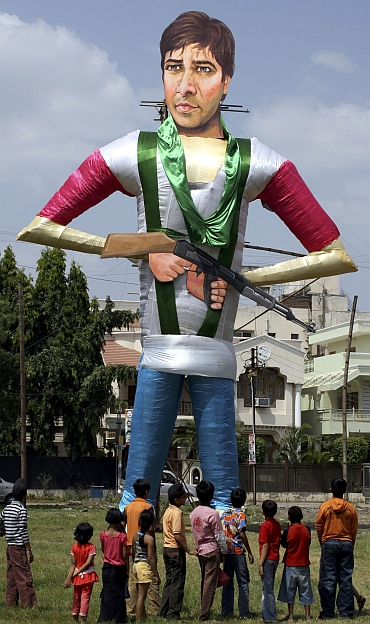 "What I feel angry about, is when I read about Kasab (Ajmal Kasab, the lone surviving 26/11 terrorist), who with his partner Ismail Khan killed 58 and injured 104 at CST. He was handed the death sentence, but has appealed for clemency to the President of India. He is still alive on our money. Why can't they just hang him? But then, I tell myself, we've elected the people who keep him alive. What's the point in getting angry or bitter?"

Sawant's medical expenses are Rs 10,000 per month, much of it due to his bullet injuries, which is not reimbursed.

Each night, before he goes to bed, there's a further reminder of November 26, 2008. A leg massage as advised by his physiotherapist. "My wife follows the doctor's advice religiously, who else will do it," he asks. "Sometimes when I feel a little down, I tell myself, at least I'm alive, I can walk, my family is doing well. It's OK."