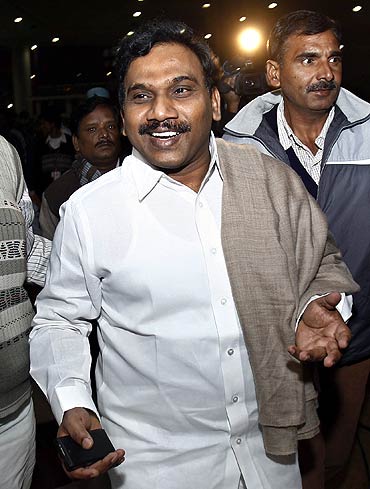 Image: Former telecommunications minister Andimuthu Raja was arrested by the CBI on Wednesday
Photographs: Adnan Abidi/Reuters
Andimuthu Raja's love for poetry is believed to have got him close to Dravida Munnettra Kazhagam supremo M Karunanidhi for a blazing political career but the script went awry in a rare case of a former Union minister having to undergo the ignominy of arrest consumed by the 2G spectrum scam.

A prominent Dalit face of the DMK, 47-year-old Raja had come a long way from being a lawyer and a block-level leader in rural Tamil Nadu to Union minister of state and finally a cabinet minister before he was forced to quit last November.

The end of his stint as Union telecom minister mired in a huge controversy came in a brutal rush after days of stalemate and now his arrest comes at a critical time for the DMK ahead of the assembly elections in Tamil Nadu.

At 35, Raja got an early break in politics 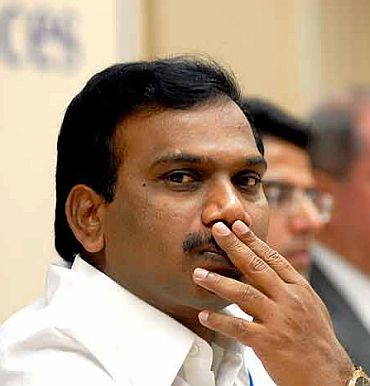 The Dalit factor helped Raja get early breaks in his political career, like becoming a Union minister at the age of 35 in the National Democratic Alliance government in 1999. And he never looked back holding several portfolios both in the NDA and United Progressive Alliance regimes at the Centre.

He became telecom minister in May 2007. And again in 2009, despite 2G scam allegations and the high-profile Dayanidhi Maran being in the race for the post, for being a rare Dalit DMK leader and for his loyalty to M Karunanidhi, who too is a poet and writer himself.

Raja's choice for the high-profile telecom ministry surprised many in the political corridors in Delhi, but Karunanidhi and his DMK stood by him all along despite widespread allegations against him over his involvement in alleged irregularities in the 2G spectrum allocation.

Raja's literary skills got him close to Karunanidhi 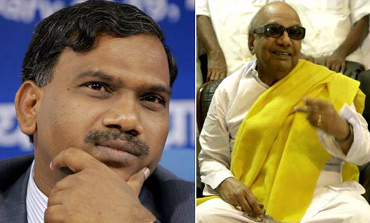 Raja was born on May 10, 1963 in Perambalur in Tamil Nadu and often likes to reminisce that he had to go to Trichy for an education as there were no facilities nearer home. In Trichy, Raja got a BSc and then his law degrees. He was a student leader of the Dravidar Kazhagam, the parent body of the DMK.

As an interesting aside, Raja writes poetry in Tamil. His literary skills are believed to have got him close to Karunanidhi. 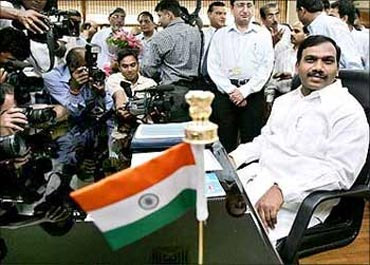 Raja was a student leader of the Dravidar Kazhagam, the parent body of the DMK. From a block level leader he rose quickly and was first elected to the Lok Sabha in 1996.

He earlier represented Perambalur and now represents the Nilgiris constituency in Tamil Nadu and this is his fourth term in Parliament after being re-elected in 2009.

His catchphrase in that election campaign was "Oru kilo arisi oru rupa, oru hello 50 paisa" (One kg rice one rupee, a hello on the phone 50 paisa).

I brought revolution in the telecom sector: Raja 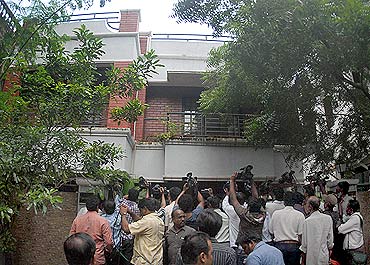 Image: Television cameramen fight for space outside the residence of Sadiq Basha, an associate of A Raja
Photographs: Babu/Reuters

When he resigned on November 14, Raja again said, "I brought revolution in the telecom sector." But his bid to take credit has been neutralised by the controversial 2G spectrum allocation.

Raja hit headlines for the wrong reasons ever since he allocated license for the 2G bandwidth in 2007 soon after he took over the coveted portfolio.

Raja has been facing criticism after he decided in 2007 to bring in new players and give licenses and spectrum as per the existing policy of "first-cum-first-serve" basis and rejected demands for auctioning.

After the licenses were given January  2008 at 2001 prices of Rs 1,658 crore, two of the telecom operators who got spectrum sold part of the equity at much higher premium. This led to controversy as it was felt that the spectrum allocation had led to a huge loss to public exchequer. 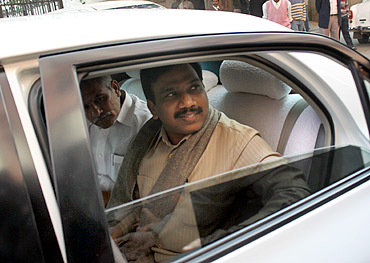 The CAG has put the loss at Rs. 1.4 lakh crore on the basis of new licences of 2008 and Rs 36,000 crore on giving licenses to existing operators for giving additional spectrum beyond contractual limit of 6.2 Mhz.

But according to a report in The Economic Times, the 2G spectrum scam resulted in a loss of about Rs 170,000 crore.
Raja had been pleading innocence ever since he was targetted by the Opposition and has been maintaining that he had just followed the procedures laid down by his predecessors.