The mining scam that ROCKED Karnataka In the second part of this two-part series, Rediff.com's Vicky Nanjappa takes a closer look at this poison, which spread across small mining towns of Karnataka, unchecked and unbridled, before it was brought to a grinding halt last year.

Part I: The DESPICABLE illegal mining HORROR of India

Former Karnataka minister Janardhana Reddy has humble origins, the son of a police officer in Karnataka's mining town of Bellary. But by 2008 he had risen to become one of Karnataka's most important political powerbrokers who has allegedly been deeply involved in illegal mining.

Reddy allegedly went to extraordinary lengths to dominate the Bellary region's booming iron mining industry. The potential profits were enormous -- prices skyrocketed from roughly US$40 per tonne in 2004 to $135 per tonne in 2011.

A broader collapse of governance

Sensing the governance vacuum that had emerged, illegal miners swooped in to join the plunder of iron resources around Bellary, Sandur, and nearby communities. Many launched small, short-term operations that were entirely illegal but which were left untouched by local authorities.

Some farmers made what seemed to them like small fortunes overnight for simply walking away while their fields were illegally torn up and stripped of iron.

We interviewed a farmer who had accepted a large cash payment (Rs 3 lakh, or $6,600) in return for vacating his iron-rich farmland while a team of laborers stripped it of ore. "It was illegal," he cheerfully admitted.

"Twenty or 30 laborers removed all of the ore within one year." He identified the man who paid him only as 'a businessman' from Bellary.

This situation spun out of control. Government officials allegedly gave out stacks of blank transit permits to miners -- enabling them to transport unlimited quantities of ore for foreign export without reporting or paying royalties on it.

Politicians and public servants began writing 'letters of recommendation' asking regulatory officials to treat particular miners with leniency or favor. In one of the Karnataka scandal's most sensational twists, several thousand tonne of iron ore that had been impounded at the port of Bellikiri for lack of proper documentation simply vanished in 2010.

Everyone is involved in this big mafia: Hegde 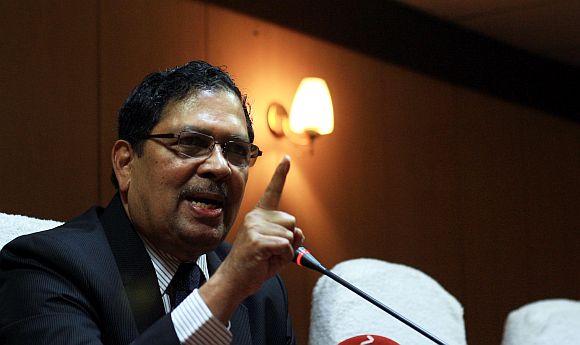 The scale and pace of illegal mining activities that consumed Karnataka through the end of 2011 may be unparalleled in India. This level of illegality would not have been possible without the acquiescence or participation of key government officials.

Their complaints mirror the human rights impacts of irresponsible mining operations in Goa and elsewhere in India.

HRW interviewed residents in the town of Sandur who alleged that rampant illegal mining had destroyed groundwater supplies and contaminated surface water.

A 2007 report prepared by India's Central Pollution Control Board noted, "The main cause of water pollution (in the Bellary-Hospet-Sandur area) during the short span of the rain season is due to wash off from the (mine) waste dumps. Due to unplanned dumping...(mine waste) gets deposited along the down slopes, stream courses, agricultural fields and ultimately reaches the tanks and reservoirs."

Crops around Bellary, Sandur and other communities were allegedly damaged or destroyed by massively overloaded ore trucks. The HRW witnessed lines of trucks several kilometers long bumping along roads that had been largely destroyed by heavy traffic, many partially uncovered and generating clouds of red iron-rich dust as they went.

Fields of cotton -- a backbone of Bellary's economy prior to the iron ore boom --were rendered worthless after being covered in thick coats of red iron ore dust. Other farmers complained that crops died for lack of water when sources were polluted or destroyed.

K'taka lost a lot of revenue to the rampant mining 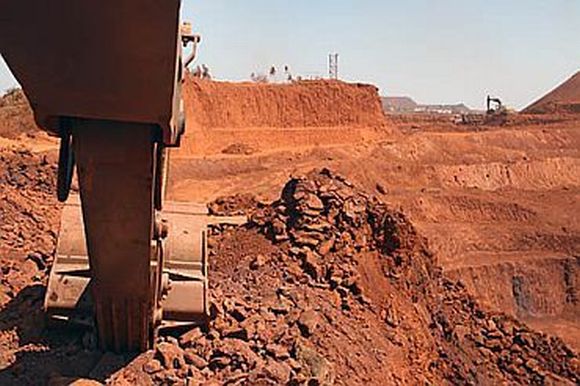 Many of the residents of Sandur taluk (district) interviewed by the HRW also believed that clouds of ore-laden dust had led to an increase in respiratory problems, but had no way of proving such assertions.

One Karnataka mining executive estimated that some Rs 13,500 to 22,500 crore ($3 to 5 billion) worth of iron ore was illegally mined and sold without any royalty or tax being paid to the government during the illegal mining boom around Bellary.

By comparison, Karnataka budgeted just Rs 10,500 crore on education and an even lower Rs 2,600 crore on health services in the Indian financial year 2010.

Karnataka also faces considerable shortfalls in staffing for doctors and other health workers.  A study by Columbia University's Earth Institute found that Karnataka required an additional Rs 320 crore ($70 million) in annual public investment to scale up primary education in rural areas -- a small fraction of the amount of revenue believed lost to illegal mining.

From impunity to accountability

Former Karnataka Minister Janardhana Reddy flaunted his wealth, building a veritable palace with an indoor pool and helipad that he proudly displayed to visiting journalists. He bought and donated a diamond-studded crown worth an estimated Rs 45 crore ($10 million) to a temple in Andhra Pradesh.

These brazen displays of wealth seemed to court accountability but for several years, his impunity seemed ironclad.

Reddy's prosecution is important -- not least because it shows that accountability is possible even for the powerful. It is not enough in and of itself, however.

As of March 2012, mining operations around Bellary remained shuttered pursuant to a Supreme Court order barring ore exports from the state, and it was not clear when production might be allowed to resume.

Thousands of households who had depended on the mines for their livelihood were out of work and local steel refineries were starved of raw materials. Karnataka's predicament triggered panic among some industry officials in neighboring Goa, where a new scandal began brewing in 2011. 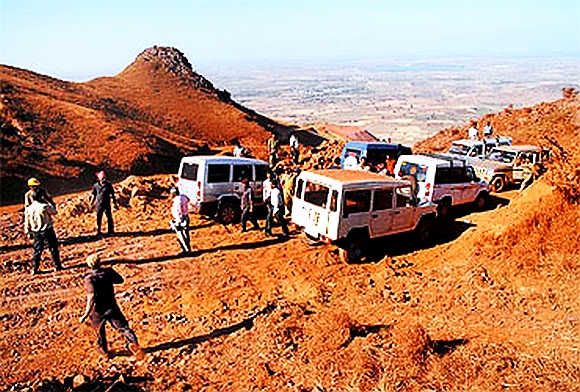 End the practice of requiring mining firms to select and pay the consultants who carry out their Environmental Impact Assessment reports. Assessments could be funded through a general fund paid for by mining firms but under government control.

Empower the Expert Appraisal Committees to carry out a more thorough review of the potential negative impacts of proposed new mining projects, including through frequent site visits. This will require substantial additional staffing and other resources as well as a slower rate of project consideration and approval.

Draft rules requiring a more thorough and detailed consideration of the results of any mandatory public consultations required by the approvals process for a new project.

Initiate an independent review of the Environmental Impact Assessment reports underpinning all existing mines, with a view to determining how many of them are based on materially false or misleading data.

No regulation leads to corruption 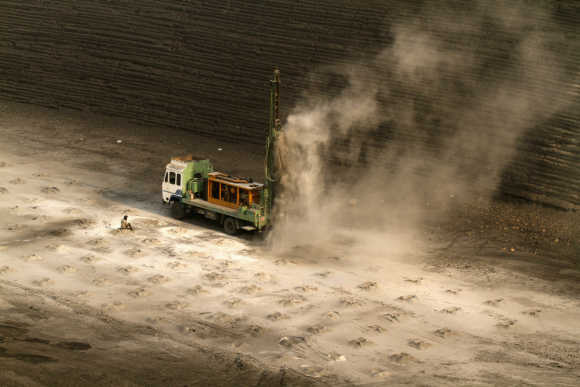 Image: A worker sits near a drilling machine at a coal mine in the Mahanadi coal fields at Dera near Talcher town in Orissa

Empower and instruct the ministry of environment and forests to carry out more thorough and proactive monitoring and oversight of existing mining projects, including by providing the staff and other resources necessary to fulfill this role effectively.

Explore ways to ensure that institutions accredited to carry out Environmental Impact Assessments are also well trained in human rights principles and in global best practices for human rights impact assessments in the mining sector.

Why Karnataka and Goa? Meenakshi Ganguly tells rediff.com that they looked into the regulation of mining which was not present. What we want to say is that if there is no regulation it does lead to corruption.

"On one hand we speak of growth, and on the other hand, these belts in question comprise the poorest of people," she says.

"The reason we went into the illegal mining Karnataka and Goa is because the corruption had already been exposed. Corruption was already a known fact and hence we looked into it," she adds.

"We also decided to launch the report in Goa because there is a new government in place and the government came to power on the sole promise that these issues would be addressed. We want these two states to act on these reports and set an example for the other states which also have this problem of illegal mining," she says.

"Let us see how it goes and depending on that we will look at other states such as Rajasthan as well," she signs off.