The breathtaking colours of Himalayas 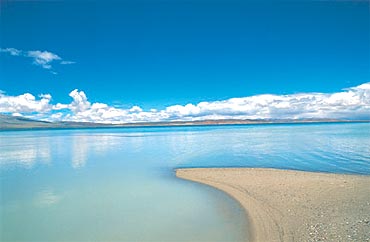 Sanchari Bhattacharya meets a couple of mountaineering enthusiasts who seek the thrill of a grand Himalayan adventure, every year.

Divyesh and Vineeta Muni, a married couple and dedicated mountaineers from Mumbai, have made nearly 50 treks to the nooks and corners of the Himalayas in the last 30 years.

From Arunachal Pradesh to Garhwal in Uttaranchal, they have crisscrossed many of its treacherous terrains. Their array of vivid photographs -- taken at some of the most breathtaking (literally and otherwise) spots on earth -- tells the story of the couple's three-decade-old relationship with the mountain range.

'A lifetime is not enough to experience the Himalayas' 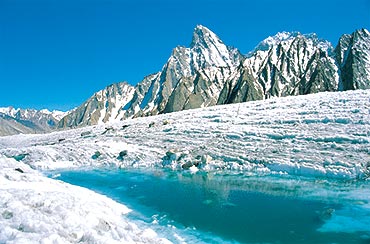 The unparalleled grandeur of the Himalayas compels the Munis to take some time off every year to visit their favourite haunt.

"People often ask us, 'Don't you want to see the Andes (mountain range in South America) or the Alps (mountain range in Europe)?' We tell them, 'A lifetime is not enough to experience the Himalayas. And it is right in our background'," says Divyesh.

'These colours are real' 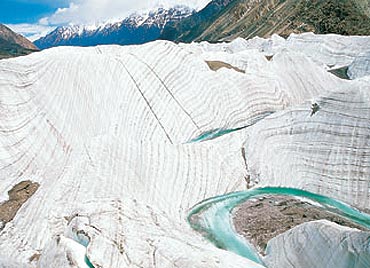 He adds that people often don't appreciate the myriad beauty of the world's highest mountain range.

"People think of Himalayas as one single entity, but it has so much variety to offer. While Kumaon is lushly green, Ladakh has its own stark appeal. Each region has a different culture, colour, attire and architecture,"  says Divyesh.

Pointing out the flamboyant blue, green and turquoise in the photographs, he says, "These colours are real. No Photoshop and no filter has been used. These are the colours you see there. When you climb so high, even the clouds are below you."

'Himalayas have so much variety to offer' 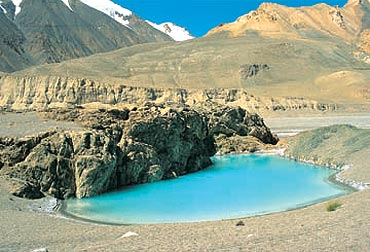 Vineeta, an avid nature lover, trekked across the entire length of the Himalayas in 1997, covering 4,500 km in a little over six and a half months.

The photographs are her way of passing on a precious legacy to the next generation, most of whom are unaware about the slow erosion of Himalayan glaciers.

'See how beautiful it is' 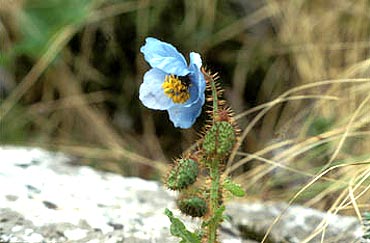 Image: A blue poppy flower at Garhwal in Uttaranchal

"This is what we are losing. We need to show this (to the younger generation) and tell them, see how beautiful it is. We need to preserve its beauty, we need to protect it," she says.

But the serene beauty of the Himalayas turned ferocious during their expedition to Ladakh's Neemaling Valley in August, 2010. The Munis were among a group of mountaineers who were trekking up the valley when thunder and lightening lit up the sky. 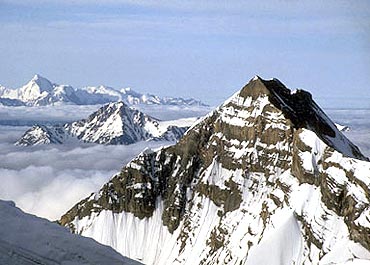 Image: Rising above the clouds

The couple, who had experienced thunderstorms during their earlier treks, could sense that nature's fury had taken on more sinister undertones.

The night passed and the group continued on their trek. It was not until they had made their way back to Ladakh Valley that they realised the enormity of that night's disturbance.

A cloudburst had resulted in freak floods and massive mudslides which had flattened large parts of the picturesque valley.

'Everything had fallen apart' 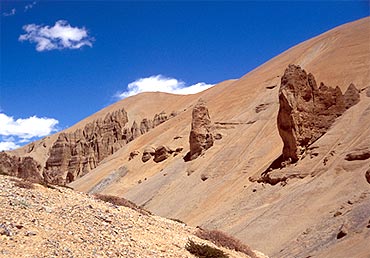 "The extent of devastation was unbelievable. Everything had fallen apart. Entire villages had been swept away. Cars had landed in the middle of Indus river. We had to take an alternate route back as the Leh-Manali Highway had been washed away," remembers Vineeta.

Moved by the devastation wrought by the disaster, the couple, along with the Himalayan Club -- an 83-year-old organisation comprising aficionados of the mountain range -- started Rebuild Ladakh, an initiative to help the locals put together their shattered lives.

'Relief work is tougher at that altitude' 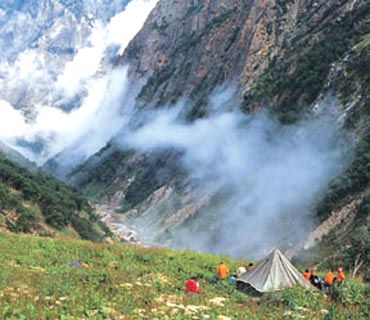 The initiative seeks to help the traumaitised locals come to terms with the impact of the disaster and find ways to deal with it. Rebuild Ladakh is involved in multiple projects to rehabilitate locals, especially those who live in remote villages tucked deep inside the valley.

"The government has done its best, but relief work is tougher at that altitude. The focus has been on Leh. Nobody has reached out to the remote villages," says Vineeta. 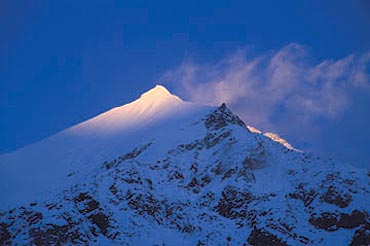 One of the project's missions is to train farmers -- whose lands have been destroyed by impenetrable layers of mud -- to embrace alternate occupations like home-stay tourism.

After building winter shelters for those who lost their homes during the disaster, Rebuild Ladakh now aims to reconstruct their houses once summer sets in.

The Himalayan Club is also trying to garner funds to rebuild a students' hostel that was completely destroyed. The hostel housed children, mostly from poor families, who had come from faraway corners of Ladakh to receive an education. 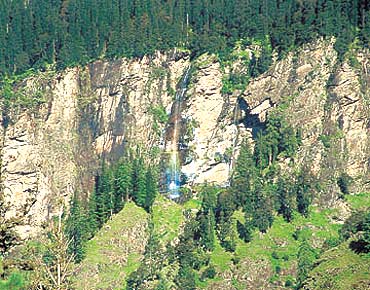 Image: A rainbow in the mountains of Himachal Pradesh

The Munis hope that the exhibition of their photographs, which is currently going on at a gallery in south Mumbai, will raise funds for the project and help provide a roof over the heads of these students.

The couple is also hopeful that the photographs -- many of them a testament to the mesmerising appeal of Ladakh -- will encourage people to visit the region.

"People think Ladakh has been damaged by the incident, but that's not true. Ladakh needs tourists more than ever now to keep it going," says Divyesh.

'Everyday has a new view for you' 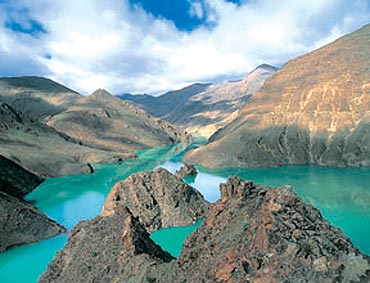 The Ladakh disaster may have warned the couple about the unpredictability of their treks, but they are determined to continue their work in the valley and go on with their expeditions to the heart of the Himalayas.

Divyesh sums up why they keep on going back, year after year, to the Himalayas, "Everyday has a new view for you and you think 'wow, this is it'. And next time, it offers you something even better!"

Himalayan Mystique is on till March 20 at Piramal Gallery, NCPA, Nariman Point, Mumbai.

For more information on Rebuild Ladakh, log on to www.rebuildladakh.org