A shocking incident of misuse of power has come to light in national capital New Delhi where 11 Shiv Sena Members of Parliament are reported to have forced a Muslim worker to break his Ramzan fast and eat a chapati, at the Maharashtra Sadan.

The MPs were apparently dissatisfied by the fact that they had not been served Maharashtrian food.

Soon after the incident, Shankar Malhotra, deputy general manager of the Indian Railway Catering and Tourism, which handles subsidiary catering for Maharashtra Sadan, shot off a letter to Maharashtra resident commissioner Bipin Mallick.

In the letter, Malhotra wrote, “All the guests along with media reporters and staffs of Maharashtra Sadan got into kitchen where I was getting the orders prepared. They caught me and put the chapati into my mouth. I was wearing a formal uniform set as prescribed by IRCTC and everybody in the panel also knew my name as ‘Arshad’ as I was wearing the name tag. Even then they inserted chapati in my mouth which caused my fast to break on the eve of Ramzan. I was hurt with the thing they have done as religious sentiments are concerned.” 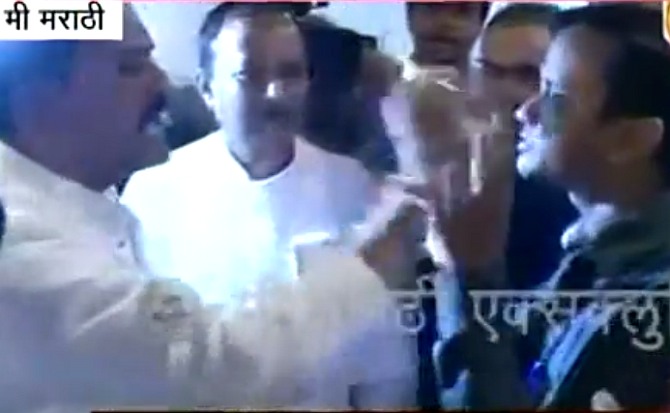 IRCTC has since suspended all operations in protest against the incident.

Protests over the issue echoed in Parliament as well where several Opposition members raised the issue and termed it as violation of religious beliefs.

But government dismissed the allegations as "unsubstantiated" and said they need to be verified first lest they raise communal passions.

The issue was raised in both Lok Sabha and Rajya Sabha by opposition members who demanded action against the Shiv Sena MPs who vociferously denied the reports.

After uproar by opposition, the Lok Sabha and Rajya Sabha witnessed brief adjournments as agitated members wanted to raise the issue which was staunchly opposed by the Shiv Sena. The Lok Sabha also witnessed a walkout by the Congress, Nationalist Congress Party, Left, Peoples Democratic Party and All India Majlis-e-Ittehad-ul Muslimeen.

The Lok Sabha witnessed a storm as a BJP member Ramesh Biduri rushed to the well telling some in the opposition that "this is India. Those...go out".

"We are dealing with a sensitive issue... Don't try to raise communal passions. Nobody knows the truth. Whether the incident has happened or not, we are not sure," Naidu said seeking to douse flared passions.

He said the government is in no way connected with the "unsavoury" incident. "We need to enquire...Let us not send wrong signals to the country."

Raising the issue during Zero Hour, Congress member M I Shanavas described the incident as "shocking" and said it is "cutting at the root of secularism. MPs who should be role models have become bad models...The faith of minorities has been tarnished. The House should condemn it."

He also quoted reported statements made by the concerned employee Arshad.

Defending the Shiv Sena MPs, Union Minister Anant Geete said, "Those who want to respect the month of Ramzan should not make false statement in the House" triggering sharp protests from the Opposition.

"Whatever the report has appeared is totally false and Congress is trying to tarnish the image of the Narendra Modi government," Geete said.

In the Rajya Sabha, Minister of State for Parliamentary Affairs Prakash Javadekar said "It is an unsubstantiated report. We should not take it to the next level. Let it be ascertained. There are sensitivities involved."