The Secret of the Nobel Prize dinner 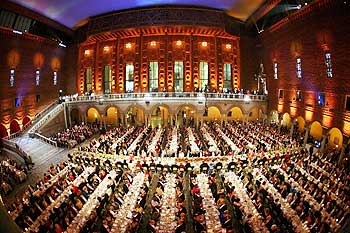 Image: A view of the Gallery of Karl XI during the gala dinner for 2008 Nobel laureates at the Royal Palace in Stockholm
Photographs: Fredrik Sandberg/Scanpix Sweden/Reuters

A lavish ceremonial dinner will crown an evening of celebrations for Venkatraman Ramakrishnan and the 12 other Nobel Prize winners on Thursday at the Stokholm City Hall where they will receive their medallion and be toasted for their extraordinary accomplishment.

Many exemplars, who have themselves been the toast at the table in the past, describe it as a grand affair. R K Pachauri, who received the Nobel Peace Prize on behalf of the Intergovernmental Panel on Climate Change with former United States Vice President Al Gore last year, calls it 'an event of a lifetime'.

"The menu will only be known at 7 pm Swedish time," says Mark Phoenix, who is part of the team of 40 chefs who prepare the dinner assisted by a team of over 200 waiters.

'The kitchen begins preparing the meal four days before' 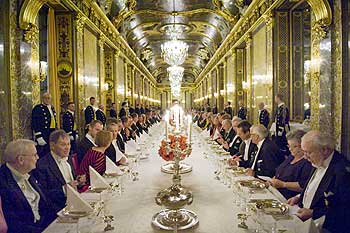 Image: A file photograph of the Nobel Banquet
Photographs: Reuters

"The kitchen begins preparing the meal four days before it is served," says Fredrick Forsell, who has been assisting Phoneix as sous chef for the last couple of years.

Even the Swedish Ambassador to India, Lars-Olof Lindgren, does not want to talk about the menu, though he was more than delighted to lay out last year's menu for India's who's who during the Sweden India Nobel memorial week held in the country recently.

The menu comprised a starter of baked sole with Swedish shellfish, followed by a main course of veal with Kark Johan mushrooms, celery creme, and potato terrine.

For dessert, guests were treated to 'Poire belle Helene', a French dessert consisting of ginger and vanilla poached pear on a bed of chocolate glazed almonds.

A meal worth five million kronor! 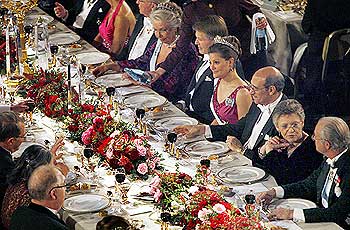 Image: Guests and honourees join the Swedish royal family at the 2008 Nobel banquet in the Blue Hall
Photographs: Bob Strong/Reuters

"Last year, the dinner was elegant and lavish. There were some great performances and wonderful concerts. The hall was packed with thousands of people," Pachauri says of his experience.

The menu for the big evening is planned months in advance with hundreds of people working to prepare large amounts of food. In September each year, three menus suggested by selected chefs with impeccable international credentials are presented to the Nobel Foundation for tasting and testing.

The menu for the first Nobel Banquet cost 15 Swedish kronor (approximately $200 dollars today). "Today the cost of the meal works out to five million kronor," calculates Phoenix, who has been serving the Nobel dinner for the past four years.

The shopping list for a Nobel dinner during a particular year included 2,692 pigeon breasts, 475 lobster tails, 100 kilos of potatoes, 70 litres of sweet-and-sour raspberry vinegar sauce, 67 kilos of Jerusalem artichokes among others on the long list.

23,000 flowers are used as decorations 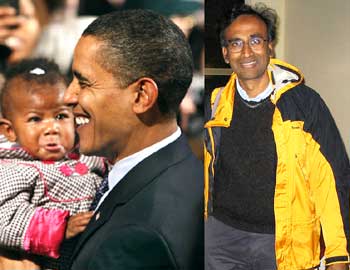 At one banquet, 20 chefs and 200 waiters worked to lay more than 60 tables at the royal banquet in the Blue Room of Stockholm City Hall. The Hall itself was festively decorated with 7,000 pieces of porcelain, 5,000 glasses and 10,000 pieces of silverware.

"Last year, we managed to finish serving in 8 minutes 21 seconds and the food was still piping hot," says Phoenix.

"It is a sit-down three course dinner. The traditional dinner, which began first in 1901, was initially a six-course one and for the past 11 years, it has been a three-course affair," says Phoneix.

The flowers that go into the decorations are an annual gift from the Italian city of San Remo, where Alfred Nobel died in 1896. Every year, more than 23,000 flowers are used as decorations for the Nobel festivities.

When the Nobel banquet was cancelled 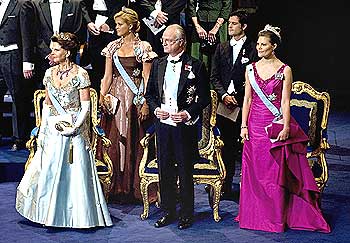 Last year, the City Hall was decorated in red. Nearly 10,000 flowers and 6,000 leaves were used, including  carnations, roses, hortensias, lilies, tulips and amaryllises.

Each prizewinner is entitled to bring along 16 guests. Sweden's royal family always participates, and so do the prime minister and other members of the government. The Nobel family is always represented as well.

Incidentally, in 1979, the Nobel banquet was cancelled in Oslo because Mother Teresa refused to attend it, saying the money would be better spent on the poor.