Sign in  |  Create a Rediffmail account
Rediff.com  » News » 'There was no need for police to open fire'

'There was no need for police to open fire' 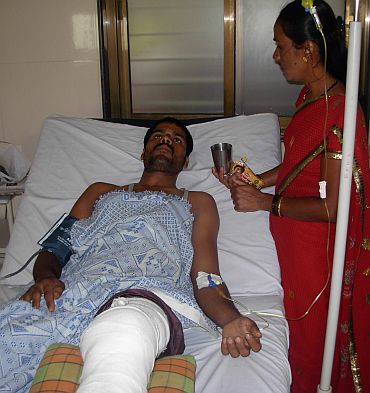 Image: Ajit Chowdhary
N Ganesh in Mumbai
Bullets don't seem to have dented the intent of residents of Maval taluka, protesting against land acquisition. In fact, the killing of four of their fellow agitationists in the police action has only made their resolve stronger. N Ganesh reports

Twenty-four-year-old Ajit Chowdhary grimaces in pain as the medical staff adjusts his plastered leg at the Intensive Care Unit of Talegaon General Hospital in Maval taluka of Pune.

Chowdhary, a resident of Sadavli village in Maval taluka, was shot by the police in a bid to disperse the thousand-odd farmers who had blocked the Mumbai-Pune Expressway on Tuesday morning.

Chowdhary was fortunate that he was hit on his leg, unlike the three others of Maval taluka whose vital organs were damaged by the bullets and they succumbed to their injuries.

The farmers were protesting against land acquisition for the water supply project to the urban areas of Pimpri-Chinchwad. 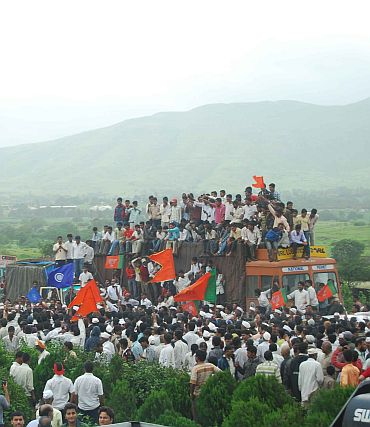 The fact that the project envisages tapping water at its source at the Pawana dam is also being objected by the farmers on the grounds that it would leave very little water for irrigation of 15,000 acres on which 75 villages are dependent for their livelihood.

Despite the police action, which has been condemned by one and all, the morale of the villagers does not seem to have waned a bit as they threaten to intensify their stir against the water supply project for Pune.

"It would have made no difference to me even if the bullet had hit me here," said Chowdhary pointing to his chest.

This is the same remark that he claims he had given to deputy chief minister Ajit Pawar when he sneaked into Maval taluka early in the morning to access the situation and meet the injured.

'Pawar is using all his might to crush the agitation' 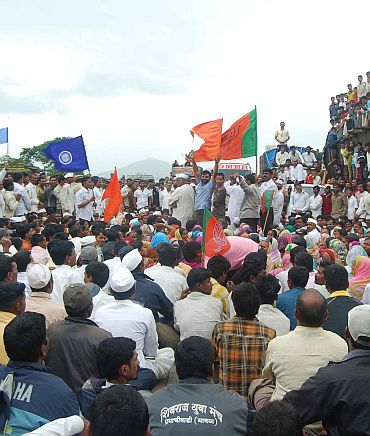 Image: The protest at the Expressway

He said that his family owns of about 3-4 acres of land and there are four brothers. If government forcibly acquires their land for the water supply project, then he and his brothers would have nothing to survive on.

The injured protestors and villagers this reporter spoke to put the blame squarely on Pawar for the death of three farmers.

"Under the guise of taking the water to Pimpri-Chinchwad where presently there is no paucity, Mr Pawar intends to take the water to Baramati which is facing a drinking water shortage due to its water being contaminated. Hence, he is using all the might of the state administration to crush the agitation," said Shivaji Adhalrao Patil, BJP MP from nearby Shirur Constituency. 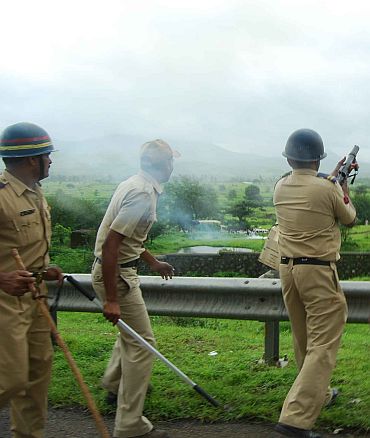 MP Patil accused the police of firing at protestors who were on the retreat. What MP Patil alleged has been corroborated by those injured in the police firing.

"Many like me were shot from behind when we were dispersing after being lathi-charged. There was no need for the police to have resorted to firing. Even the women were not spared," said Ganesh Taras (25) who was shot in his leg.

According to Prasad Bagwe, coordinator of National Alliance for People's Movement (organisation of Medha Patkar), majority of the farmers in Maval taluka have been project affected persons at some point or other.

The farmers' woes began with the Pawana dam project whose land acquisitions began in 1960 and the actual construction of the dam commenced in 1971. Unfortunately, legislation for the resettlement of the project-affected persons was brought into force in 1976 by Maharashtra.

"As a result, the question of about 800 project-affected persons of Pawane dam is still in a state of limbo," said Bagwe.
He said that the Maval taluka has 10 dams, five of which have been constructed by Tatas for power generation.

Voters of Maval have chosen BJP candidates over NCP

"Along with the dams came the railway lines, defence projects -- INS Shivaji, cantonment, MIDC, Expressway and now the highway. As each new project was being undertaken, it would leave behind a trail of project-affected persons -- farmers who lost their land for the collective good," said Bagwe.

The growing resentment among the farmers of Maval has reflected in the assembly elections in the last two decades.

The voters of Maval have chosen BJP candidates over the Nationalist Congress Party despite Pawar having a stronghold in nearby regions of Pune.

"Pawar is turning a blind eye to the fact that 72 of the 75 gram panchayats had unanimously opposed against the project. The villagers are not against water being taken from Pawane river to Pimpri-Chinchwad. They are against the plan to lay two pipes each with diameter of 6 feet that would draw about 6.5 TMC (thousand million cubic feet of water out of Pawane dam from the reservoir with a holding capacity of 10.5 TMC and take it to the urban areas in Pimpri-Chinchwad," said MP Patil.