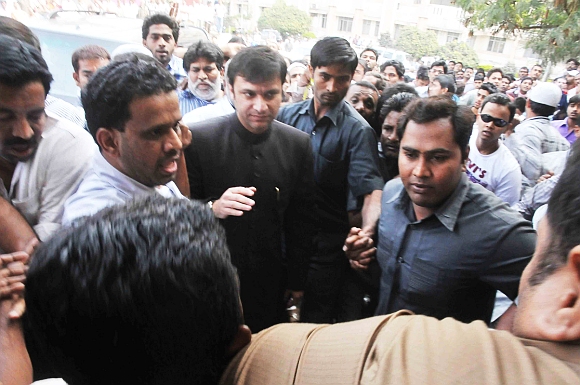 Amid high drama, Majlis-e-Ittehadul Muslimeen Member of Legislative Assembly Akbaruddin Owaisi, who is facing multiple cases for his alleged 'hate speech', was on Tuesday arrested after medical tests in a government hospital here a day after his arrival from London.

Owaisi, who was subjected to medical examination at the Gandhi Hospital here in Hyderabad his fitness status, was straightaway taken under high security in a convoy of cars to Nirmal in Adilabad district, more than 200 km from Hyderabad.

Security was also tightened along the route to Nirmal in the Telangana region of the state. Fourty-two-year-old Owaisi, the floor leader of his party in the Andhra Pradesh  assembly, is expected to be produced before a court in Nirmal in connection with the registration of a case against him for alleged provocative speeches regarding the disputed Bhagyalakshmi shrine in the Charminar area. 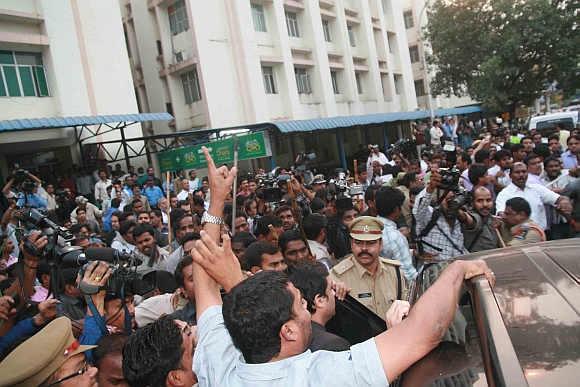 Complaints have been filed against him in regard to the same speeches in various police stations in Hyderabad and other parts of the state.

On medical grounds, Owaisi had sought four days time to appear before the police which had booked him under various sections of the Indian Penal Code in Nizamabad and Osmania University police for the alleged 'hate speeches'.

As he failed to appear before the police, the Investigating Officer of Nirmal (rural) police A Raghu visited Owaisi's house in Banjara Hills on Monday evening and found that he looked fit to face questioning, according to police sources. 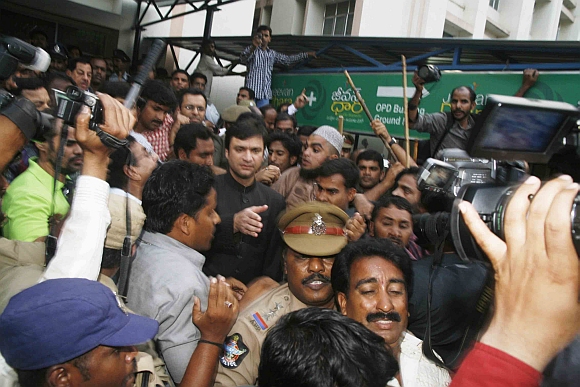 However, Owaisi complained of 'internal pain'. The police took him to Gandhi hospital and was subjected to medical examination by government doctors at Gandhi Hospital on Tuesday.

After getting the medical report, the police arrested him. As the news of his arrest spread, hundreds of MIM party workers and his supporters gathered in front of Gandhi Hospital. The police had a tough time in controlling the protesters and preventing them from gatecrashing into the hospital.

The police have already intensified security arrangements in the city, particularly in Old City -- a stronghold of MIM Party, by deploying additional forces as a precautionary measure. 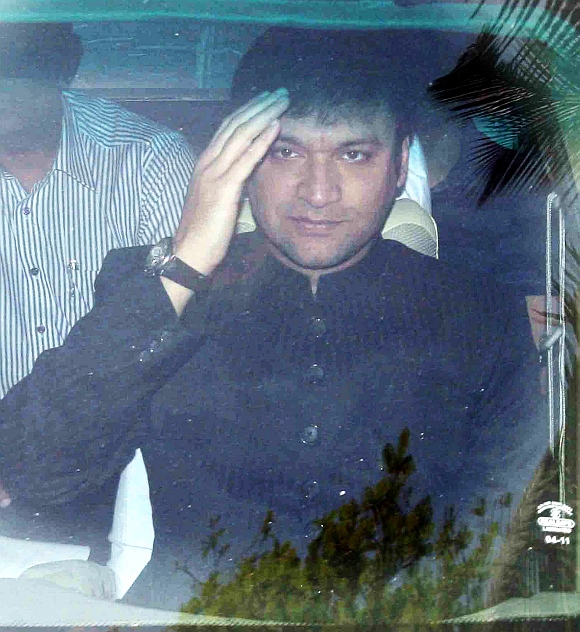 As news of his arrest spread, hundreds of MIM workers and his supporters gathered in front of Gandhi Hospital. The police had a tough time in controlling the protesters and preventing them from gatecrashing into the hospital.

The police intensified security arrangements in the city, particularly in Old City -- a stronghold of MIM Party, by deploying additional forces as a precautionary measure.

Earlier in the day, a police escort team reached the MLA's house at Banjara Hills and took him to Gandhi Hospital after the Nirmal rural police issued a notice to Akbaruddin to make himself present for the medical examination.

Akbaruddin has already been issued notices to appear before the Nizamabad police on Tuesday and also before the Osmania University police on January 10 in connection with the further probe into the cases registered against him. Owaisi has approached the Andhra Pradesh high court seeking to quash all the first information reports registered against him at different police stations in the state. 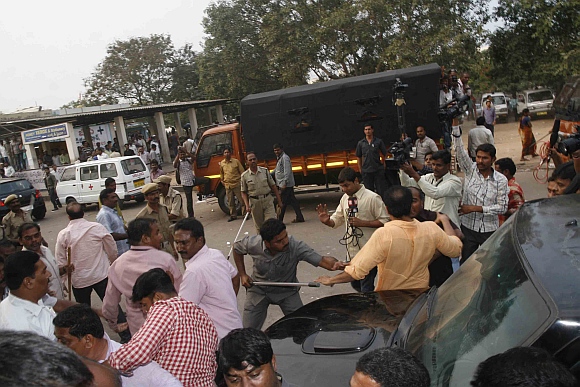 Tension prevailed outside the hospital as scores of supporters of Owaisi assembled near the premises and raised anti-government slogans. Additional security forces were also deployed in parts of the old city as a precautionary measure following speculation that Owaisi would be arrested after his medical tests.

Gandhi Hospital Superintendent Dr S Mahbub said that the medical examination of Akbaruddin was conducted by a team of five doctors.

"A bullet is there on the lower side of his back," he medical superintendent said. A rival group had attacked Akbaruddin in April 2011 over a land dispute issue in Barkas area here. He had sustained bullet injuries in the attack.

Meanwhile, protests and demonstrations continued by Bharatiya Janata Party workers and VHP members at Indira Park and Alwal and in Adilabad and Nizamabad districts demanding immediate arrest of Owaisi.