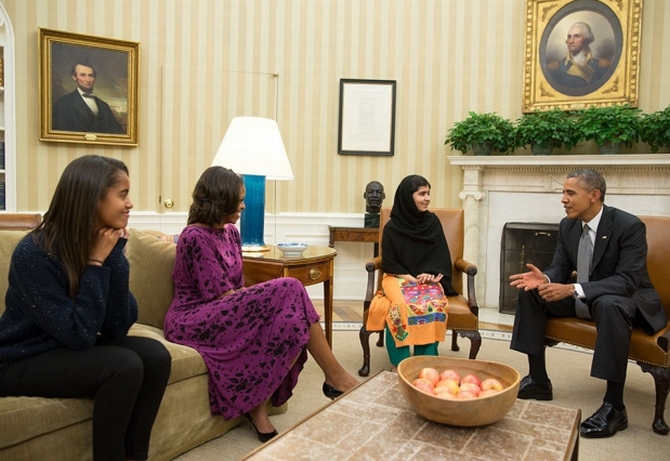 Image: President Barack Obama, First Lady Michelle Obama, and their daughter Malia meet with Malala Yousafzai, the young Pakistani schoolgirl who was shot in the head by the Taliban a year ago, in the Oval Office
Photographs: Pete Souza/Official White House Photo

"President Barack Obama and First Lady Michelle Obama welcomed Malala Yousafzai to the Oval Office to thank her for her inspiring and passionate work on behalf of girls education in Pakistan," the White House said after the meeting on Friday.

The US joins with the Pakistani people and so many around the world to celebrate Malala's courage and her determination to promote the right of all girls to attend school and realise their dreams, the White House said.

"As the First Lady has said, 'Investing in girls' education is the very best thing we can do, not just for our daughters and granddaughters, but for their families, their communities, and their countries," it added.

"As Obama said in his proclamation to mark today as the International Day of the Girl, 'Across the globe there are girls who will one day lead nations, if only we afford them the chance to choose their own destinies'," the White House added.

"And on every continent, there are girls who will go on to change the world in ways we can only imagine, if only we allow them the freedom to dream. We salute Malala's efforts to help make these dreams come true," the White House said.

Malala, 16, was among the favourites to win this year's Nobel Peace Prize for her bold campaign for girls' right to education in Pakistan, which went to the Organisation for the Prohibition of Chemical Weapons, a United Nations-backed chemical weapons watchdog which came into prominence after the Syria crisis.

The young activist emerged as a contender after continuing her work to promote better rights for girls despite being shot in the head by the Taliban.

Malala, who is now based in Birmingham, United Kingdom, was shot by the Taliban as she travelled on a school bus in the Swat Valley in October last year.