Sign in  |  Create a Rediffmail account
Rediff.com  » News » Pakistan can build up to 20 nukes in a year! 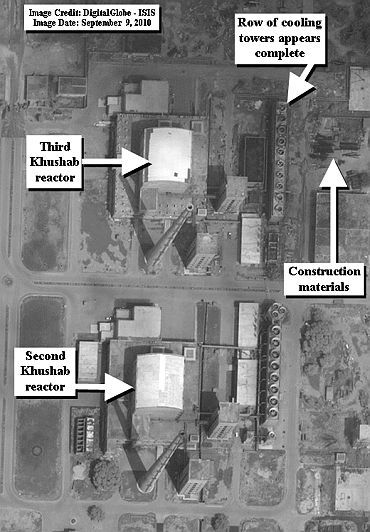 Pakistan's nuclear weapons programme is expanding at a rapid pace and the country is expected to soon have a fourth operational reactor to ramp up the production of plutonium, according to a media report.

According to new commercial satellite imagery obtained exclusively by Newsweek magazine, Pakistan is "aggressively accelerating construction" at the Khushab nuclear site, about 140 miles south of Islamabad.

The report said the fourth nuclear reactor at Khushab could come online as early as 2013.

The development comes at a time of "unprecedented misgiving between Washington and Islamabad" in the wake of the US raid that killed Osama bin Laden. 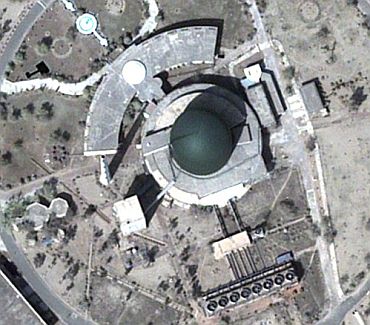 The White House declined to comment but a senior US congressional official working on nuclear issues told Newsweek that intelligence estimates suggest Pakistan has already developed enough fissile material to produce over 100 warheads and manufacture between eight and 20 weapons a year.

"There's no question it's the fastest growing programme in the world," the official said.

"The build-up is remarkable," said Paul Brannan of the Institute for Science and International Security.

"And that nobody in the US or in the Pakistani government says anything about this -- especially in this day and age -- is perplexing."

Much more than just an India, Pakistan issue 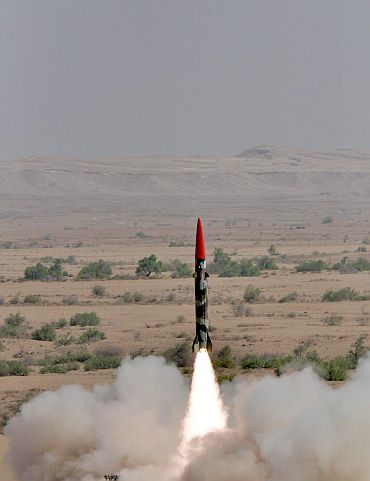 Unlike Iran, which has yet to produce highly enriched uranium, or North Korea, which has produced plutonium but lacks any real weapons capability, Pakistan is significantly ramping up its nuclear weapons programme.

Eric Edelman, under-secretary of defence in the George W Bush administration, said: "You're talking about Pakistan even potentially passing France at some point. That's extraordinary."

Pakistani officials were quoted as saying that the build-up is a "response to the threat from India, which is spending 50 billion dollars over the next five years on its military".

"But to say it's just an issue between just India and Pakistan is divorced from reality," said former senator Sam Nunn, who co-chairs the Nuclear Threat Initiative.

"The US and Soviet Union went through 40 years of the Cold War and came out every time from dangerous situations with lessons learned. Pakistan and India have gone through some dangerous times, and they have learned some lessons. But not all of them. Today, deterrence has fundamentally changed. The whole globe has a stake in this. It's extremely dangerous." 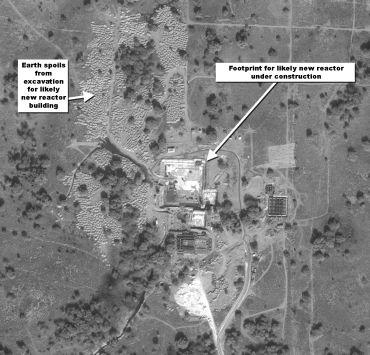 The report said it was dangerous that Pakistan is stockpiling fissile material, or bomb fuel.

"Since Islamabad can mine uranium on its own territory and has decades of enrichment know-how -- beginning with the work of nuclear scientist A Q Khan -- the potential for production is significant," the report said.

It said leaders around the world are worried about "loose nukes" -- nuclear weapons or fissile material falling into the wrong hands.

"There's no transparency in how the fissile material is handled or transported," said Mansoor Ijaz, who has played a role in back-channel diplomacy between Islamabad and New Delhi.

"And the amount -- they have significant quantities -- is what's so alarming," he said. 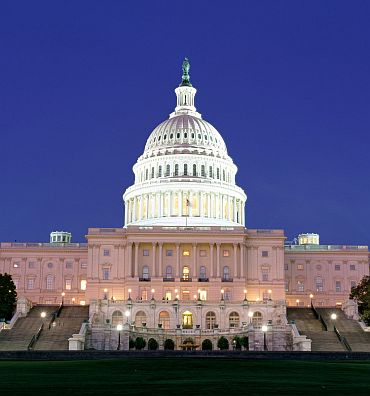 "That Osama bin Laden was found in a Pakistani military community, and that the country is home to such jihadi groups as Lashkar-e-Tayiba, only heightens concerns," the report said.

"We've looked the other way from Pakistan's growing programme for 30 years," said Sharon Squassoni, a director at the Centre for Strategic and International Studies. There could be "a disaster waiting to happen", she said.

An unnamed Defence Department official said the US government is "confident that Pakistan has taken appropriate steps toward securing its nuclear arsenal".

Few in Washington want to openly discuss the nightmare scenario of terrorists getting hold of nuclear material or weapons, the report said.

"The less that is said publicly, the better," said Stephen Hadley, national security adviser to President George W Bush. "But don't confuse the lack of public discussion for a lack of concern."

'Pakistan knows it can outstare the West' 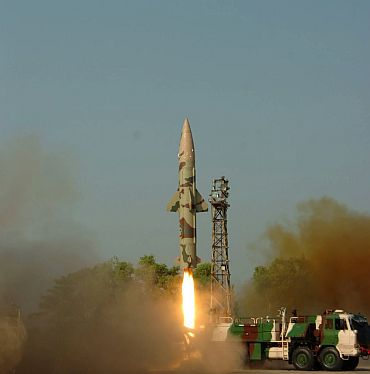 "It's confident the West knows that Pakistan's collapse is too big a price to pay, so the bailout is there in perpetuity. It's the one thing we've been successful at."

"Regretfully, there are several destabilizing developments that have taken place in recent years," Khalid Banuri of Pakistan's Strategic Plans Division, which maintains the nuclear arsenal, wrote in response to Newsweek's questions.

Among Pakistan's concerns, Banuri pointed to India's military build-up and the US's civilian nuclear deal with it.

'It is our own production. What will US do?' 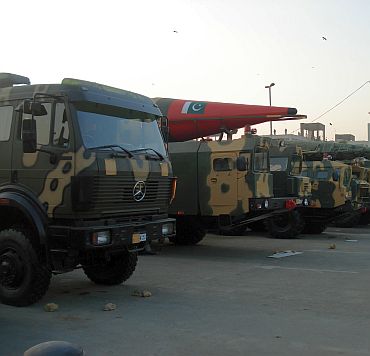 "Our programme is an issue of extreme sensitivity for every man, woman, and child in Pakistan," said former President Pervez Musharraf, adding that the nukes are "well dispersed and protected in secure locations".

Asked whether the US has a role to play in securing the arsenal, Musharraf said: "A US role to play? A US role in helping? Zero role. No, sir. It is our own production? We have not and cannot now have any intrusion by any element in the US."

To guard its strategic assets, Pakistan employs two army divisions -- about 18,000 troops -- and, as Musharraf put it: "If you want to get into a firefight with the forces guarding our strategic assets, it will be a very sad day."