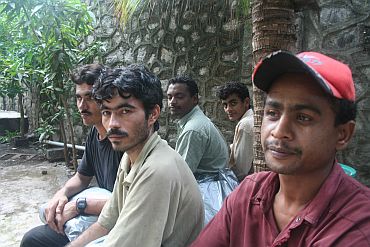 Even as the rescued Indian sailors of the MV Suez are homebound via Karachi, five Pakistani Balochi fishermen rescued by the Indian Navy are still awaiting their return home, reports Toral Varia.

They are a group of five young fishermen. 24-year-old Aurangazeb Nabi Baksh is the oldest amongst them and by way of respect his younger brother and three others call him 'captain'.

"What is sad is that no one from the Pakistan consulate even tried to get in touch with us. Not one person from their end responded to our requests. They just abandoned their own citizens. At the end of the day these fishermen are their citizens," senior police inspector Chandrakant Naik told rediff.com.

These 'prisoners' will finally be homebound soon 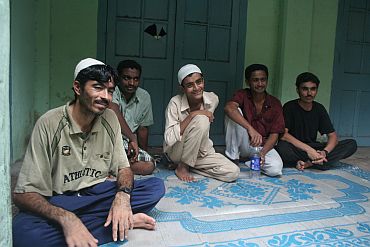 Image: The sailors during their afternoon prayers inside the Yellow Gate prison
Photographs: Uttam Ghosh/Rediff.com

After months of back and forth and several letters between the Mumbai police and the Pakistani high commission in New Delhi, finally there is some hope that the Pakistani fishermen will finally be homebound soon.

While the Pakistan high commission kept buying time claiming that verification of their documents is under process, the home ministry kept addressing the hostage fishermen as 'prisoners' creating further confusion.

But the Union home ministry on Tuesday also asked the Mumbai police to make necessary arrangements at the Yellow Gate police station for Pakistani consular officials to meet the five sailors.

'When hostages are termed prisoners, whole system works with a different attitude' 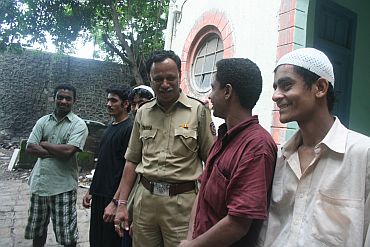 Getting the clearance from the home ministry wasn't easy, informed Abrahim Mathai, president of Harmony Foundation. After securing the release of Indian sailors from MV Suez, Pakistan human rights activist Ansar Burney sought the help of Harmony Foundation for safe and prompt return of the five Pakistani sailors.

"The home ministry kept referring to these sailors as prisoners. That was the major goof up. When innocent hostages are referred to as prisoners the whole system works with a different attitude," said Mathai.

'People in India are so friendly' 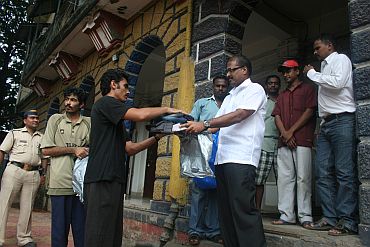 After securing necessary clearances from the home ministry, the fishermen are now awaiting the arrival of the Pakistani authorities. But as their day of departure nears, the fishermen are all praises and nostalgic about their life in the Mumbai police station.

"Whenever we were sad or longed to speak to our families, officers from the police station would make calls for us," remembered Lal Baksh.

For Farhad seeing TV was the best part of the day. "After the officers would leave we would see TV and movies with the night staff and have our dinners and lunch with them too," he added.

And for these fishermen Crawford market, Bhendi Bazaar and Taloja jail is whole of Mumbai.

A teary eyed Sajjad Ali felt sad that its time to say bye to his friends in the uniform. "We have become very attached to them. We know all the officers, who comes when, who is given what duty. They have been very warm and friendly. People in India are so friendly." 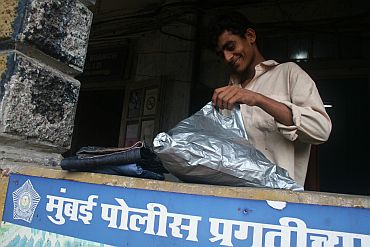 "About 7 months ago our seth deputed all five of us on MV Al Murtuza. We went fishing towards Chabahar in Iranian waters," recounted Aurangazeb, who has also been designated as the informal spokesperson for the group.

On behalf of the group, Aurangazeb almost takes pride in narrating the ordeal of their capture. "We had fished for 50 days when one day suddenly while spreading the nets we saw the Somalian pirates approaching and before we knew they fired gunshots and captured us," an animated Aurangazeb told rediff.com.

That was in December 2010. In March 2011, the Indian Navy rescued the hostages. Now in June 2011, hopefully the group will be reunited with their families in Pakistan.