'The Mahabharata's lessons are eternal' 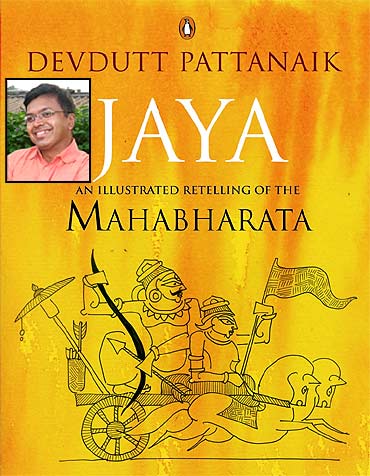 Not many know that well-known mythologist Devdutt Pattanaik is actually a medical doctor. After passing out of Grant Medical College in Mumbai, he worked for 14 years in the healthcare and pharma industries in sales and marketing, and after a brief stint in Ernst & Young as business advisor joined Kishore Biyani of the Future group (the holding company of Big Bazaar and Pantaloon) as chief belief officer.

Pattanaik, a self-taught mythologist, also lectures extensively on the relevance of sacred stories, symbols and rituals in modern times, especially in the corporate world. Besides the Future group, he also consults many organisations such as Star TV and the World Gold Council on issues related to storytelling, leadership and culture.

He has published over 15 books, including 7 Secrets of Hindu Calendar Art (Westland) and Myth=Mithya (Penguin) and now, Jaya: An illustrated retelling of the Mahabharata. What makes Devdutt unique is the accessibility and applicability of his decoding that reaches out to the common man.

In an email interview, the Mumbai-based Devdutt Pattanaik spoke to rediff.com about his latest book on the Mahabharata and the lessons the epic holds for today's times.

Yet another version of the Mahabharata! Why would anyone want to recast Vyasa's grand epic? That too in a grossly condensed form?

There are not many versions that are accessible to the public, as we are led to believe.

The last time I went to the book shop there was C Rajagopalachari, Ramesh Menon, Kamala Subramanium, William Buck, Amar Chitra Katha comics and then fiction works based on the Mahabharata such as Palace of Illusions and the Great Indian Novel.

My book gives the illusion of being condensed. It has more stories, more images, and more information than any other version. There are tales from folk and regional variants and I have related the stories to cultural impact, ritual practices and various interpretations, both rationalist and mythic.

The trick is to capture the soul of the epic and not waste time with unnecessary descriptions and dialogues. Very few people I know are aware of the depth of the epic and the patterns therein. We overestimate our knowledge of Mahabharata. It is extremely poor.

Most Indians own a copy of the Mahabharata. Who will want to read yet another one, albeit an abridged Mahabharata, you think?

Not really. Most Indians do not read. Even B R Chopra's great television serial ends in the 12th chapter, at the end of the war There are six chapters after this and the only thing we know about it is what Amar Chitra Katha chose to tell us.

Image: The cover of Jaya: An illustrated retelling of the Mahabharata. (inset) Devdutt Pattanaik

8 things we didn't know about the Mahabharata 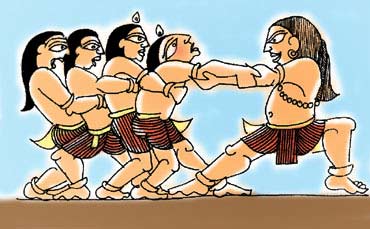 Photographs: Illustration courtesy: Dr Devdutt Pattanaik
What is it about the Mahabharata that drew you into retelling it?

The fact that everyone assumed they knew the Mahabharata. And most storytellers had presented it without actually understanding it so the underlying theme seems rather pedestrian. That there is a vast repository of tales that is inaccessible to most people simply because it is not presented in an accessible form.

Condensing the world's longest epic cannot have been easy. What have you left out from the original, and what criterion did you employ to decide what's to be left out?

I have left out long boring descriptions and dialogues. I have left out repetitions and depth and unrelated side stories. Except the original translations, no retelling tells the 'whole' Mahabharata. Most storytellers have left out the sexual details, the queer tales, the dark violence, the tales that challenge the righteousness of heroes.

How long did the process of writing Jaya take, from conception to execution?

Three years to prepare the manuscript and one year for production.

What, in your opinion, is the best takeaway from the Mahabharata for today's time and age?

The Mahabharata's lessons are eternal. It does not change with time. It simply says that you are not what you have. When you derive your perception of yourself from possessions, you are doomed.

Tell us some facts that most of us Indians are ignorant about the Mahabharata?

2. In the book, the Pandavas are told to kill their father (Bhishma, who raised them as a foster father), their teacher (Drona), their brother (Karna), their uncle (Shalya).

3. Kauravas die and the Pandavas lose all their children: so what was the victory celebrations about?

5. Kunti did not want Madri to have more children than her

6. Gandhari refused to remove her blindfold to see her children

7. Bhima had a son called Barbareek

8. Arjuna had a son called Aravan

How relevant is the idea of dharma, the foundation of Yudhishtra and most of the epic, in today's world? How many Indians even think of dharma in their day-to-day lives?

We assume that dharma is about rule-keeping and so are bewildered why the dharma-keeping Krishna is breaking the rules. As I said, most storytellers retell the story without actually studying the idea of dharma. So what emerges is a pedestrian understanding of dharma.

'Dharma is not about property and power and politics' 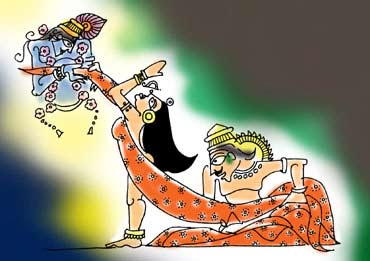 Photographs: Illustration courtesy: Dr Devdutt Pattanaik
When the Pandavas asked the Kauravas for their kingdom, they were told that not even the land that fits on the head of a needle would be given back to them. Is there a parallel from it to the constant fight by several regional groups for their own state and the Centre's absolute refusal to grant it. Whose land is it anyway?

The idea of property is a human construction, made by humans, for humans, without considering the fact that animals and plants have a right to the land too. In order to secure human rights, we violate animal and plant rights. This is cultural delusion. So the very notion of property is adharma. To fight over it as dogs over bones is also adharma.

India and Pakistan -- shades of cousins fighting it out till death in the epic?

Who are the Pandavas here? Mahabharata is Dharma-yuddha or war for establishment of dharma, and dharma is not about property and power and politics.

Do you see a loose parallel between Karna and Arjun and Varun and Rahul Gandhi? Heirs to the same royal family but one of them born at the wrong time.

Similarly, between Sonia and Dr Singh and the epic's Krishna and Arjun?

Such parallels are superficial. They focus on the cosmetics of the epic and not the soul.

What war did the Pandavas actually win? They lost all their children. Imagine if you won a lottery and on that day you are told all your children are dead, would you happy?

This is my problem with earlier retellings of the Mahabharata. Simple data points are ignored and so bizarre interpretations emerge.

I mean. in B R Chopra's Mahabharata, the Pandavas and Draupadi are so happy on the coronation day. Your children are dead, crazy people! The lesson is far more spectacular and transcendental. It is not about winning. It is about dharma. The two are not the same.

Your website says you try to motivate 'people leverage the power of myths/subjective truth in business, management and life'. But business in a competitive world often endorses unethical stances, which is bereft of values (Bhopal, Enron). How does your inspirational perception tackle these 'unholy' trends?

Every time a farm is built, a forest is burned. Ask the birds whose nest was destroyed, if the farmer is holy.

Every time we wear gold ornaments, let us remind ourselves that the gold comes from mining and mining destroys many ecosystems.

The marble on the floor of our house and in our toilets came after mountains were destroyed. Are we holy?

The bull is castrated for the bullock cart. The calf is yanked away so that we can drink cow's milk.

Before we judge corporate houses, let us judge ourselves. Human civilisation is based on the violent domestication of nature. So these 'unholy trends' are part of human civilisation. We just are not aware of it.

We encourage our children to be competitive in schools. This is the sanskar we give them. Why do we get upset when it carries forward into the corporate world?

Recently, in Mumbai, a man died on a railway overbridge. For nine hours no one moved the body, not the police, not the railways, not the passengers. Are we even aware of these unholy trends within the average middle class man?

We are looking for media scapegoats like corporations, when the dark side is not out there, but in our hearts. It is everywhere.

Every moment is the war at Kurukshetra. We just do not realise it because we are too busy being smug that we are the Pandavas.

'Everywhere we find Kauravas who assume they are Pandavas' 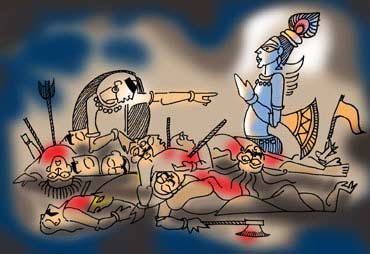 Everywhere we find Kauravas who assume they are Pandavas. So it is very relevant within and even outside the Future group.

Is it practical to follow the Gita's message of karm kiye jaa, phal ki icchcha mat rakh today? Or have we moved to a stage where maybe the Machiavellian strategies in Mahabharata make more sense?

Are you asking for sanction to follow 'unholy' trends? (Laughs) We have the freedom to do what ever we wish. That is the human prerogative. In the end, who loses but us when we choose to ignore the words of God? Let us not claim helplessness simply because we live in 'modern times'.

Why do we Indians love the Mahabharata so, despite its unusual storyline of a woman married to five men, a transvestite killing a grandfatherly figure and almost all the protagonists dying a rather painful death in the last act?

We like the epic because they show the dark side of human character. It recognises that no human being is perfect. It recognises the struggle of humanity to be good. Such honesty is rare amongst Indians, who otherwise enjoy denial.

The painful death you refer to in the last act is actually in the 17th chapter. There is an 18th chapter that uplifts the book to another plane and justifies why the original title of the book was Jaya.

The Mahabharata portrays a time of liberated social mores -- when pre-marital sex, extra-marital sex etc abounded. Today, in contrast, we seem so much in thrall of the moral police. How and when did we regress so?

I don't think this is regression or that was progress. We have to understand the context of 'liberated' sexual behaviour. Each is a function of thought. When there was no concept of property, there was no concept of inheritance, and hence no one cared for paternity, hence it was not necessary to demand marital fidelity of a woman. All things changed when the notion of property emerged.

What does the Mahabharata tell us about ourselves?

That we are still animals, fighting for survival. Only we fight for our imagined self-image. We have not evolved.

What forgotten lessons from the Mahabharata are we condemned to repeat, you think?We forget to empathise, be generous, and share. We exclude people. This will invariably lead to violence. We cannot escape it.
More
Print this
article
ALSO
READ