Two years after the horrific terror attacks on Mumbai by 10 Pakistani terrorists hope seems to have given way to cynicism as people talk less about 26/11 heroes and more about the Commonwealth Games, 2G, Adarsh and housing loan scams. Prasanna Zore finds out.

The security arrangements are adequate but I still feel insecure," exclaims Anand Sawant about how he feels on the second anniversary of 26/11 terror attacks.

He stays in a dinghy chawl a little distance from Chhattrapati Shivaji Terminus where two Pakistani terrorists butchered 56 people in cold blood on November 26, 2008. 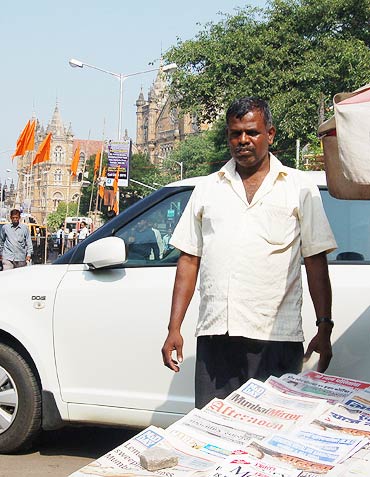 Image: Newspaper vendor Anand Sawant outside CST (in the background)

The furore after the three-day terror seige cost of Maharashtra its chief minister and home minister making people believe that everybody, irrespective of their position and stature, were accountable.

"But now you have this," says a dejected Sawant pointing towards newspapers that he sells which are replete with stories of corruption emanating from different corners of the country.

"Nobody cares for the poor," says he, visibly miffed at the shenanigans of India's political class.

"Did the 26/11 martyrs lay down their lives for people like 'these'? What must their families be going through after reading about these scams?" he asks angrily. 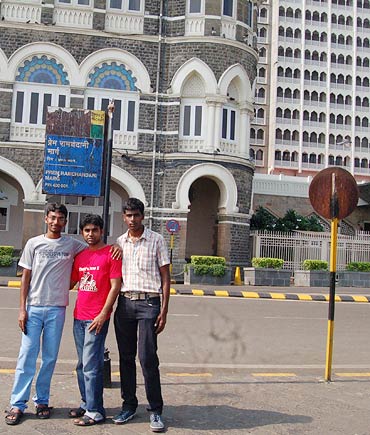 There is corruption everywhere," quips Madan Kumar, a 23-year-old software professional from Bengaluru, who is visiting Mumbai on a project-based tour of the city.

He along with two of his colleagues Rajesh Tubati and Jaya Kumar are hanging around the Taj Hotel under a hot sun to check how the place looks two years later. Two out of the 10 terrorists holed up inside the iconic Taj Hotel, took guests as hostages and ambushed the NSG for three days until both of them were killed.

"Common citizens need security, not corrupt politicians," fumes Madan when asked about security arrangements around the Taj Hotel this afternoon.

"So long as corruption persists we can never feel secure," says his friend Rajesh. "Corruption will always make our internal security vulnerable and we will always be exposed to terror attacks," he says.

Interestingly, for these friends from Bengaluru job security and corruption was more of immediate concerns than their own security.

"The politicians in India are rich because they indulge in corruption. Today they roam around in their cool Mercedes and Skoda cars with Z plus security and people like us discuss our country's future in front of a monument that Pakistani terrorists attacked after they entered the country through the sea route," says Jaya.

"What were these leaders doing? What was the police doing on that night?" questions Madan.

All three feel that we can have a strong security apparatus in place if we elect honest and incorruptible people to Parliament.

"But the only thing our politicians do after getting elected is make money by underhand means," says Rajesh cynically.

"I have reason to be cynical," he asserts. "Look at what's happening in my home state," he says alluding to the goings on in Karnataka where the state chief minister has played the caste card to retain his position despite allegations that he favoured his family in buying government land at below market rates.

"Having said that we are also here to salute the martyrs who died fighting these terrorists in Mumbai," Madan adds.

'Only ministers are visible everywhere. Where are the people?' 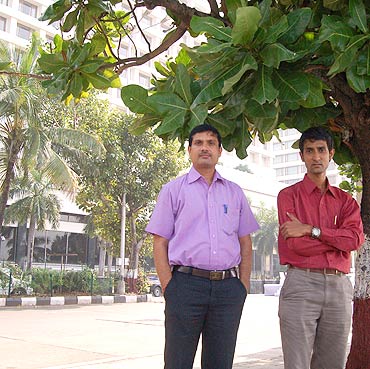 Image: Manoj Kanojia (right) and his friend outside Hotel Trident

You move in and out of Churchgate and CST station through a number of metal detectors placed at the entrance and various exits. But tell me can you make out if they even work or not?" asks Manoj Kanojia sarcastically.

"But read any newspapers front page and you will know for sure the kind of corrupt politicians in town," he says pointing to various scams surfacing from various parts of the country.

He rues that the josh (the energy) witnessed during the first anniversary of the 26/11 terror attacks was sorely missing this year. "Only ministers are visible everywhere. Where are the people?" he asks.

"We are more worried about catching the morning local train than check if somebody has sneaked a bomb under our seats or over our heads," he says.

Kanojia observes that our security arrangements are still not up to the mark. "The metal detector that we pass through every day doesn't even beep when somebody carrying a metal container passes through it," he laughs.

He says the cameras are ubiquitous but what's the point of finding out a terrorist looking at the footage when she or he has committed the act and created havoc.

"Hamari security bahut dheeli hai (Our security measures are not up to the mark)," he says.

Like Sawant, Madan, Rajesh and Jaya, Kanojia too considers corruption as the most serious issue that can undermine India's internal security.

"Look at that cop standing there," he points towards an armed Mumbai cop standing vigil outside the Trident Hotel, another place where terrorists had struck on November 26, 2008.

"You can bribe your way through his vigil even if you were carrying arms on you," he says sort of echoing the sentiments of a lot of people in the city who think that corruption is all pervasive and exists at all levels right from the bottom to the top.