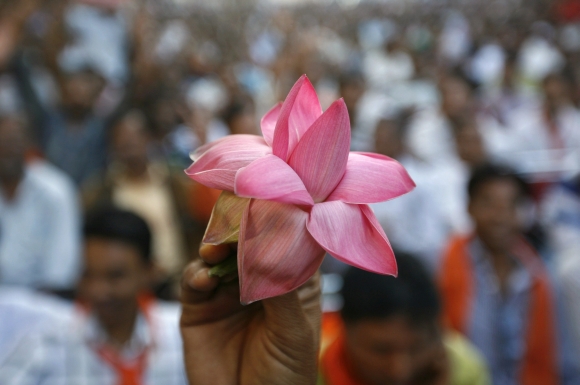 Calling the United Progressive Alliance a 'minority government' and ruling out the possibility of a Third Front government, the Bharatiya Janata Party on Tuesday claimed that the National Democratic Alliance would come to power after the 2014 elections.

Criticising the Congress-led UPA government for "corruption and economic crisis", he said, "India has emerged as a failure before the world, be it on foreign policy or diplomatic relations."

"UPA-II is on its last leg. Cracks are developing within the UPA. Their allies like the Dravida Munnetra Kazhagam and Trinamool Congress have withdrawn support. They are no longer a government with a clean majority. They are a minority government," Rudy claimed.

'UPA has never been effective' 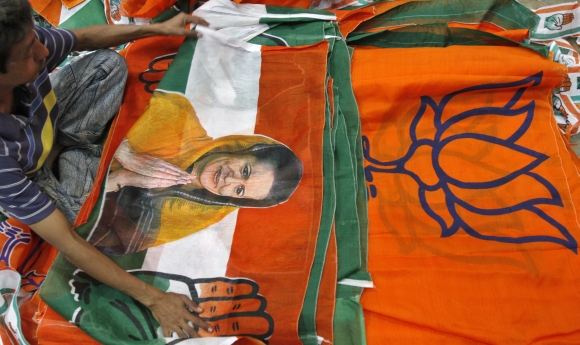 Image: A worker looks at a Congress party flag carrying a picture of its party chief Sonia Gandhi next to flags of BJP
Photographs: Amit Dave/Reuters

"We (BJP-led National Democratic Alliance) will win more than 300 seats in the next general elections. On the strength of our young leadership, we will also form the government in Maharashtra," he said.

Referring to the reported rift between Congress chairperson Sonia Gandhi and Prime Minister Manmohan Singh, Rudy alleged, "The PM has never been at the helm of affairs. There have always been differences between (Gandhi's residence) 10 Janpath and (PM's residence)7 Race Course Road. As a reason, UPA has never been effective in their four-year term."

Rudy also alleged that Dr Singh used the Joint Parliamentary Committee to wriggle out of the 2G spectrum scam case.

The government is "silent" on sensitive issues like the infiltration of Bangladeshis, threat from Pakistan, Chinese incursion and killing of Indian national Sarabjit Singh in Pakistan's Kot Lakhpat jail by other inmates, he said.

'We are open to a debate' 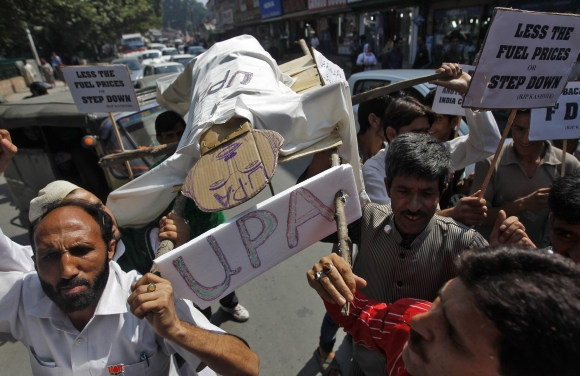 On the Food Security Bill, the BJP leader said, "We welcome the legislation which will provide food to 60 per cent of our population. However, Congress should first sort out the issue with their alliance partner Nationalist Congress Party, which has expressed reservations on the Bill."

"But, instead of calling for a special session of the Parliament, the monsoon session should be advanced. We are open to a debate. On every point, the debate should be held in the Parliament," he said.

He also asserted that although his party was willing to get important legislations -- like the Food Security Bill and the Land Acquisition Bill -- passed, it would oppose the ordinance on the Food Bill.

When asked about the alleged factionalism in the state unit of the party, Rudy said, "I don't think there is any factionalism. We work in an united manner."

Tags:
More
© Copyright 2022 PTI. All rights reserved. Republication or redistribution of PTI content, including by framing or similar means, is expressly prohibited without the prior written consent.
Print this
article
ALSO
READ