In a verdict having far-reaching implications, Pakistan's Supreme Court on Friday declared as 'unconstitutional and illegal' the emergency imposed by former President Pervez Musharraf in 2007.

A 14-judge bench headed by Chief Justice Iftikhar Chaudhry also declared as unconstitutional Musharraf's action of sacking over 60 members of the judiciary who did not endorse the emergency imposed on November 3, 2007.

The bench delivered its verdict after holding deliberations behind closed doors for over five hours.

Action on Judiciary unconstitutional too 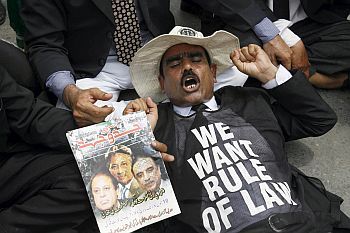 The decision came in response to a petition filed on behalf of two High Court judges who were removed from their positions due to the emergency.

The proceedings in the Supreme Court over the past few days triggered a wide-ranging debate on Musharraf's actions, including the sacking of Chief Justice Chaudhry and over 60 other judges.

The apex court issued a notice to 65-year-old Musharraf to appear before it to explain his actions but he chose to ignore it.

Former Supreme Court Chief Justice Abdul Hamid Dogar, who was handpicked by Musharraf to replace Chaudhry in November 2007, was declared a "de facto and unconstitutional" Chief Justice by the bench. It also said most appointments made by Dogar, with a few exceptions, were unconstitutional. 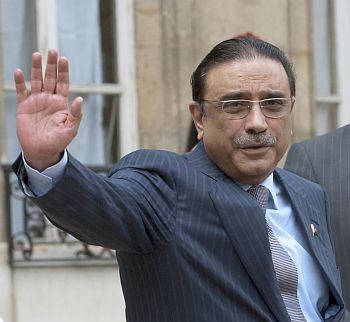 Image: President Asif Ali Zardari waves to media persons
Photographs: Philippe Wojazer/Reuters
During the proceeding, the Chief Justice ruled out the trial of Musharraf on charges of 'high treason' for declaring emergency. He also said the court would not give any judgment that "could damage the system".

The verdict is expected to have significant implications for some 37 ordinances that were issued by Musharraf during the period of emergency, which lasted a little over a month.

Among these ordinances is the controversial National Reconciliation Ordinance, which granted amnesty to Pakistan People's Party leaders, including party chief and President Asif Ali Zardari, in graft cases.

If the NRO is scrapped, Zardari will have to quit the post of President. 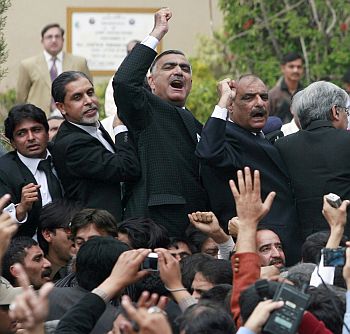 Lawyers across Pakistan held impromptu celebrations after hearing the apex court's verdict. The lawyers, who had gathered at bar association offices in most towns and cities, distributed sweets among the people and danced with joy.

A nation-wide movement by the lawyers and the opposition PML-N in March this year forced Zardari to restore Chief Justice Chaudhry to his position.

Since then, the independent-minded Chaudhry has often taken on the government on a wide range of issues, including the fixation of prices of petroleum products. 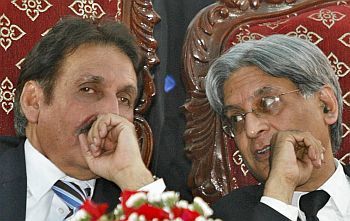 However, there were indications of manoeuvring behind the scenes to ensure that Musharraf, who still enjoys the backing of the army, was not humiliated in any way.

A recent meeting between army chief Gen Ashfaq Parvez Kayani and leading lawyer and PPP leader Aitzaz Ahsan triggered speculation that the military had conveyed a message that the judiciary should not rock the boat.