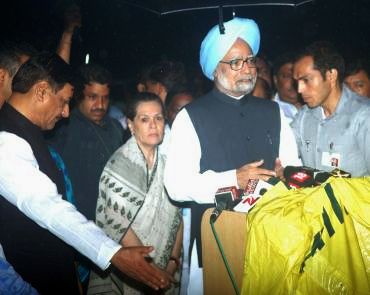 Over 200 relatives, friends and well-wishers of patients waited outside JJ Hospital, their pleas falling on deaf ears. The Mumbai police had its orders: Keep the people out. Savera R Someshwar and Sonil Dedhia report.

They were standing helplessly outside Mumbai's JJ Hospital's critical care unit, held back by rope barricades.

On the other side, guarding the entrance to the building, the constables and senior officers of Mumbai's police force stood firm.

No one was going to be allowed in, not until the prime minister had paid a consolatory visit to victims of Wednesday's serial blasts who had been admitted to JJ Hospital.

Over 200 relatives, friends and well-wishers of JJ Hospital's other patients too waited outside, their pleas falling on deaf ears. The Mumbai police had its orders, and that was to keep the people out.

So the tears of a lady in her late thirties, who was pleading to be allowed to meet a relative who was on his deathbed, didn't matter. The cops merely shook their heads.

Another family, who did not wish to be named, had a less pressing problem. They had brought food for their father, who had been suffering from loss of memory for a few years. "Recently, his hands and legs had started trembling, so we admitted him here. They've asked us to do an MRI," says his daughter.

She was outside the rope barricade, a red and white plastic bag filled with warm dinner, in urgent cell phone conversation with her father who was alone inside. "No, they are not letting us come in," she tried explaining again and again. "Some minister is coming, so there is a lot of security. They will not let us come in until 8.30 pm."

'PM must improve security. Why should blasts like this happen?' 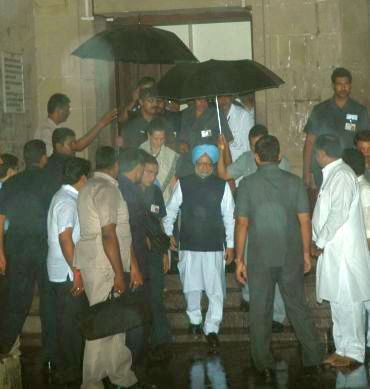 The father said he would come out and meet them. Minutes later, her phone rang. The cops were not letting him out either.

Through the large, barred windows on each floor, some of the patients and those relatives still inside were peeping out. Some were calling out to their relatives. But, as the cops noticed each instance, those inside were rudely moved away before the shades were drawn.

In the end, the daughter prepared to return home. Her father would have to settle for the hospital's dinner of pav (bread) and vegetables. He would also have to stay alone at night, bereft of the comforting company of a near and dear one.

Among the others is the relative of a constable stationed at Arthur Road police station. He had finished his duty and come to deliver food to a relative. His uniformed colleagues on the other side of the barrier stopped him from going inside.

Paresh Kotak, who runs a shop in Crawford Market, was fuming. He had come to meet his employee, Prashant Joshi, who had been severely injured in the blast.

'Is an ordinary man's life not important?' 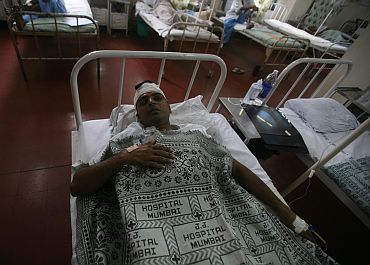 Image: A blast victim at Mumbai's JJ Hospital, a day after the triple blasts, on Thursday.
Photographs: Sahil Salve

Joshi, who works as a clerk for Kotak, was admitted to JJ Hospital on Wednesday night, as his right eye was damaged. He was operated upon and the doctors found metal parts in his brain. Joshi was under observation in the CCU for 48 hours.

"The prime minister is so big, and an ordinary person's life is not important?" Kotak fumed. "I have been waiting outside for the last one hour to go and meet Prashant. It's ridiculous." The angry words flow without pause.

Apart from the barricade outside, how strict was the security at JJ hospital? Picture this: At 5 pm, when we reached the hospital, we walked past a contingent of constables with protective metal headgear and senior police officers. No one asked us for any identification.

The gate to the building housing the CCU was closed, and the cops were letting one person in at a time. Again, we walked in without any identity check.

We easily reached the first floor, where the CCU was located, and which the prime minister was scheduled to visit. We spent over one and half hours there, before we decided to leave.

As we reached the ground floor, we decided to wait until the prime minister arrived. Despite there being cops on every floor, and gates barred on each floor, we made it to the third floor of the building before returning to the CCU waiting room on the first floor.

We were there for another hour before we left.

As we stepped out, cell phones were buzzing. Different conversations were on, but all with the same message: "They're not letting us in, what can we do?"