Modi's 'Chai pe Charcha'? What's that all about? 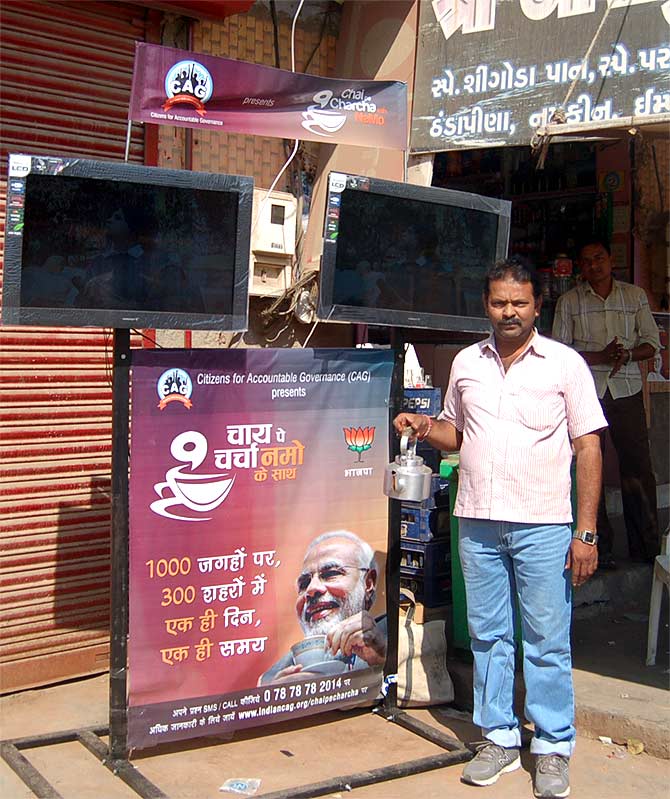 Only the Internet seems to be abuzz with the Bharatiya Janata Party prime ministerial candidate Narendra Modi’s ‘Chai Pe Charcha’ outreach programme. The streets in Ahmedabad and the people that swarm it are blissfully unaware though.

It is noon time outside Naroda Patiya, Ahmedabad, where Jai Ambe Tea Stall, owned by Devidas Dulanomal Khubchandani, is doing brisk business: selling tea and catering to travellers on their way to Gujarat’s different cities.

Devidas’s 25-year-old son Pradeep is giving directions to travellers on which bus to board. A big NaMo Tea Stall poster with Gujarat chief minister Narendra Modi beckoning people to join his much-hyped ‘Chai Pe Charcha’ that will be inaugurated at 5 pm on Wednesday, swings across the shop. 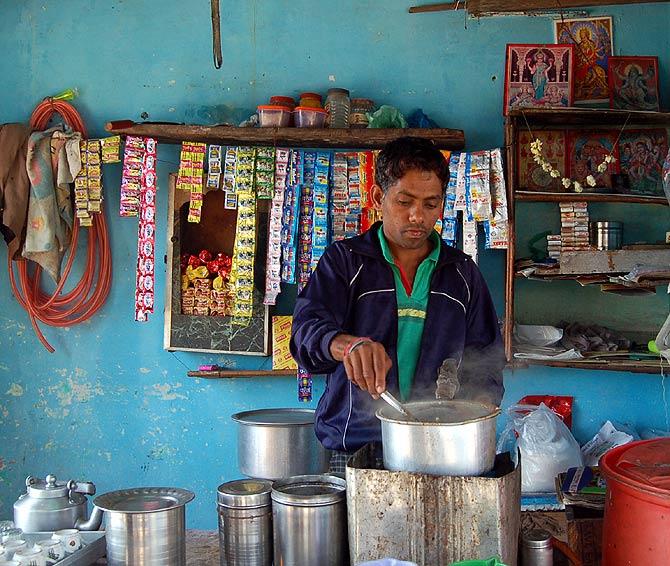 Pradeep and his younger brother Rajesh, who mans the tea stall, are, however, oblivious to what ‘Chai Pe Charcha’ is all about.

Prod them a little more about this programme and they still continue to look at you completely dumbstruck.

Gurjar makes it clear that they have been associated with the rebranding of tea stalls across Ahmedabad as NaMo Tea Stalls, and they were just supporting Citizens for Accountable Governance in their ‘Chai Pe Charcha’ initiative.

“For almost 23 km on the Ahmedabad-Mumbai road we have NaMo Tea Stalls,” he said over the phone.

'What difference will it make to me if Modi comes to power?' 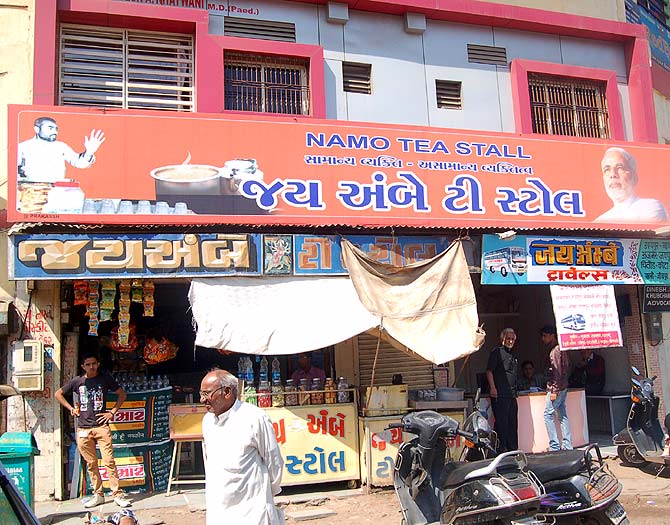 Cross the street from Jai Ambe Tea Stall and you reach a pocket of Naroda Patiya, where Muslims live in ghettos. Mohanbhai Patel, 29, is one of the many Hindus that run their businesses from this area. Mohanbhai runs a small rickety tea stall that was rebranded as NaMo Tea Stall just around the same time that Jai Ambe was.

Mohanbhai, who earns anywhere between Rs 1,000 to Rs 1,200 on a daily basis has no clue why Gurjar and his men stuck the poster around his shop. Like Pradeep, Mohanbhai is equally unaware of what ‘Chai Pe Charcha’ is all about.

“What difference will it make to me if Modi comes to power?” he asks. He then says that whenever Modi’s cavalcade passes the highway facing his shop, the police shutdown all business establishments.

'I would rather keep away from such programmes' 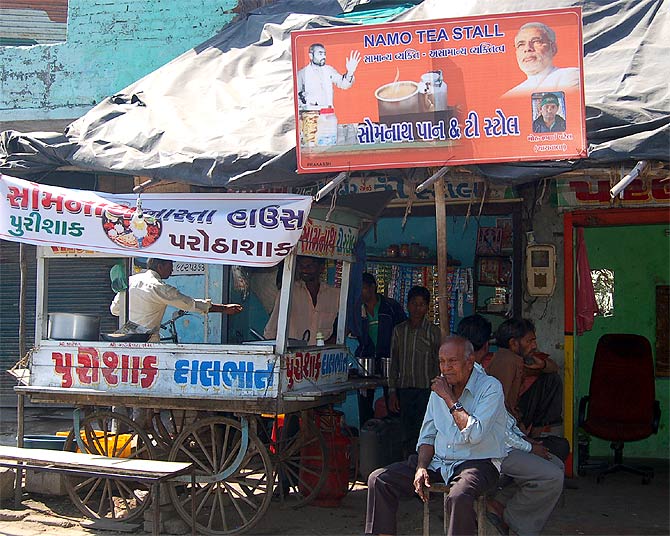 Javed Patel, a resident of Juhapura, says he knows about what ‘Chai Pe Charcha’ is and continues, “I have heard that Modi sahib is going to speak to all Indians through this programme. The 32-year-old foreman shies away from responding when asked what question on governance would he ask Modi if he got a chance to do so. “I would rather keep away from such programmes,” he says.

It is almost 2 pm and finding a single place outside Ahmedabad’s central business district where ‘Chai Pe Charcha’ will be held turns into a huge task.

A tony suburb, buzzing with construction activity, Manohar Villa is a dusty, upcoming residential colony where a lot of Amdavadis (residents of the city as they are called locally) are investing chasing a construction boom in the area and the associated price rise.

“Oh, you mean the talk show that Modiji will be addressing sometime this Sunday?” says one of them. When informed that the programme was being launched this evening they wonder aloud if this correspondent has the wrong information. 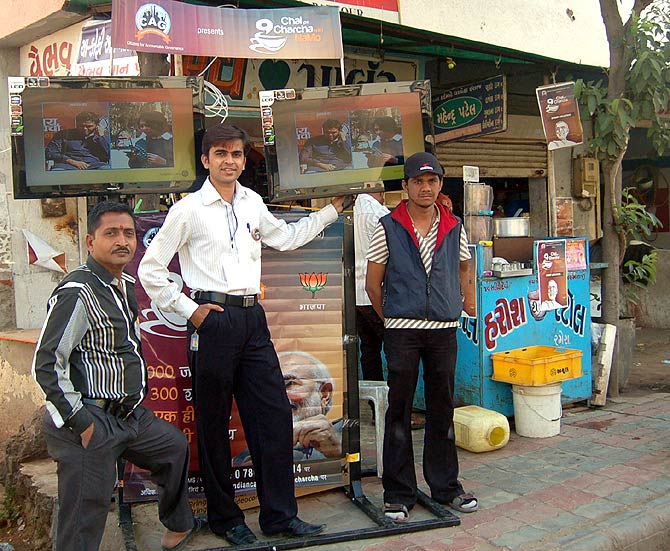 Stepping out of the shop you cross a bank ATM next door, and ask the attendant about ‘Chai Pe Charcha’ and he says, “It’s two shops away!”

Ashapura Paan Parlour, owned by Kaushikbhai G Patel, who also owns a small tea stall, will be one of the places to host Wednesday evening’s ‘Chai Pe Charcha’. When told that the shop next door had no clue that such a programme was to be hosted in his shop, he was speechless. “A sardarji friend of mine asked me if I could allow fixing of two TV sets outside my shop and I agreed,” says Patel about how the programme reached his doorstep.

Paras Shah, a CAG member and the main organiser of ‘Chai Pe Charcha’ at Patel’s shop admits that there could have been some communication gap between the CAG and BJP when it came to promoting the event. He says that they had been making preparations for almost a week now and had put up posters of the event around the colony.

He too is speechless when informed that the next door shop too was ill-informed about where the event was and what its purpose was.

“Perhaps this is the first day of the launch and there is some confusion. But as we progress we are hopeful of spreading awareness and get more people associated with the programme.”

Sumedh Ambokar, another CAG member and a fourth year student of IIM-A, who has organised a similar exercise at Himmatlal Park in the heart of the city says that he was quite charged to work for a programme that will help Narendra Modi become India’s prime minister.

“I want change at the Centre. I want the policy paralysis to end and I want strong economic growth which Modi can bring about effortlessly,” he says.

However, he too agrees that out of the seven places where ‘Chai Pe Charcha’ will be telecast live, not more than 100 to 150 people will listen in to their chief minister discussing issues of good governance.