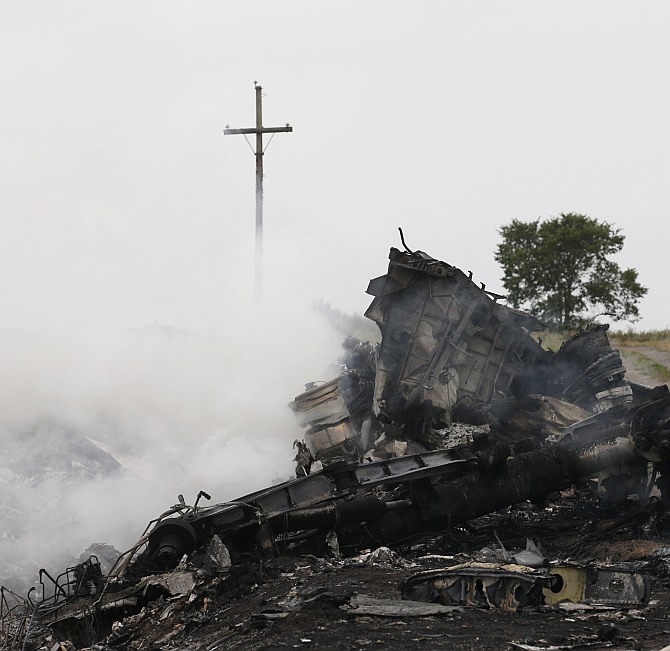 Image: The site of the Malaysia Airlines Boeing 777 plane crash is seen near the settlement of Grabovo in the Donetsk region
Photographs: Maxim Zmeyev/Reuters

Several hours after Malaysia Airlines flight MH17 was shot down over Ukrainian airspace, global outrage seemed to be aimed at Russia

Let’s take a look at what world leaders are saying:

The White House quoted US President Barack Obama as saying, "He (Obama) noted that in the face of extensive evidence that Russia is significantly increasing the provision of heavy weapons to separatists in Ukraine and Russia’s failure to take other steps set out by the United States and Europe to de-escalate the crisis, it was necessary to impose additional sanctions, consistent with the clear statements from the United States and our allies following the G-7 meeting in Brussels."

"He noted that Russia would face continued costs and isolation unless it takes these concrete steps. The President emphasized that Russia and the United States have a shared interest in supporting a stable and prosperous Ukraine."

This looks less like an accident than a crime: Australian PM 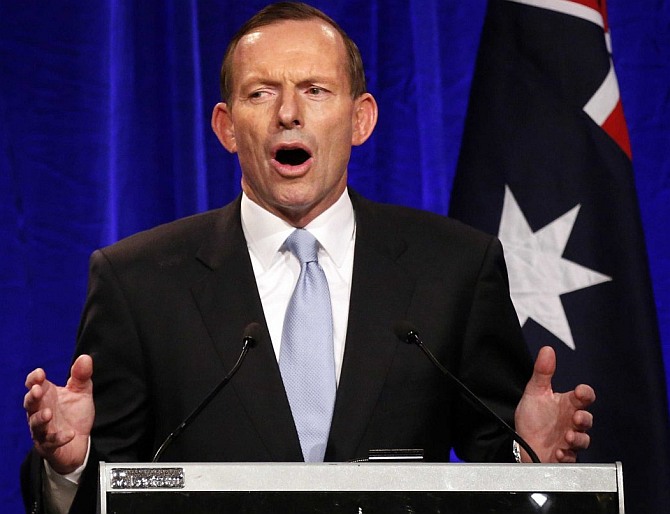 "This looks less like an accident than a crime," he said in a sombre speech to Parliament.

"The bullying of small countries by big ones, the trampling of justice and decency in the pursuit of national aggrandisement, and reckless indifference to human life should have no place in our world."

Blown out of the sky: US Vice President 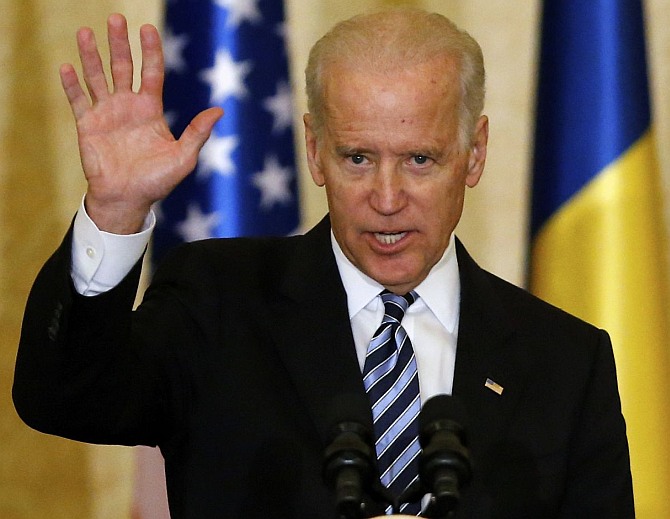 US Vice President Joe Biden said the plane had "apparently had been shot down. Shot down, not an accident. Blown out of the sky."

"We see reports that there may have been American citizens on board and obviously that's our first concern. And we are now working every minute to confirm those reports as I speak," Biden said at the start of a conference address in Detroit.

"This is truly a grave situation. Nearly 300 souls have been lost. The families have our consolation and our prayers. And there are many of them who need answers, and we will get those answers and we will take the next steps accordingly. We are in touch with the Ukrainian government, I was on the phone as I said for the better part of half an hour with President Poroshenko, I'm in contact with our president, as well as our national security team." 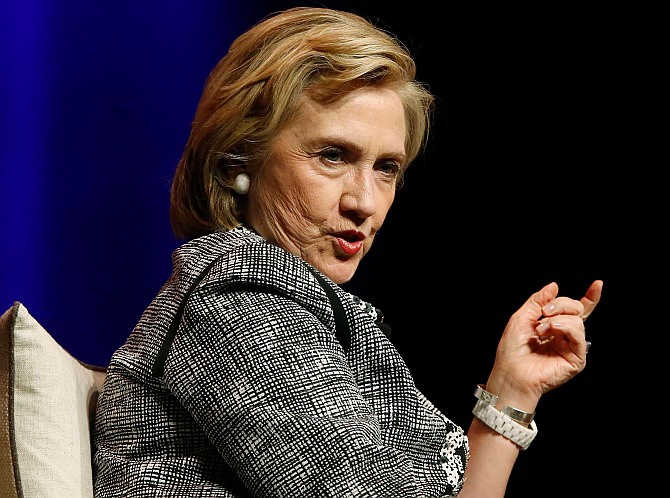 Former US secretary of state, Hillary Clinton, made some of the most potent remarks in a television interview, saying there were strong indications Russian-backed militia were to blame and action was needed to "put (Vladimir) Putin on notice that he has gone too far and we are not going to stand idly by".

Clinton, in an interview with Charlie Rose on the American PBS network, said: "The questions I'd be asking is, number one, who could have shot it down? Who had the equipment? It's obviously an anti-aircraft missile. Who could have had the expertise to do that? Because commercial airlines are big targets, but by the time they got over that part of Ukraine they should have been high, so it takes some planning [to target such a plane].

"And the Ukrainian government has been quick to blame it on terrorists, which is their name for the Russian insurgents. And there does seem to be some growing awareness that it probably had to be Russian insurgents. Now, how we determine that will require some forensics, but then if there is evidence pointing in that direction, the equipment had to have come from Russia. What more the Russians may or may not have done, we don't know."

We must - and we will - find out what happened: Malaysian PM 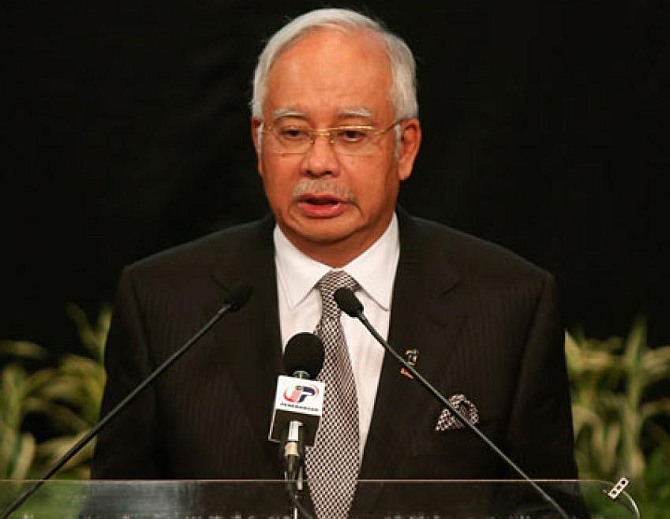 Malaysian President Najib Razak, said international investigators must have full access to the crash site and the terrible and deeply shocking news marked “a tragic day in what has already been a tragic year for Malaysia”, referring to the earlier disappearance without a trace of Malaysia Airlines flight MH370.

Najib said the government of Ukraine had pledged a full and independent investigation and would negotiate with rebels to ensure a humanitarian corridor to the crash site.

Najib said: “We must -- and we will -- find out precisely what happened to this flight. No stone can be left unturned.”

Circumstances in which the plane was shot down is shocking: German Chancellor 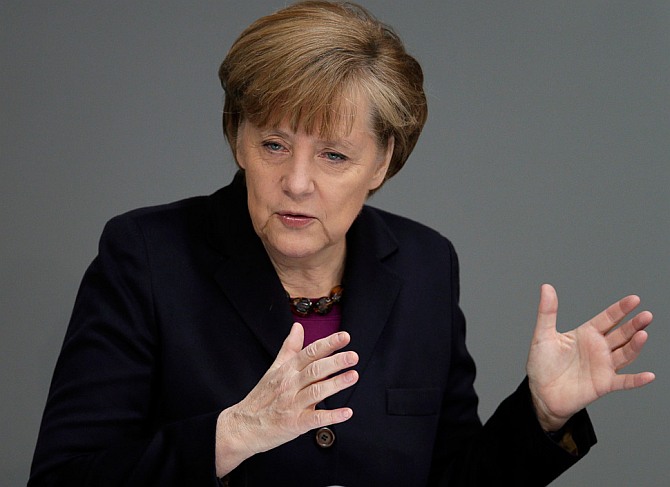 German Chancellor Angela Merkel called for an "immediate, independent investigation into the causes of the crash".

German government spokesman Steffen Seibert said in a statement. "For the chancellor, the suspected circumstances in which the plane was allegedly shot down from a great height are shocking."

"If this news is confirmed, she said it would represent a further tragic escalation of the conflict in eastern Ukraine," Seibert added. 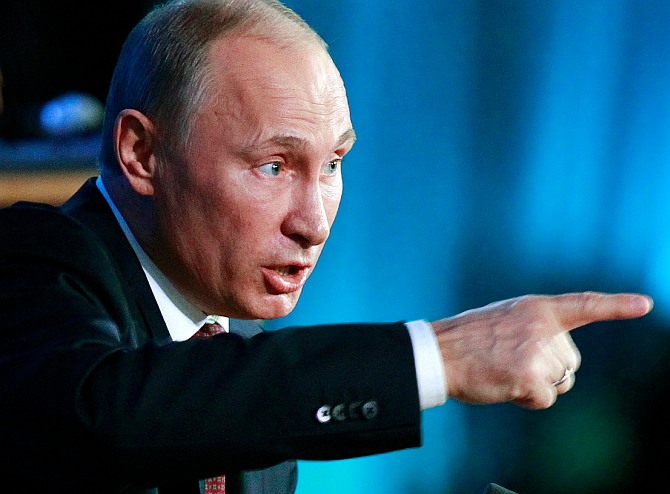 “I want to point out that this tragedy wouldn't have happened if there was peace in this land, or at least if fighting hadn't resumed in the southeast of Ukraine. And undoubtedly, the state on whose territory this happened is responsible for this awful tragedy."

“We will do everything -- everything -- within our power, at least, so that an objective picture of what happened is available to our public and the public of Ukraine and the world. Such things are absolutely unacceptable.”

Our thoughts and prayers are with the families: PM Modi Prime Minister Narendra Modi condoled the loss of lives in the Malaysian airline tragedy and said India stands with the families of victims in this hour of grief.

"Our thoughts and prayers are with the families of those who lost their lives on board Flight MH17. We stand with them in this hour of grief," he said in a tweet.