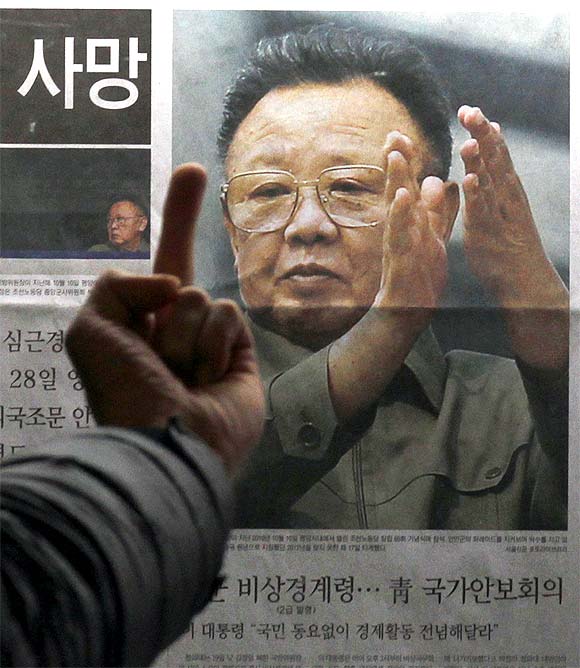 Image: A man reacts at a picture of North Korean leader Kim Jong-il as he reads the reports of his death on the newspaper company's display board in Seoul
Photographs: Kim Kyung-Hoon/Reuters

Though President Barack Obama is yet to voice America's approach to the new North Korean "Respected Comrade", top United States lawmakers have wished his father, the late Kim Jong Il, "a warm corner in hell", alongside the likes of Muammar Gaddafi, Osama bin Laden, Hitler and Stalin.

"The world is a better place now that Kim Jong-Il is no longer in it," said Senator John McCain, a Republican lawmaker who unsuccessfully contested for the President in 2008.

McCain was not alone as several other lawmakers said that Kim, called "Dear Comrade" by his colleagues, had subjected his people to "dire poverty and cruel oppression under one of the most totalitarian regimes the world has ever known."

'His death represents an opportunity' 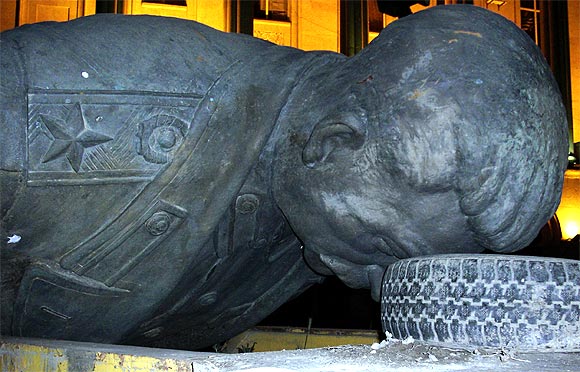 Image: The statue of Soviet dictator Josef Stalin is seen after it was dismantled at his hometown of Gori
Photographs: Nino Chibchiuri/Reuters

"I can only express satisfaction that the Dear Leader is joining the likes of Gaddafi, bin Laden, Hitler and Stalin in a warm corner of hell," McCain said as he urged China to play a lead role as a responsible world power.

Texas Governor and Republican Presidential candidate Rick Perry said there was a window of opportunity to help the people of North Korea after the death of its leader, by encouraging Beijing to work towards a peaceful transition from a grim dictatorship to a free Korea.

Another Republican White House hopeful Mitt Romney said Kim Jong-Il was a ruthless tyrant who lived a life of luxury while the North Korean people starved.

"His death represents an opportunity for America to work with our friends to turn North Korea off the treacherous course it is on and ensure security in the region. America must show leadership at this time," Romney said.

'Now is not the time for talk of new beginnings' 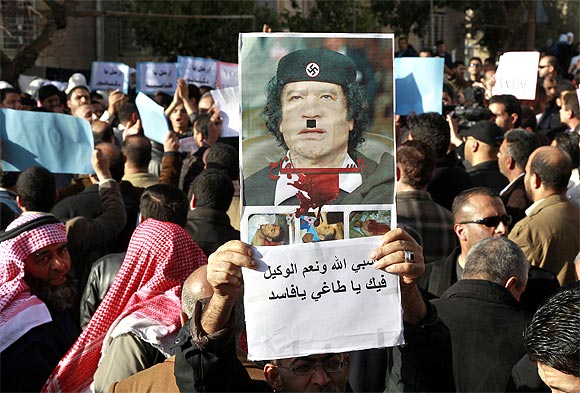 Image: A protester holds up a poster of Libyan leader Muammar Gaddafi defaced as Adolf Hitler during a demonstration
Photographs: Muhammad Hamed/Reuters

Congressman Ed Royce, a senior member of the House Foreign Affairs Committee, said the transition is less stable than it may appear.

"Now is not the time for talk of new beginnings and food aid. We should be doing what we can to delegitimize this succession," Royce said.

'The worst of the worst human rights abusers' 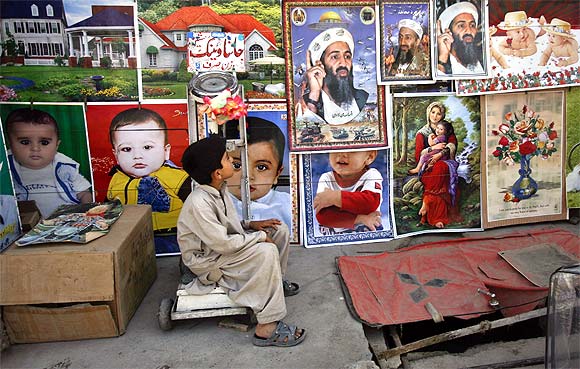 "He will be remembered among the worst of the worst human rights abusers in history. His paranoia made him a monster at home and a dangerous rogue abroad who threatened global security through his reckless policies and behaviour," she said.

"It is important that we gain a solid understanding of who is in control of the country, particularly its missile and nuclear capabilities, and revisit our policies accordingly," the Congresswoman said.

Jon Huntsman, another Republican presidential candidate, said in the short-term, the US must pay extremely close attention to the disposition of North Korea's nuclear bombs, nuclear material, and other elements of their WMD programmes and use all available pressure points to prevent rogue activities and proliferation.

Tags: PHOTO , MORE
More
© Copyright 2022 PTI. All rights reserved. Republication or redistribution of PTI content, including by framing or similar means, is expressly prohibited without the prior written consent.
Print this
article